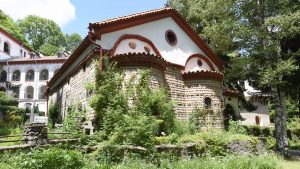 The monastery is located in Vitosha Mountain near the river of Dragalevtsi, next to the route leading to Cherni Vrah and Aleko Chalet, about 1 km from Sofia Dragalevtsi residential district.

The monastery known as Holy Mother of God of Vitosha was founded by Tsar John Alexander as a stavropegial monastery as revealed by the chrysobull of Tsar John Shishman, confirming its privileges. After the conquest of the region of Sofia by the Turks in 1382 the monastery was devastated. In 1476 Sofia boyar Radoslav Mavar (The Moor) restored it, renewed the church and ordered the paintings. In the 15th-17th cc. the monastery was an active literary center and occupied a leading position among the monasteries of the so-called Sofia Holy Mountain.

Only the main church survives from the old monastery complex. The monastery church (5х12 m) is a single-naved, massive building with a dome and a narthex. The altar features one wide apse and three small niches in the depth of the walls. It is distinctive for the characteristic cell construction typical of that period. About 1818 (judging from the date on the iconostasis) another nave was added to the north, expanding the old church. The building was replaced in 1915 by another which only lasted until 1932 when the church acquired its present looks. After a project made by architect A. Rashenov and architect P. Koichev from the north a second naos was added, dedicated to St. Menas, the wall in between was torn down and a shared iconostasis was mounted. The two churches are covered by one roof. At the same time the shared open narthex from the north and the west was also added.

The original murals covering the walls and the vault of the naos and of the narthex are dated by a donor’s inscription above the door on the western wall of the narthex. Radoslav Mavar, together with his wife Vida and his sons Nicholas Gramatik and Stachias in 1476 commissioned the decoration of the temple. In style and iconography these frescoes belong to the so-called Ohrid Artistic School and share some features with the frescoes of the monastery church St. Demetrius near Boboshevo (1488).

According to the graffiti, not later than the end of the 15th c. by commission of pilgrim Kraislav the western facade was decorated. In the lunette above the door there is an image of the Mother of God with Child enthroned, flanked by angels. In the first register at the sides of the door are depicted Daniel in the den of lions (north) and the Seven sleepers of Ephesus (south), of which only fragments survive. At both sides of the patron niche and in the lunette above are presented saints on horseback – on top is St. George, below him are St. Demetrius and St. Mercurius.

Unclear when (according to the graffiti not later than the middle of the 17th c) with the funds of the pilgrim Kalist, depicted in the eastern end, the northern outer wall of the original church was decorated, probably after the construction of a covered gallery. There are full-length depictions of 27 saints, divided into 4 groups, mainly monks, together with St. Nicholas, St. Petka, St. John of Rila and the donor himself in a praying position.

According to M. Kovachev until 1925 the southern facade was also covered with frescoes that were already badly damaged.

Frescoes of the end of the 16th c.

Around the end of the 16th c. the naos of the church was decorated. M. Kovachev pays attention to the bad condition of this layer which crumbles and is rather discolored. Therefore, the whole program cannot be seen. In the 1980s the restoration of the church began and some of the later murals were taken off and transferred onto a new foundation. Today they are exhibited in the monastery. Based on the information of the demounted fragments, from the publications of M. Kovachev and from the restoration documents we can restore the following images:

On the eastern wall above the apse concha there was an image of Ascension, in the apse concha – Theotokos Wider than Heaven, underneath – the Communion of the Apostles where Christ is depicted twice, and in the bottom – Adoration of the Sacrifice. In the eastern end of the northern wall there was a scene of the Vision of Peter of Alexandria and in the prothesis niche – Pieta. None of the big medallions on the long side of the vault survives but probably in its eastern end there was a shining cloud with Christ and Angels of the Ascension. At both sides of the vault there were prophets in medallions. Norther half – Job, Habacuc, Isaiah, Ezekiel, Daniel, Elijah and Jeremiah and to the south – Micah, unknown, Jacob, Simeon, Noah, Jesse, Gideon, etc. In the vault and on the walls there were two registers with scenes of the Christological cycle. The surviving are: Nativity, Presentation, Baptism, Entry into Jerusalem, Crucifixion, Lamentation and the Myrrhbearers at the Tomb of Christ. In a better condition are the paintings on the western wall. On top there was an image of Transfiguration with St. John of Damascus and St. Cosmas of Maiuma. Above the door there was the Dormition of Theotokos and to the north – the Supper at Emmaus.

On the southern and northern walls there are three rows of saints. The top row is occupied by figures of bishops. On the southern wall there once were the images of St. Ignatius, St. Euthymius, St. Dometianus, St. Mele(n)tius, St. Leontius and St. Polycarpus and next to the window is St. Jacob; on the northern wall respectively St. Gregory, St. Vlasius, St. Spiridon, St. Athanasius, St. Dionysius, St. John the Merciful. Underneath there is a frieze with martyrs in medallions. On the southern wall: St. Orestes, St. Mardarius, St. Eugenius, St. Auxentius, St. Eustratuis and under the window – St. Agapius and St. Epsychius (!); on the northern wall – St. Menas, St. Victor, St. Vicentius, St. Jacob the Persian, St. Bacchus, etc. At the bottom there used to be full-length depictions of saints. From them only a few images survive fragmentarily. From the southern wall are preserved the figures of the healers Cosmas and Damian, St. Tryphon and another young martyr. Probably on the northern there used to be warrior saints (St. Theodor) and on the western wall, north of the door – St. Constantine and St. Helena, and St. Pantaleon.

The fresco fragments of the second layer in the naos of the church of the Holy Mother of God of Vitosha of the Monastery of Dragalevtsi display numerous similarities with the murals of the Kurilo monastery church, for instance the standing figures of bishops in the naos, the rare scene of the Supper at Emmaus, as well as a similarity in the style and some common paleographic and linguistic features in the inscriptions. All of the above allows us to believe that the monuments were the work of one icon-painting atelier and to date the frescoes from the monastery of Dragalevtsi soon after the frescoes in Kurilo, that is around the end of the 1590s. 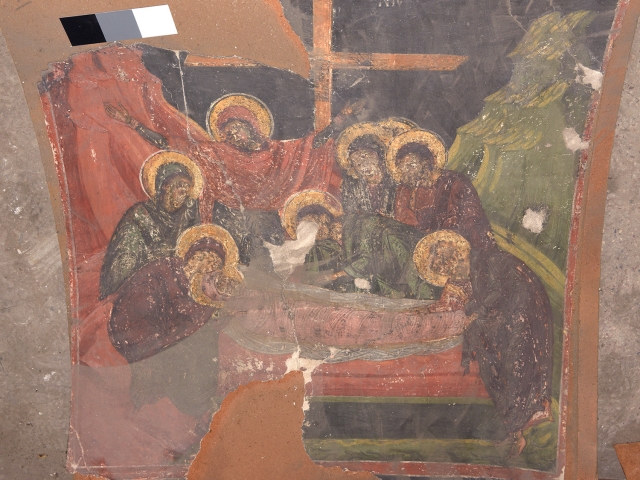 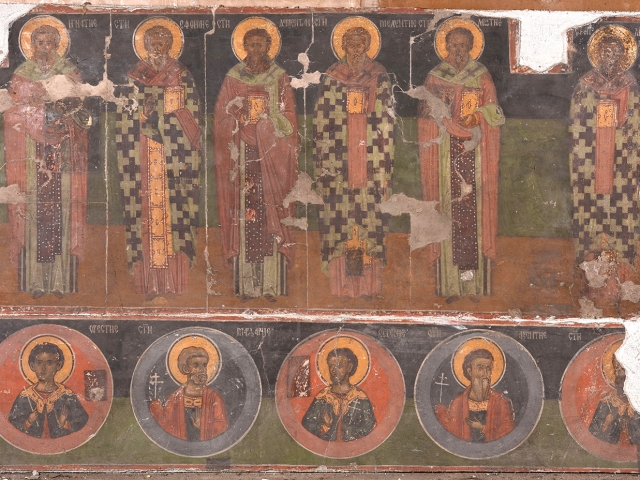 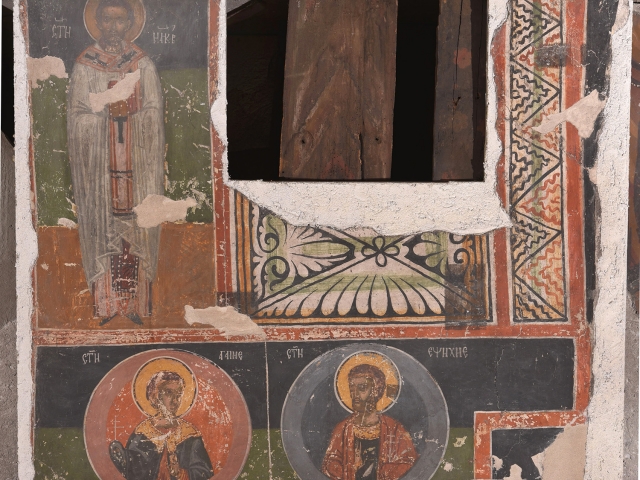 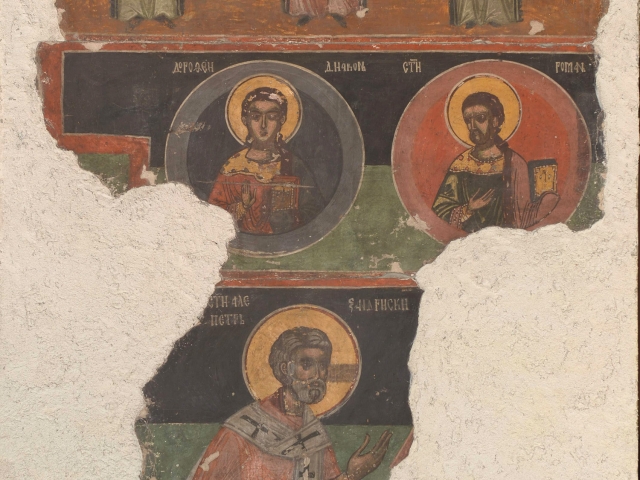 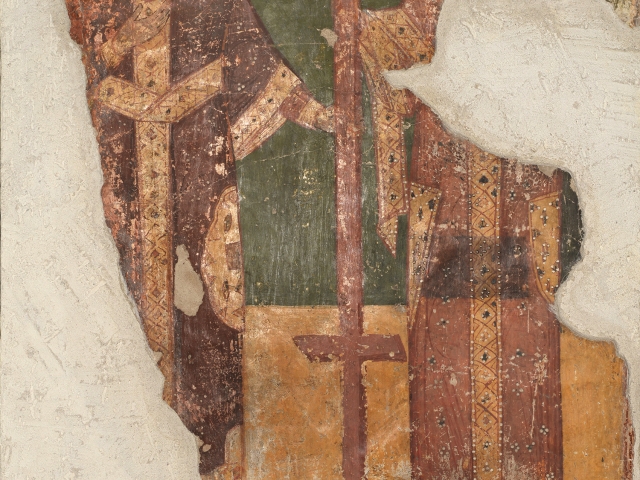 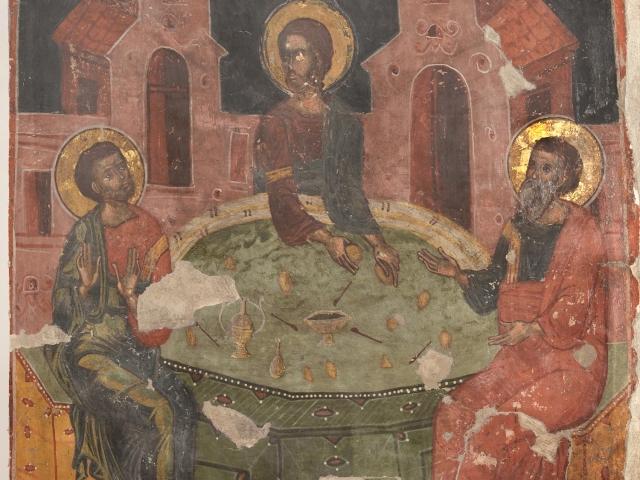