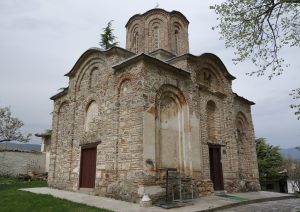 St. Nicetas Church near Čučer, view from the southwest

The church is situated at about 15 km northwest from the town of Skopje, Republic of Macedonia. It is located at an equal distance from the villages of Čučer, Banjane and Gornjane in Skopska Crna Gora.

St. Nicetas Church is known as a zaduzhbina – a temple built for the salvation of the soul, of a ruler of Serbian King Stefan Uros II Milutin (1282-1321). In all probability the initial monastery church was founded between 1183 and 1192 by the grand zhupan Stefan Nemanja, but it is also possible for this to have happened earlier, in the 11th-12th cc. at the commission of an unknown Byzantine aristocrat.

The building is solid, made of stone and brick, with brick decoration. The outside dimensions are as follows: 11.5 m length, 7.7 m width and 12.8 m height. The church is of the cross-in-square type with a dome and an octahedral drum. The dome is supported by four rectangular pillars connected with vaults. The facades are decorated with blind arches. The entrances to the temple are two: from the south and from the west.

The semi-destroyed about the middle of the 16th c. high parts of the church were restored by the end of the same century and a single-nave vaulted chapel was added in the eastern half of the southern wall of St. Nicetas. The chapel was decorated and dedicated to St. John the Baptist. It was destroyed in 1928 on demand of Metropolitan Barnabas.

Some architectural reconstructions were also carried out in 1846 when with the donations of priest Uroš and hadji Trayko Doicinović from Skopje the destroyed dome was restored and a vast space (the so-called sofra) was added to the west and to the south of the church; it served as a narthex and was also destroyed in 1928.

The earliest frescoes were created between 1322 and 1324 and are among the classical monuments of the art of the Palaeologean period. They occupy almost entirely the church’s interior and were made by the famous Thessaloniki master Michael Astrapa and icon-painters of his atelier. Until recently on the basis of the reading of the icon-painter’s signature on the shield of St. Theodore Tyron it was believed that the masters were two: Michael and Euthychius.

In 1483/1484 the frescoes were ‘restored’ by anonymous but very skilled Kastoria icon-painters. Form the paintings of the end of the 16th c. there are only some fragments in the western part of the southern facade of the church. The eastern part used to be occupied by the chapel of St. John the Baptist, which is now destroyed.

In 1846-1847 the Debar icon-painter Dicho Zograf (Dicho Krustević) decorated the dome and painted some icons for the new iconostasis.

The date of the re-decoration at the end of the 15th c. is stated in the donor’s inscription above the southern entrance. Since the icon-painters who ‘restored’ the church have kept and followed the original murals, sometimes it is very hard to distinguish between the old and the new frescoes. Some of the original images have been restored partially (for example the heads of St. Peter and of Archangel Michael were painted in the 15th c. but their bodies are from the 14th c.; parts of the scene of Christ’s Baptism were also restored), while others have been painted on entirely new plaster in 1483/1484. The latter painting layer occupies mainly parts of the lower registers of the pilasters, the vaults, as well as parts of the second register on the southern and the northern walls.

In 1483/1484 the eastern parts of St. Nicetas were decorated with the scenes of Ascension and Pentecost (eastern vault, altar); Archangel Gabriel from the Annunciation scene (western wall on the northeastern pilaster); an illustration for the first canon for Holy Saturday “Up on the throne, down in the grave” (northern wall in the arch between the southeastern pilaster and the eastern wall, above the entrance to the prothesis). 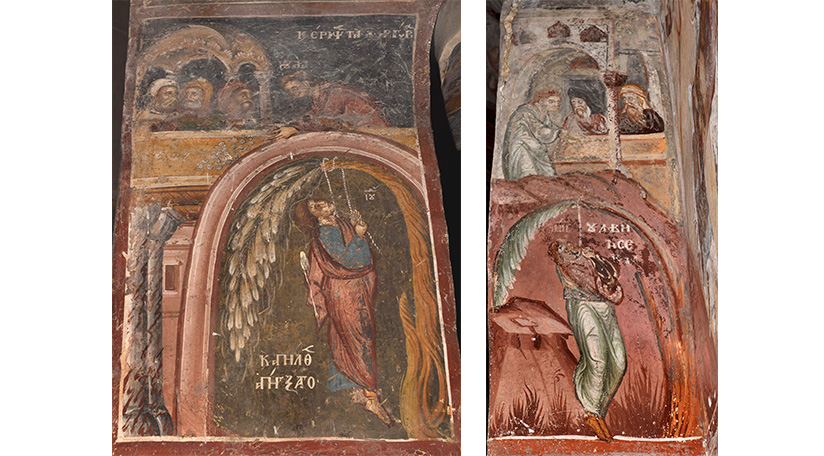 Rebellion and Suicide of Judas, St. Nicetas Church near Čučer and Treskavec Monastery

St. Nicetas Church is among the works defined as works of the chief master who is responsible for the establishment of the leading atelier of the Kastoria artistic production of the 1480s-90s. The surviving monuments reveal that the atelier was especially active for a period of about four years in the 1480s. The atelier brought forth the icon-painting teams that worked in different areas of the Balkan Peninsula until the end of the 1530s. Among the works of this atelier are the murals in the Old catholicon of the Transfiguration Monastery (Great Meteor, 1483), part of the frescoes in the Dormition Monastery (Treskavec, 1483/1484) and in St. Nicholas of Nun Eupraxia in Kastoria (1486), as well as the fragments in the church of St. Peter and Paul in Aiginio (Pieria, Greece, 1485). 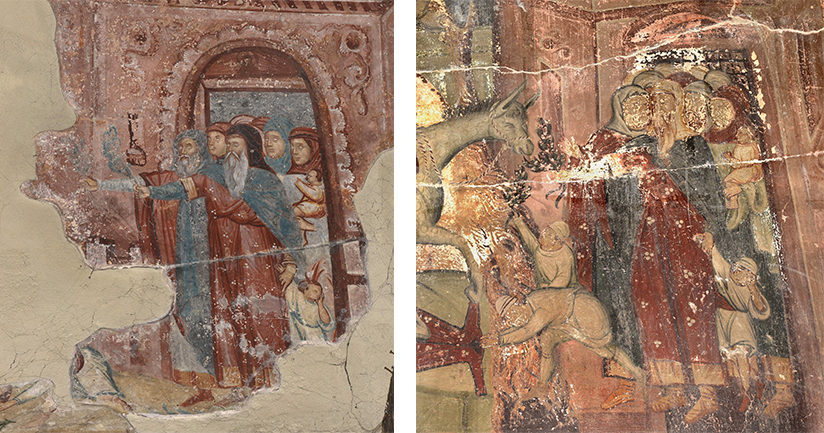 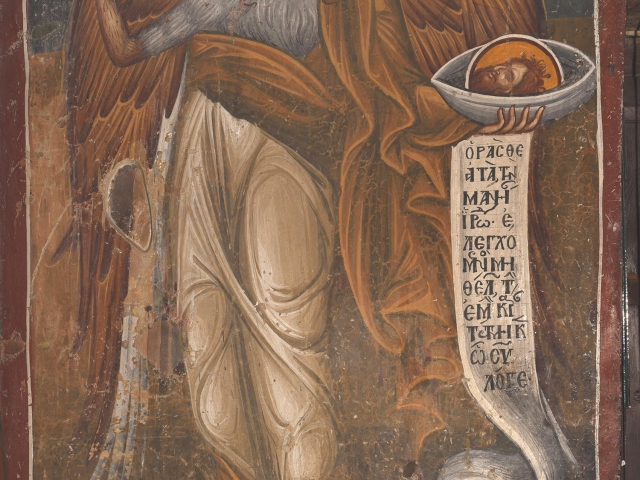 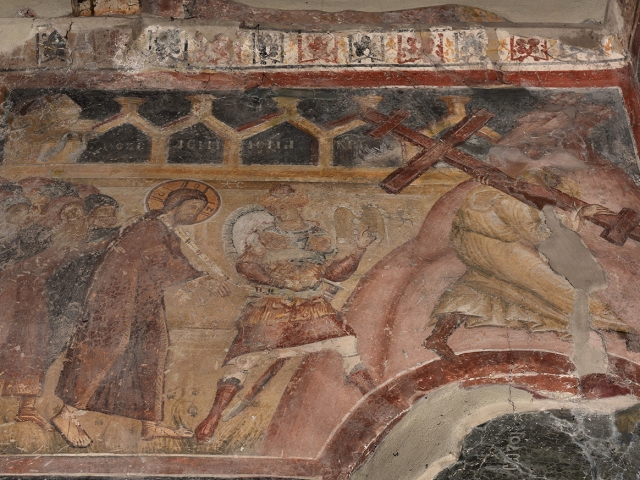 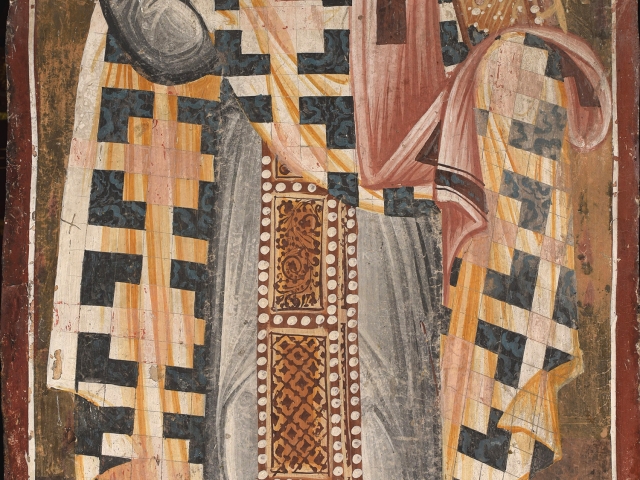 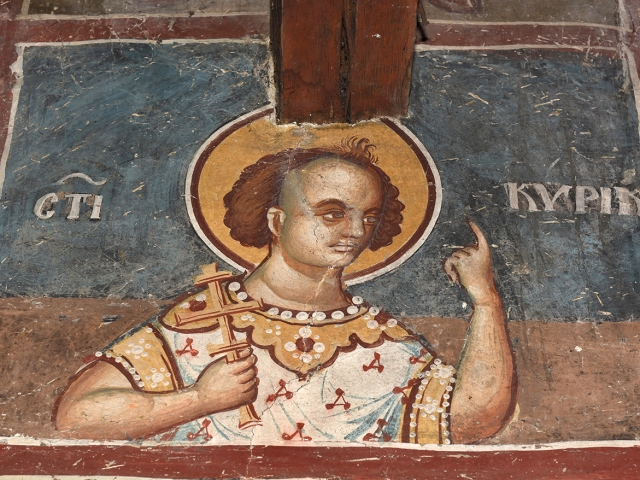 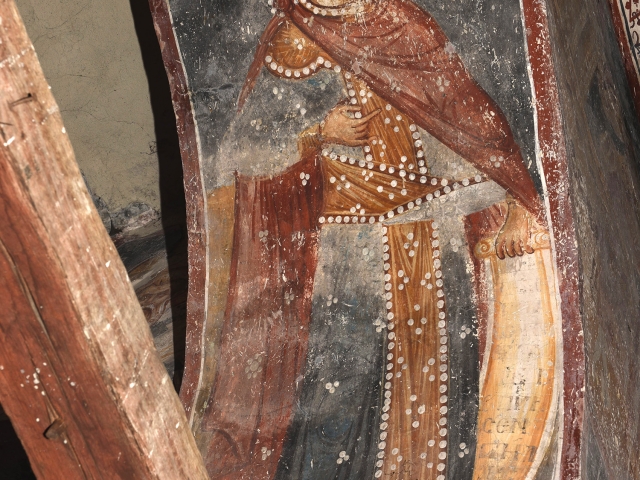 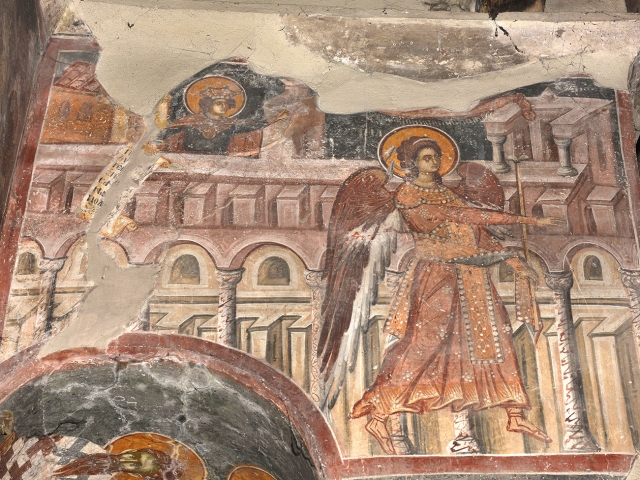 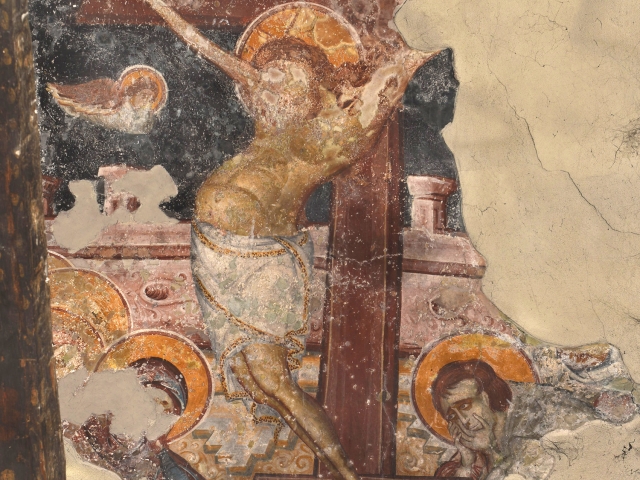 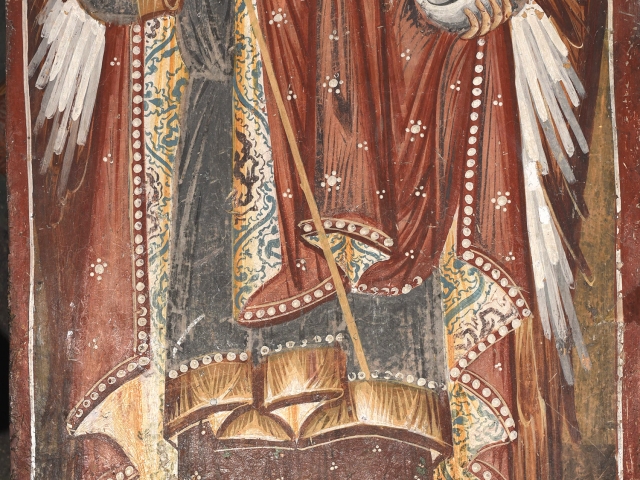 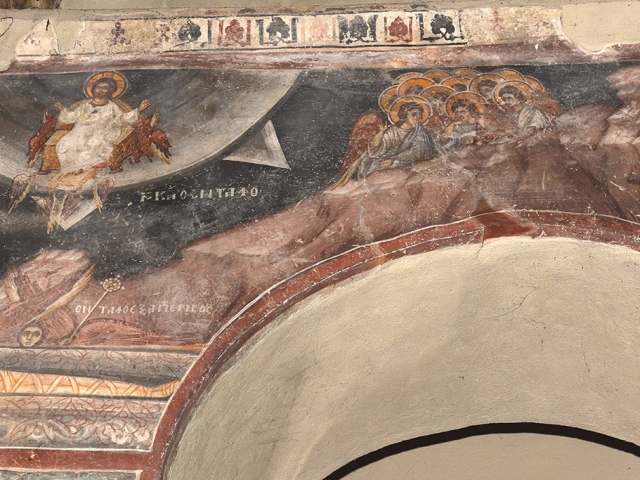 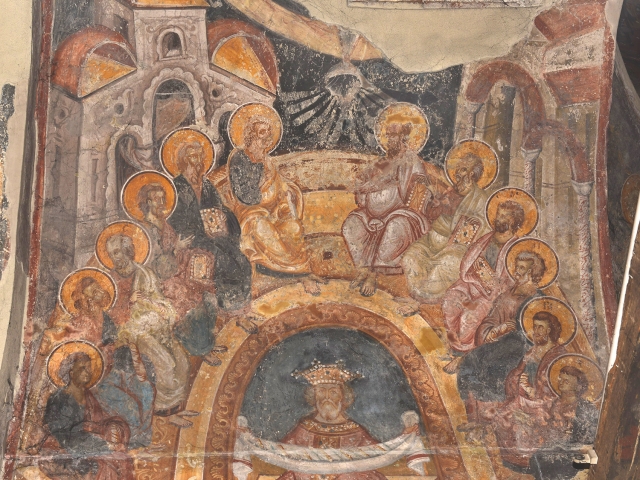