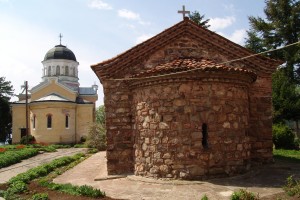 Churches of the Monastery of Kremikovtsi from the east

The Kremikovtsi Monastery is situated at about 3 km to the North of Sofia quarter Kremikovtsi in the locality of Gradishteto on the southern slope of Stara Planina. The monastery is active and welcomes pilgrims and visitors on a daily basis.

Legend has it that the church of Kremikovtsi is part of the so-called Sofia Holy Mountain and that it was among the temples erected by King Ivan Alexander. In fact, we have no data confirming or rejecting this thesis. What is certain though is that after the end of the 15th c. the Kremikovtsi Monastery became one of the foremost Orthodox centers in Bulgarian lands and it is no accident that the donor of the monastery was the very Metropolitan of Sofia. 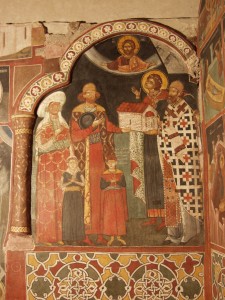 Donor’s portrait, church of St. George in the Kremikovtsi Monastery

There are many written pieces of evidence on the history of the monastery, the main being the mural inscriptions in the church, the Kremikovtsi Gospel with a note dating from 1487, the Kremikovtsi Diptych of the last two decades of the 16th c. – the beginning of the 17th c., several other diptychs and Serbian genealogies of the late 15th – early 16th cc.

The donor’s inscription of the eastern wall of the narthex is the earliest certain evidence of the monastery and the donors: “the Right Reverend Metropolitan of Sofia kyr Kalevit, his son Radivoi, his son kyr Danko, 31st of January 1493”. Below it there is another line announcing the death of Metropolitan Kalevit in 1503. On the donor’s portrait at the northern side of the narthex, next to the images of Radivoi’s two children Todor and Dragana, there’s an inscription that they died in August 1493. During archeological excavations in the northern part of the narthex were discovered the graves of four children who were buried together – probably from the family of the donors.

Later inscriptions are also extant in the monastery, bearing record of the donations of hieromonk Antonius and hegumen Christophor – on the western wall of the naos of 1799; on the altar table of 1800; on a gilded silver plate with an inscription of 1593 part of the wooden casket made in 1804 and containing the holy relics of St. George New of Sofia; an inscription on the church chandelier of 1828.

Plan of the church of St. George in the Kremikovtsi Monastery

The building belongs to the most popular architectural type of the period – the small single nave church, with one apse, a barrel vault and a narthex (naos 6.70 х 4 m; narthex 5 х 4.40 m, height 5 m). It is unknown when and why the nave vault has collapsed. The narthex wasn’t vaulted which is visible in the oblique edge of the murals on the western and the western walls. Initially the church had another exonarthex, which was destroyed at the very beginning of the 20th c. during the construction of the new monastery church. In this narthex the first researchers of the temple have documented a donor’s inscription of 1611 which said that the church was painted with the donation of hegumen Bogoslov and kyr Vasilke from Sofia.

The dating of the original building is obscure – 14th or 15th c, but it was almost entirely renewed and painted in 1493. By all probability, the naos and the narthex have not been erected simultaneously, which is evidenced by their different construction and by the temple model depicted on the donor’s portrait. The naos is built by rubble and brick but no bricks were used in the construction of the narthex.

The preserved paintings cover the whole interior of the church (except for the collapsed vault of the naos) as well as the western façade of the narthex and a fragment in the niche in the western wall of the refectory.

Though close in style, the painting in the separate parts of the naos and the narthex is different. We know for certain that by January 1493 the naos, the eastern wall of the narthex and the donor’s portrait were made by a team of two icon-painters. Almost immediately after that different icon-painters decorated the other three walls of the narthex. Their handwriting is very close in time and style but no exact dating can be given. On the one hand, the date of the children’s death written on the donor’s portrait is August 1493, that is about 7 months later than the donor’s inscription itself. It is possible that the children died at the time when the first team was finishing their work in the temple, for instance on the iconostasis. The icon Christ Pantocrator, which is presently in the Crypt, is executed by the chief master who worked in the naos. On the other hand, the probing done during the restoration activities in the upper part of the donor’s portrait proved that underneath there is another stucco layer with another donor’s portrait.

The Virgin Orans with Christ, the monastery of St. Paraskeve in Brajčino

The Virgin Orans with Christ, the monastery of Kremikovtsi

The Last Judgement composition on the western façade follows older examples but can probably be dated from 1611, as the first explorer of the church pointed out while describing in detail the image of Christ Righteous Judge which is missing from the façade. It was instead painted on the southern wall of the outer narthex.

The painting fragments in the refectory of Kremikovtsi Monastery date from the 17th – 18th c.

In the naos are presented scenes of the Great Feasts, images of prophets, the compositions of Deeisis and St. George killing the Dragon, as well as saints in medallions and full-length figures of saints, most of whom – warriors.

On the eastern wall of the narthex can be seen the most detailed (in 15 scenes) and earliest surviving life cycle of St. George in Bulgarian lands. Especially interesting are the scenes from the Theotokos cycle, the illustration of the Nativity Stychire, the earliest cycle of the Akathist to the Theotokos in the monumental painting in Bulgaria. The two lower registers on three of the walls of the narthex are traditionally occupied by images of saints in medallions, compositions and full-length figures of saints, among which should be noted especially the donor’s portrait, the miracle of St. George and the Dragon and the saving of a child from captivity, the figures of St. Barbarus, Prophet Elijah and St. John the Baptist.

On the western façade of the church in bad condition can be seen the Last Judgement and in the refectory – a fragment depicting St. George on a throne, which was also heavily damaged in a fire.

The iconography and style of the frescoes in Kremikovtsi Monastery are representative of a wide circle of monuments from the last decades of the 15th century and the first decades of the 16th century, connected with Kastoria (Northern Greece) – a main artistic center on the Balkans in that period. The earlier and most outstanding examples are at the Old Catholicon of the Great Meteor (1483), the St. Nicholas Church of Nun Eupraxia in Kastoria (1486), as well as some of the frescoes in the Dormition Monastery (Treskavets, 1483) and St. Nicetas near the village of Chucher (Baniani, 1483) in the Republic of Macedonia. The works of the monumental painting and iconography of that artistic circle can be found in the territory of almost all modern Balkan countries, too. They revise the traditions of the Palaeologan art of the late 14th c. in line with the new historical conditions of the Orthodox population of the Empire. Characteristic features of this artistic circle are the Deeisis with Christ King of Kings and the Warrior-Saints, the mirror composition of Theodore Tyron and Theodore Stratelates, the attention to detail, the emotional representation of the figures’ gestures, the realistic elements and the attempt at using perspective, the bright colors. 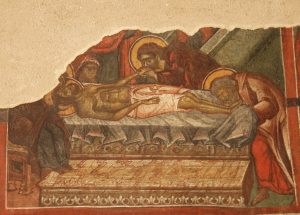 Threnos, the monastery of Kremikovtsi 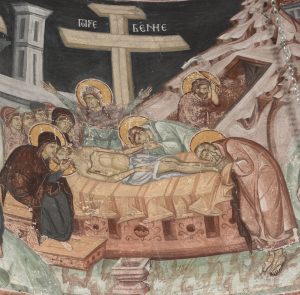 The chief icon-painter who worked in the altar and in the lower registers of the naos of the church in Kremikovtsi, has executed part of the frescoes in the Church of St. Petka in Braichino Village (Macedonia, end of 15th c.). A similar handwriting we can see in part of the frescoes in the church of the Poganovo Monastery (1499). The fragments from the end of the 15th c. in the St. Nicholas Church of the Archontessa Theologina in Kastoria (end of 15th c.) are the closest parallel of the frescoes, created by the second icon-painter, who worked in the upper registers in the naos of the Kremikovtsi Monastery church. Most of the paintings in the Kremikovtsi narthex correspond to the 1496 murals in Panagia Koubelidiki, also in Kastoria. 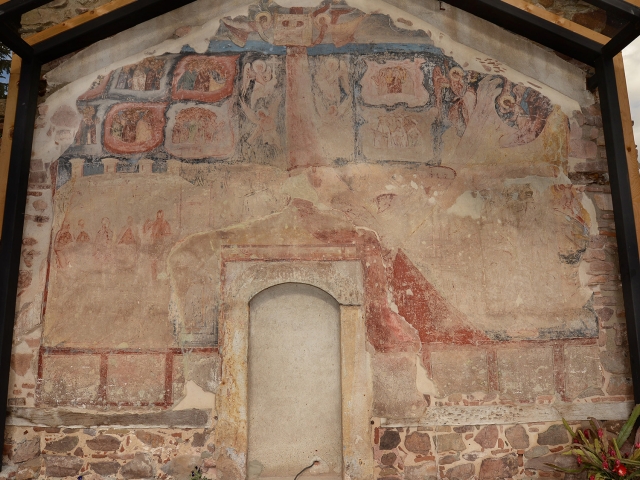 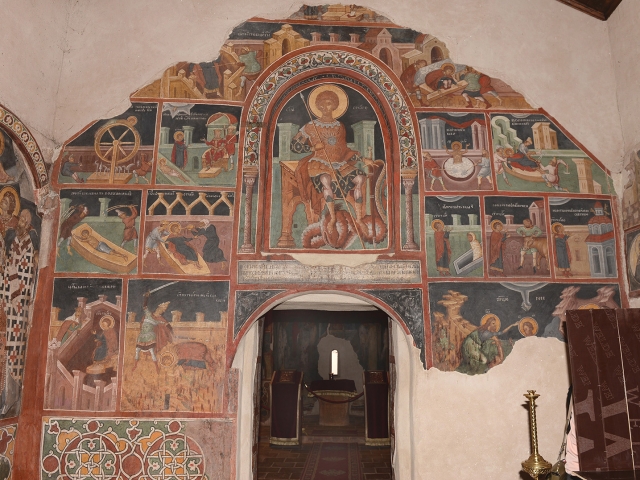 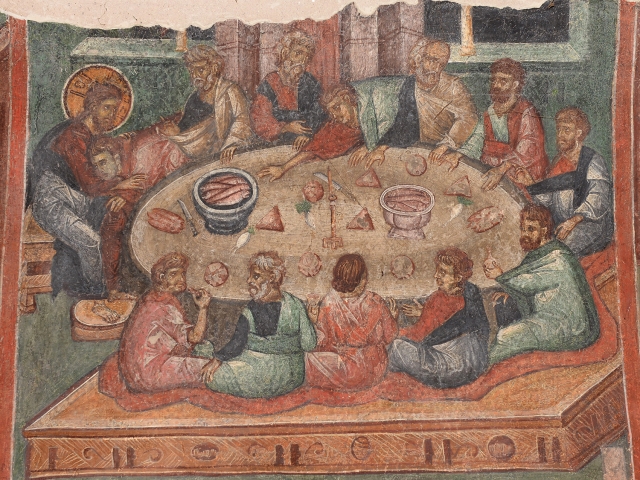 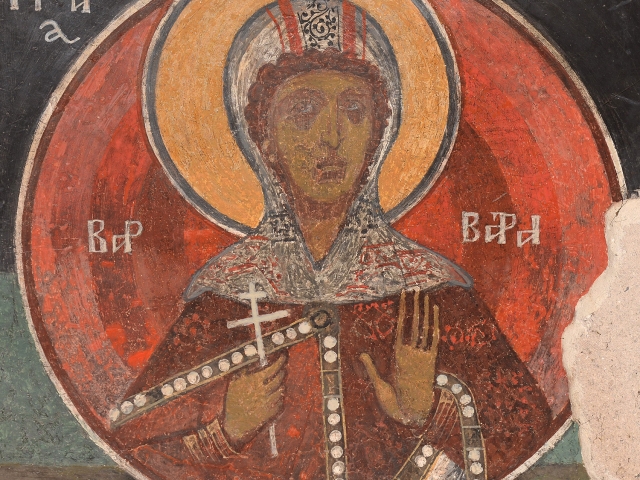 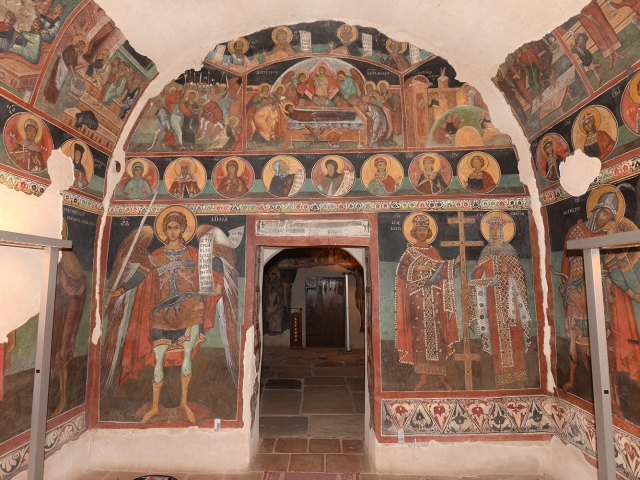