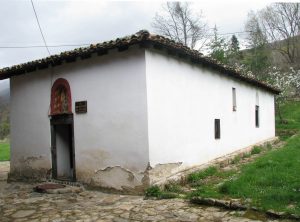 The church of St. Petka in Brajcino, view from the southwest

The monastery church of St. Petka is located at about 2 km to the East of the village of Brajcino, Resen Municipality in the Republic of Macedonia. The village is situated on the eastern bank of the Prespa Lake, not far from the border with Greece. The monastery is not active.

The date on the donor’s inscription on the western wall of the naos is destroyed but it witnesses that the church was erected and decorated at the same time and therefore the building of the church could be referred to the period of the initial decoration at the end of the 15th c. According to Viktorija Popovska-Korobar the frescoes are created between 1486 and 1493, that is at the same time when the St. Nicholas Church of Nun Eupraxia in Kastoria and the Monastery of Kremikovtsi were decorated.

The donor of St. Petka in Brajcino was a hieromonk, whose name is lost in the donor’s inscription. An inscription near the Deesis on the western facade however mentions a monk named Pachomius.

Around the 17th c. the earliest, for unknown reasons, the southern wall of the church was demolished entirely and the northern – partially. The temple was rebuilt and a narthex was added at the end of the 18th c. or in 1800 – the date of the dedicatory inscription of Nikola in the patron niche. Today parts of the iconostasis dated from the second half of the 16th c. and icons form 1857 are exhibited in the narthex.

St. Petka in Brajcino is a small (internal size of the naos 5 х 3.5 m) single-nave undomed church. The 15th-century building features an internally asymmetrical apse, a prosthesis niche and a diakonikon on the eastern wall, and is illuminated through a single window on the southern wall. During the second construction stage, about 1800, beside the reconstruction of the naos the building was expanded with 45 cm to the south. A square narthex was added with internal size of 4.2 x 4.1 m. The entrance is from the west. 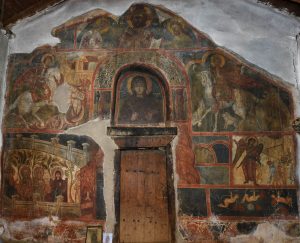 The eastern wall of the narthex of the church of St. Petka in Brajcino

The church frescoes come from two periods. The 15th c. images occupy the eastern and the western walls of the naos, as well as the western facade of the original church, which is today the eastern wall of the narthex, where there are no other frescoes. During the restoration works of 1973-1974 fragments of the early murals were discovered on the southern facade too.

The monumental painting from 1800 partially covers the southern and northern walls of the naos and includes another couple of images in the southern part of the eastern and the western walls.

Frescoes from the end of the 15th c.

The composition of Christ’s Ascension is presented in the highest register of the eastern wall; underneath the scene of Annunciation and the images of Simeon the Stylite and Daniel the Stylite flank the apse. The apse presents the Theotokos and Child and Officiating Church Fathers with the figures of St. John Chrysostom, St. Basil the Great and two angels with ripidia. St. Stephen is depicted in the prosthesis niche and St. Romanus the Melodist in the diakonikon.

The upper registers on the western wall are occupied by the compositions of Transfiguration and Dormition of the Theotokos, flanked by the standing figures of St. John of Damascus and St. Cosmas of Maiuma. Beneath them are medallions with half-length figures of St. Catherine (to the North) and of St. Euthymius (to the South). On both sides of the entrance in the lower register there are depictions of Archangel Michel and St. Constantine and St. Helena.

On the highest belt of the western facade there is a fresco of Deesis. Traditionally in the central part of the wall there is a patron’s niche with the image of St. Petka. Flanking the niche are the images of saints George (to the North) and Menas (to the South) on horseback as vanquishers of evil. The anthropomorphic image of the dragon being pierced by St. George and the three white grinning animals that St. Menas leads on a leash are of particular interest.

The lower half of the facade features the composition of the Last Judgement and to the north of the entrance we can see the Garden of Eden and part of a figure of a praying monk. In all probability this is the monk Pachomius, mentioned in the inscription in front of the hand of Theotokos from the Deesis composition. The River of Fire, the Sinners in hell and the Angel weighing souls are depicted to the south of the door.

In the western part of the southern facade of the original church, now covered with a later coat of plaster, there used to be a portrait of which only fragments of two male figures survived – one in a monk’s habit.

The frescoes in St. Petka Church in Brajcino are representative of the monuments of the artistic circle of Kastoria of the 1480-90s like the frescoes of the Dormition Monastery of Treskavec (1483) and St. Nicetas near the village of Cucer (Baniani, 1483) in the Republic of Macedonia, St. Nicholas Church of Nun Eupraxia (1486) and Panagia Koubelidiki (1495/1496) in Kastoria, and the Poganovo Monastery (1499) in Serbia.

The murals in Brajcino were created by two icon-painters. The first, much more skilled, decorated the eastern wall of the naos and the western facade. The same master was the leading icon-painter in the church of the Kremikovtsi Monastery (1493). This is clearly visible in the comparison of the ornaments and especially of the images of the Virgin in the apses of the two churches. 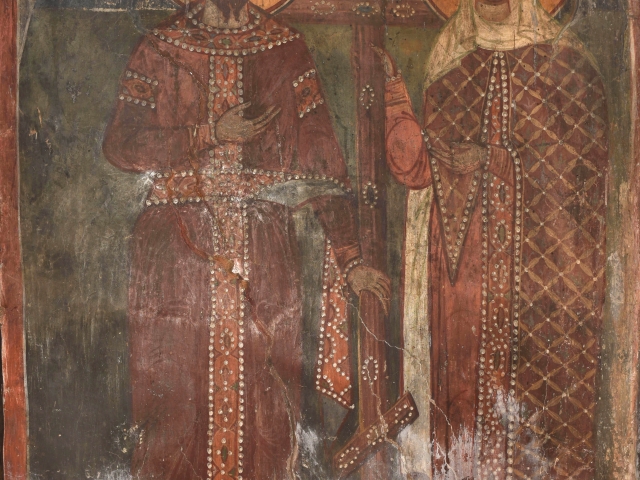 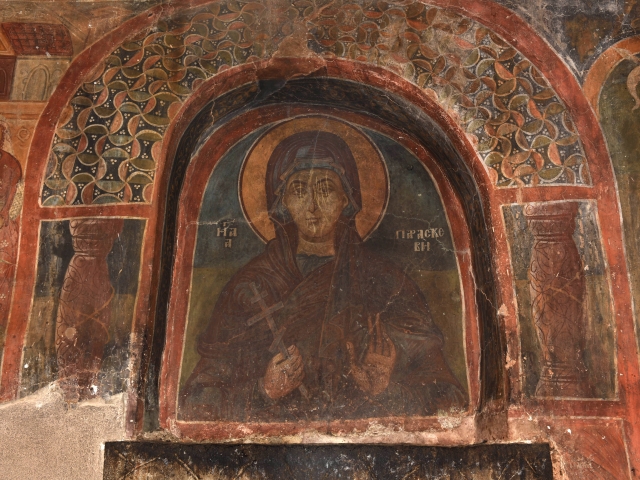 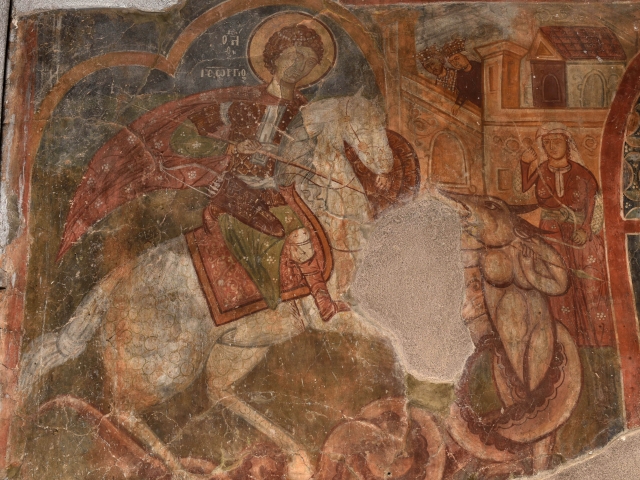 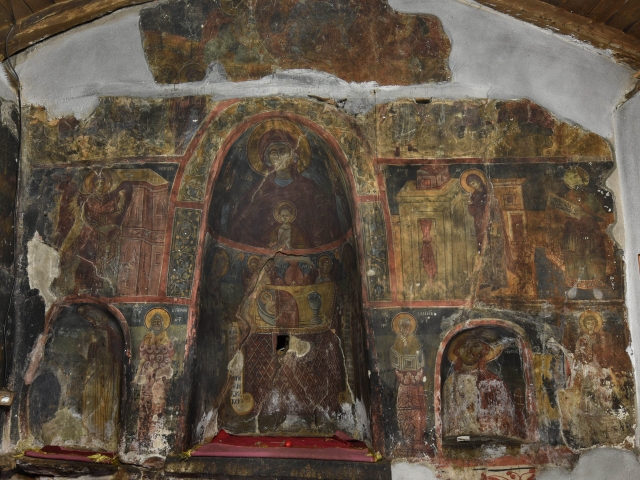 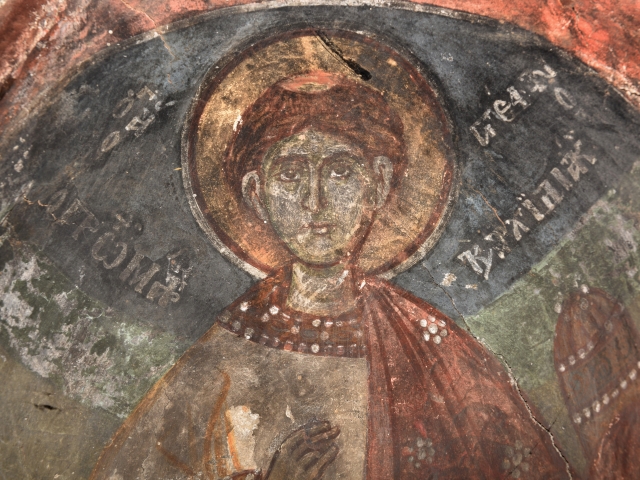 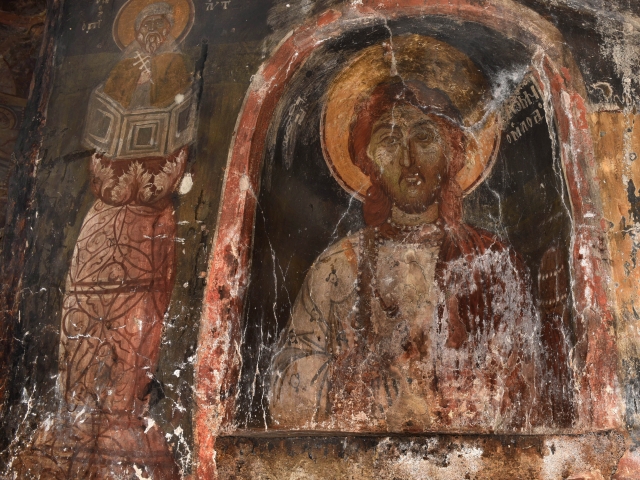 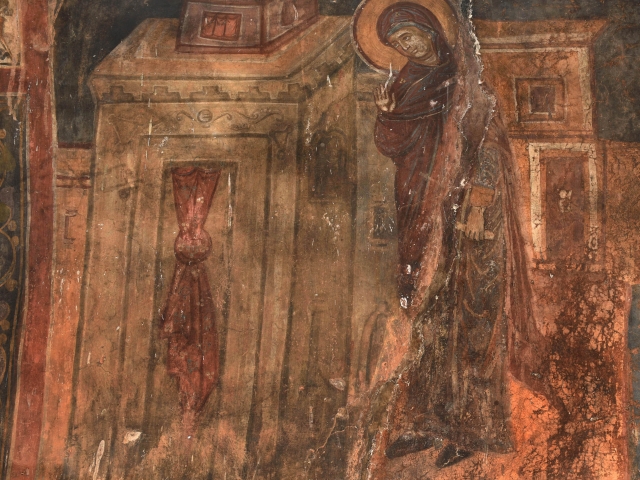 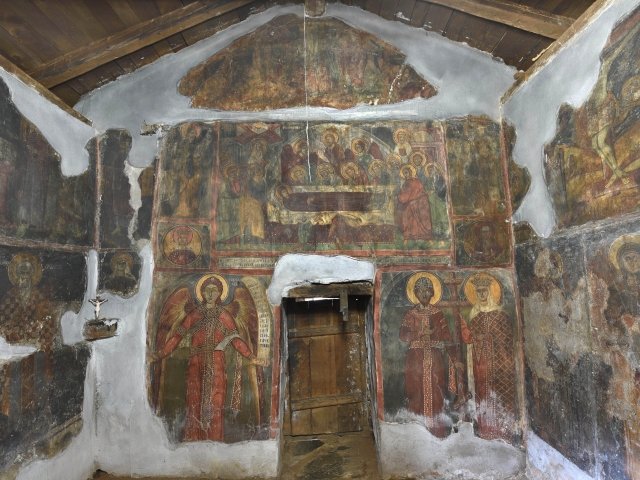 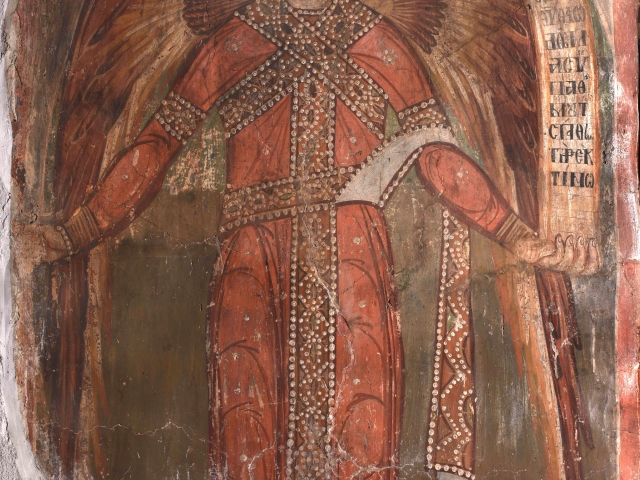