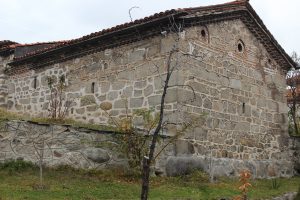 The village is located on the southern slopes of Rila Mountain, some 19 km from the town of Razlog. The church is situated in the center of the village. Today it is a branch of the National Museum of History. You can find information about the working hours of the church at http://www.historymuseum.org/bg/filial/.

There is certain evidence of the existence of the village back before the Balkans were conquered by the Ottomans. Under Turkish rule the villagers were engaged in sheep-breeding and trade. In the early 17th c., they built a church which was painted in 1614, as stated in the donor’s inscriptions. The funds were raised by a couple of prominent families in the village. Special merits for the building and its decoration had the donor Hasia. In a separate inscription he pointed out that he’d decided to build the church after a pilgrimage to the Church of the Holy Sepulcher in Jerusalem. 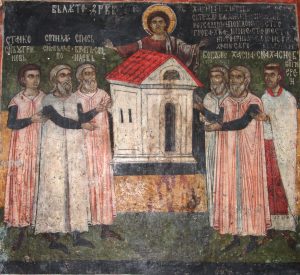 The donor’s composition on the western wall of the nave

The church doesn’t belong to the simplified architectural type characteristic of the period and though humble in size it follows the complex plan of a three-nave pseudobasilica. It is built of well-worked stone and mortar. The altar apse is inscribed in the width of the eastern wall. From the east the façade is divided by three round windows, marking the internal segmentation of the temple in naves. The attention to the construction work is visible in the two rows of decorative cornice (wolf tooth) in the upper zone of the walls and in the brick zones underneath, which turn into cell type construction on the eastern and the southern facades.

A couple of steep steps lead to the church’s interior. The three naves of the naos, each of them covered by a barrel vault, are divided by four pillars, connected with arcades. The arcades continue in the altar space, dividing it into three rooms: altar, prosthesis and diaconicon. The prothesis and the diaconicon are provided with small niches. The altar screen is built of bricks and the transition from the naos to the altar and the prosthesis is made through pointed arches. On the walls of the naos and on the western façade there are a couple of shallow arched niches.

Segmented in this way, the space of the naos accommodates a significant number of images, much more than the usual parish church of the epoch. 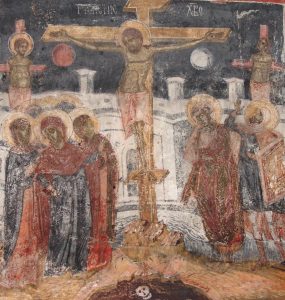 The Crucifixion of Christ 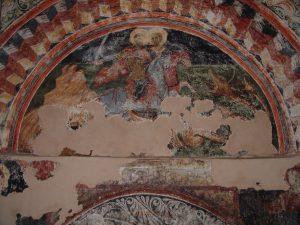 The frescoes occupy the entire space of the naos and the one-time façade (today eastern wall of the narthex added in the early 20th c.).

In the concha of the altar apse is depicted Theotokos Wider than Heaven and underneath the Adoration of the Sacrifice completed by other images of hierarchs, situated in the concha’s front part. On the southern and the northern walls in the altar are depicted the Divine Liturgy and underneath some rare images of deacons. In the prosthesis, in its usual place on the northern wall there is the Vision of St. Peter of Alexandria and in the niche – Archdeacon Stephen. Next to it there is a mural diptych. In the niche of the diaconicon a cross is depicted and next to stands the image of St. Cyril with the epithet the Philosopher.

In the spaces of the prothesis and the diaconicon in both the lower and the upper registers there are the figures of the Fathers of the Church in full length. Their images occupy most of the vaults of the southern and the northern naves of the naos.

In the zenith of the central vault are depicted the different hypostases of Christ: Pantocrator, Emmanuel and Angel of the Great Council. A medallion with the Theotokos Oranta is situated in the western part of the vault near the Dormition of the Theotokos. From the south and from the north they are surrounded by a register of prophets.

The scenes of the Great Feasts are displayed in the central nave and are mixed with compositions from the cycle of the Passion of Christ. The latter continues also in the southern part of the temple. A couple of scenes of the Miracles and Deeds of Christ complete the Christological cycle in the northern nave.

In the lowest register, occupied by full-length figures of saints, the southern nave features venerable monks and the northern – warrior saints.

The arches divide the western wall in three parts: the southern nave is intended for the donor’s portrait and for images connected with the donors’ contributions and their prayer for mercy on the Day of the Last Judgement (Sacrifice of Abraham, Archangel Michael). In the northern nave are depicted St. Constantine and St. Helena and above them, the Vision of St. Eusthatios Placida. In the center of the western wall under the Dormition of the Theotokos and the donor’s inscription the entrance is flanked by St. Cyricus and St. Julita and St. Zosimas and St. Mary of Egypt. The ascetic theme is emphasized by the images of monks, including those of the especially revered regional saints John of Rila, Prohor of Pčinja and Joachim of Sarandapor. On the western façade of the church in three shallow arched niches there are the images of St. George, the patrons of the temple – the two Theodores and St. Demetrius, on horseback, defeating different enemies. The entrance is flanked by the images of the Theotokos, Christ and St. John the Baptist in a Deeisis composition, representing an abridged version of the idea of the Last Judgement. Still visible are the images of St. Petka, St. Pachomius and the Angel and two healer saints.

The inscriptions in the temple are Cyrillic except for a couple of scrolls which are written in Greek. The inscriptions manifest common paleographic and linguistic features with those in the naos of the churches in Slimnitsa and Seslavtsi which leads to the conclusion that the writers/icon-painters were part of one team.

The closest iconographic and style parallel of the Dobarsko frescoes are the murals in the church of the Seslavtsi Monastery (1616). The studies carried out under the project “Routes of the Balkan Icon-Painters” revealed thematic, style and epigraphic similarities of these two Bulgarian monuments with the Dormition Church in the Albanian village of Zervat. Some of the frescoes in the Dormition Church are made by the icon-painter that worked on the decoration of the churches of Dobarsko and Seslavtsi. The original iconostasis is still in its place in the Dobarsko church with its despotic icons and the Royal doors. The icons of the Deisis row stand above and the Crucifixion surmounts the iconostasis. In the folds of the robe on the icon of Christ there is an inscription of the name Ilia, which some researchers (Atanas Bozhkov, Elena Floreva, V. Popovska-Korobar) interpret as the signature of one of the icon-painters who worked in the church in 1614. In Bulgarian literature the frescoes are ascribed to the atelier of St. Pimen of Zograph. 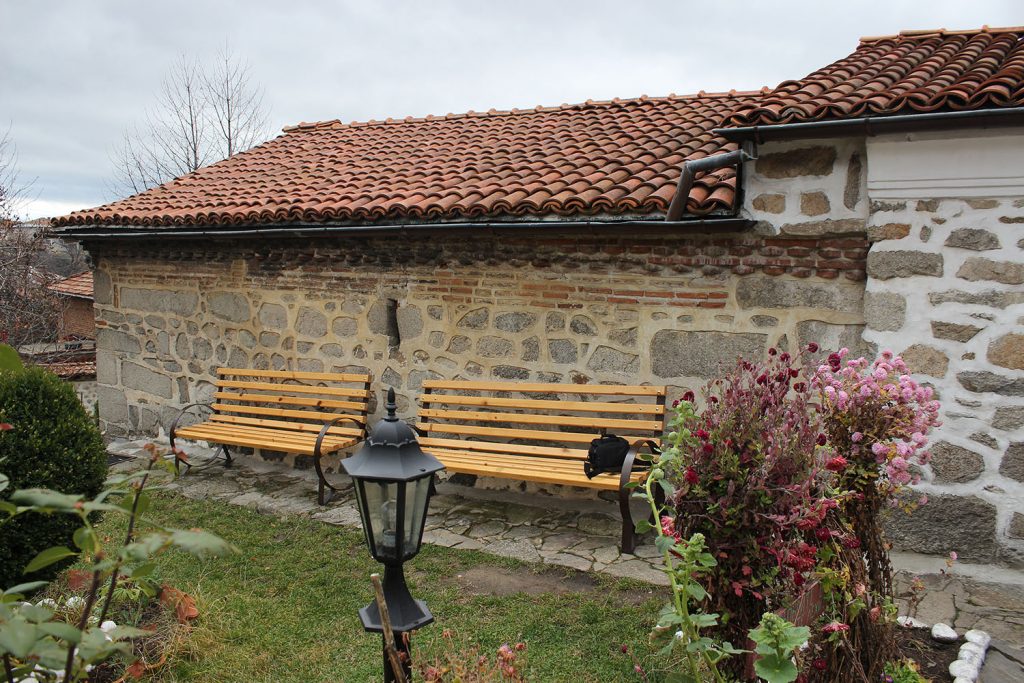 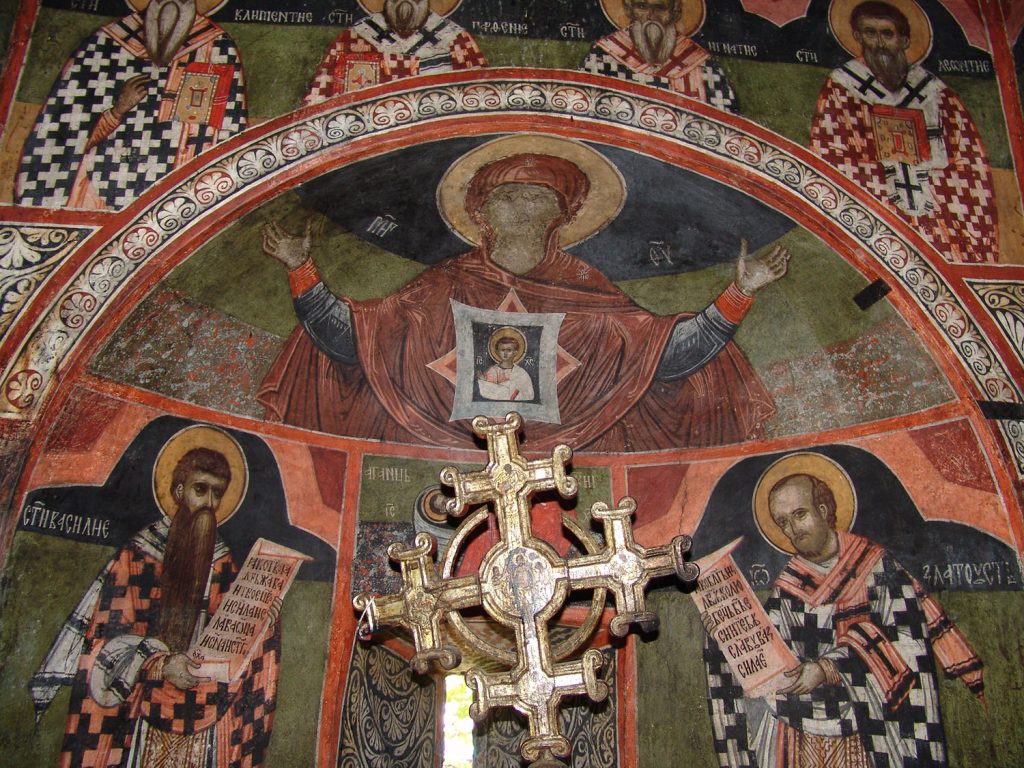 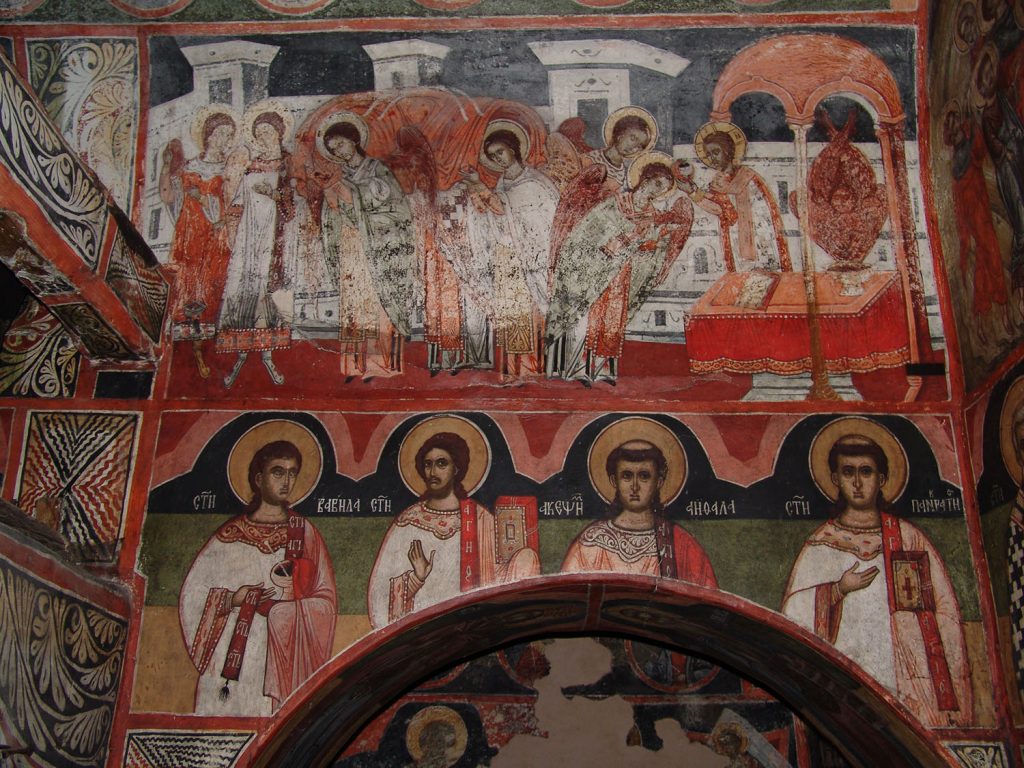 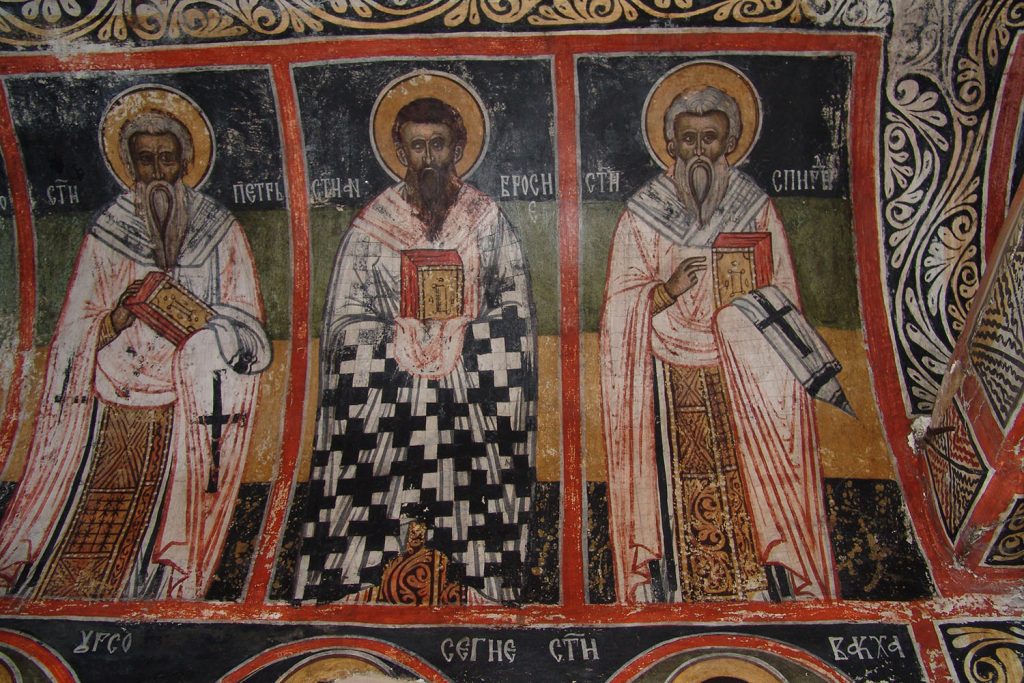 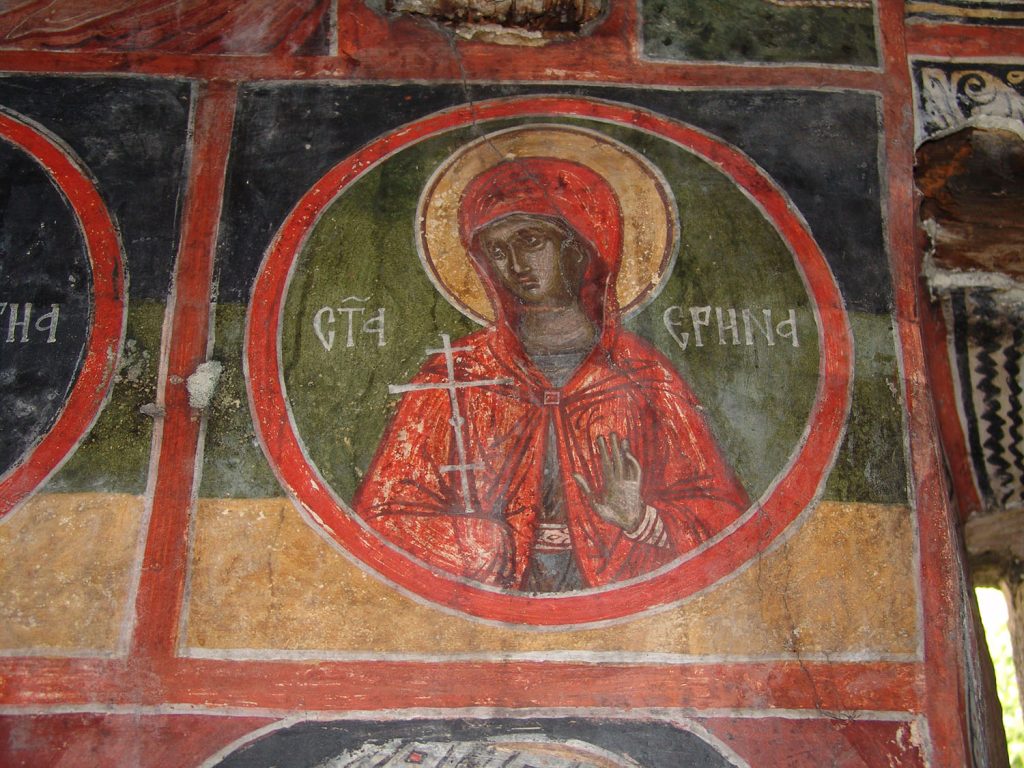 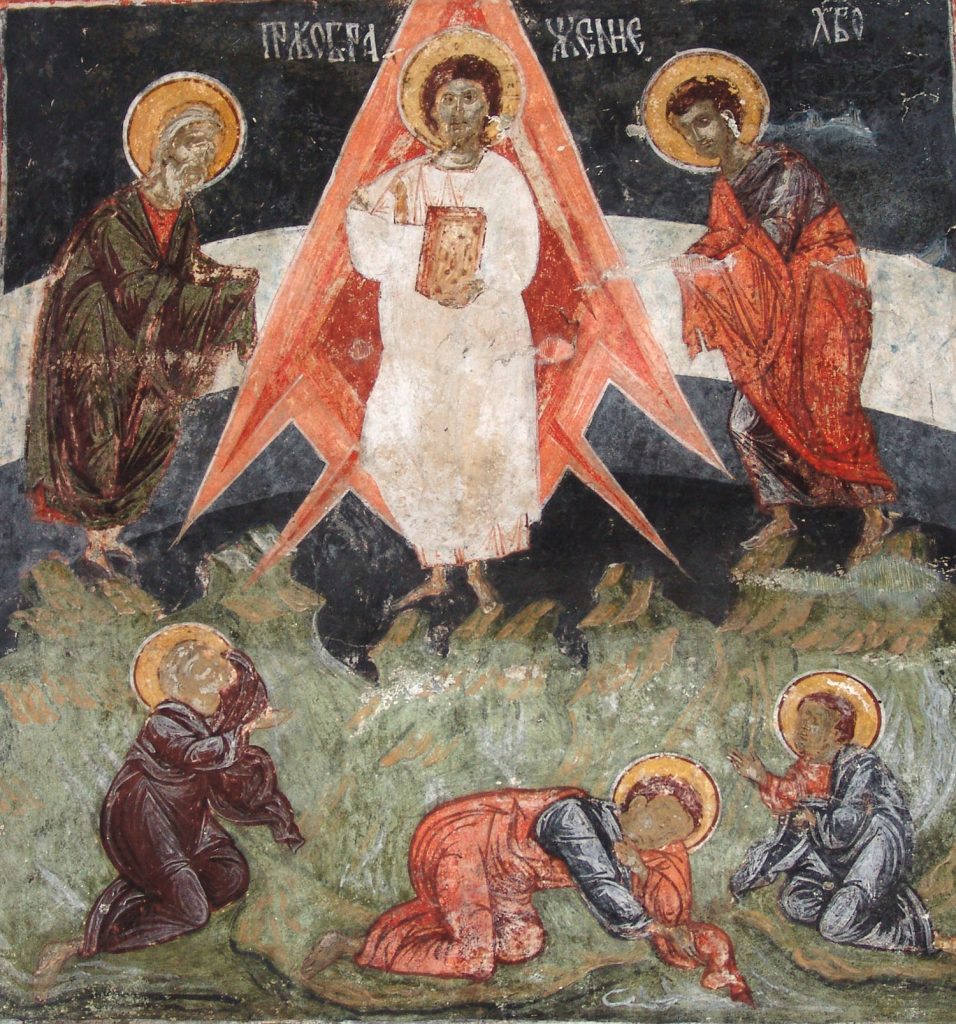 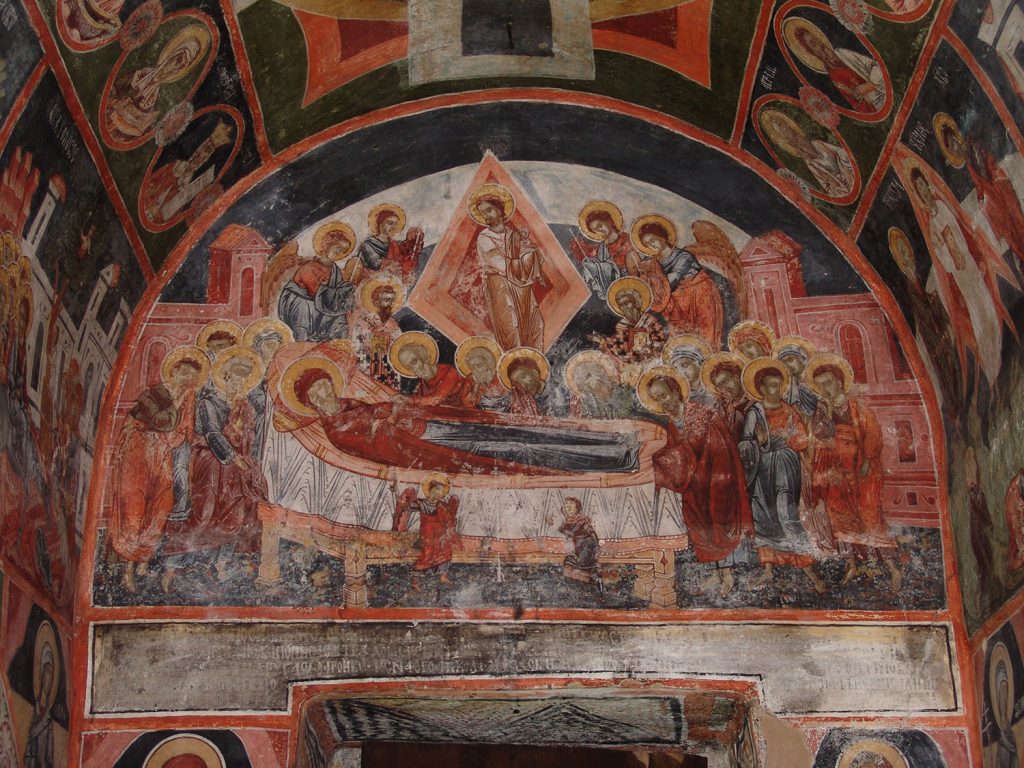 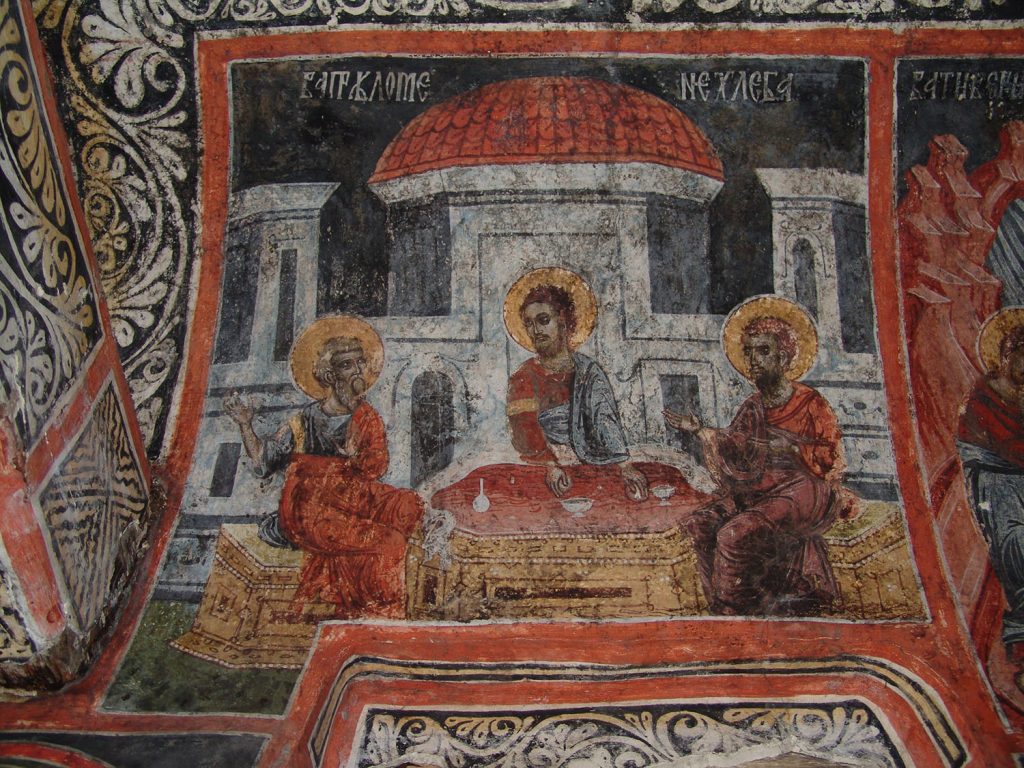