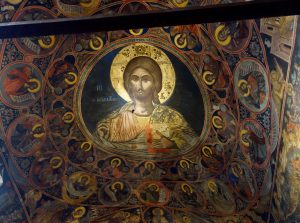 Monastery of St. Nicholas of the Philanthropinon, Ioannina – naos (1542)

Among the most prominent and talented representatives of the zenith of the Balkan art in the 16th c., along with the Cretan icon-painters, we must point out at the masters of the so-called School of Epirus. There are several factors that predetermine the appearance of these icon-painters in the central Greek lands in the first quarter of the sixteenth century. The most important is the prosperity of the Ottoman Empire under Suleiman the Magnificent (1520-1566). Under his rule the big cities in the Greek lands prospered thanks to the privileges they were bestowed upon. The Ecumenical Patriarchate succeeded in benefiting from the closeness to the sultan and some of its high-ranking representatives built and maintained the big and influential monastic centers under its jurisdiction in Mount Athos and Meteora. The erection of many churches and monasteries in Ioannina and its vicinity is also related with the high-ranking clergymen, who came from prominent families. Being the supreme religious institution, the church became the vehicle of a high culture. A culture represented not only by the well-read donors but also by the icon-painters who painted the frescoes in these religious centers. Initially the great Greek scholar Manolis Chadzidakis called these icon-painters masters from the ‘School of Thebes’, because they signed as coming from Thebes in Boeotia. Later Mirtali Acheimastou-Potamianou suggested the term ‘School of Epirus’ because of the concentration of their works in the territory of Epirus. In the art studies they are usually called masters from the School of Northeast Greece. We are talking about several icon-painters, some known for signing their works, others still anonymous. The leading master of the school is considered to be Frangos Katelanos but save for his signature, denoting he came from Thebes, we have no other information about his identity. In the 18th c. Dionysius of Furna in his famous Hermeneia on icon-painting art expressed his admiration for the mastery of Katelanos and set his skill in the color as a model to be followed. 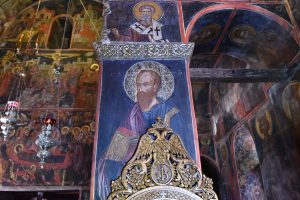 The brothers priest Georgios and Frangos Kondaris signed repeatedly their works and hence we know that Georgios (probably the older brother) was a priest and ecclesiarch of Thebes and Boeotia, and a couple of years later he signed as sakellarios of Thebes, that is, besides being an icon-painter, he occupied a high position at the town’s bishopric. In the late Middle Ages Thebes was among the biggest cities in the Balkans, maintaining active trade connections with Western Europe. In the end of the 19th and the early 20th c. the town’s historical heritage was almost entirely destroyed by earthquakes. Today the remains of some fifteen temples are uncovered in the town and its surroundings. Some of them preserve traces of painting. According to H. Kilakou the murals can be ascribed to the atelier of Georgios and Frangos Kondaris, if not to the masters themselves. No earlier monuments have been discovered, dating from the time before the first appearance of the school’s representatives, i.e. from the early 16th c., which makes the research more complicated, thus leaving the question of school’s origin and formation obscure.

The art of these masters is primarily based on the Palaeologean tradition. Many of the iconographic models they used are inherited from the painting of the 14th c. in monuments such as the monasteries Gračanica and Dečani in Kosovo, St. Nicetas Church in Čučer, near Skopje, St. Nicholas Orphanos in Thessaloniki. There also was a strong influence on behalf of the icons of the Cretan masters of the 15th-16th cc. The masters from the School of Epirus also knew the works of those Cretan masters who worked in continental Greece from the 1530s onward. Their main representative was the famous Theophanes Batas, called the Cretan. The mural ensembles created by the Cretan icon-painters and especially by Theophanes on Mount Athos affected the representatives of the School of Epirus in different ways. While in the work of Frangos Katelanos there is a clear tendency to step away from the models used by the Cretan, the Kondaris brothers tend to adopt the models to a significant degree. This is especially visible in their later murals (St. Nicholas Galataki). The western borrowings in the works of the Epirus School painters are limited and indirect: the influence comes mainly through Cretan icons of the 15th c. or as a result of an earlier assimilation into Byzantine art. In terms of style the figures are distinctive for their elegance and harmonious proportions, their gestures and movements are characterized by nobleness and subtlety. The modelling of the faces is soft and plastic. In Katelanos’ work the softness of the contours and the limitation of the contrast between shade and light are especially well-expressed and this feature distinguishes him from both the Kondaris brothers and from the Cretan masters working on Athos. Decoratively, a distinctive feature of the Theban icon-painters are the stucco halos of the saints and the medallions on their breasts, implemented in the same technique. 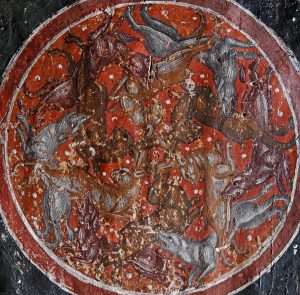 A big part of the works of the Epirus masters are found on the island of the Pamvotida Lake in Ioannina, the center of Epirus region. Best preserved, of highest quality and respectively most famous are the frescoes in the Monastery of St. Nicholas of the Philanthropinon, built and decorated with the donation of the monastery hegumen Joasaph Philantropinos, member of a prominent family coming from Constantinople but closely related to the town’s history. The donor’s inscriptions reveal that the frescoes were painted in two stages: in 1542 was decorated the naos and in 1560 – the three surrounding exonarthexes. Myrtali Acheimastou-Potamianou believes that there was another, earlier stage of decoration, probably in 1531/2; a hypothesis widely accepted but still meeting some resistance. None of the icon-painters working on the frescoes in the Philanthropinon Monastery has left their name. The murals from 1542 or at least part of them can be ascribed to Frangos Katelanos, and those of 1560 – to the two brothers priest Georgios and Frangos Kondaris. M. Potamianou suggests that the earliest frescoes in the naos are made by an unknown painter of the same school.

The other monastery on the island, restored and decorated in 1543, is St. Nicholas Ntiliou (also Strategopoulou). The author of the frescoes is anonymous but is very close to the implementation of the murals in the naos of the Philanthropinon. 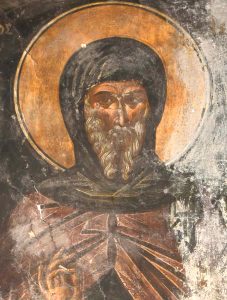 The third monastery on the island with partially preserved decoration (probably from the end of the 16th c.) is dedicated to St. Nicholas but is known as Panagia Eleousa because of the miracle-working icon venerated there. The style of the Kondaris brothers is clearly visible in the decoration. The brothers are known to have been the authors of several more frescoes in the region of Ioannina: the church of St. Demetrius in Veltsista (after 1558) and the main church of the Transfiguration monastery (1568) near the same village.

In spite of their great talent the icon-painters of the School of Epirus were rarely invited to the big monastic centers on Mount Athos and Meteora, which were dominated entirely by the Cretan icon-painting ateliers. The existing exceptions regard murals initiated by monks related to Ioannina. Undoubtedly this was the case with the donors of the Varlaam Monastery in Meteora – the monks Nectarius and Theophanes Apsaras, members of an aristocratic Ioannina family. In 1548 they commissioned the decoration of the monastery naos to Frangos Katelanos and in 1566 bishop Antonius de Vela, from the Apsaras family too, commissioned the narthex frescoes to the Kondaris brothers. On Mount Athos the only works by Epirus School masters are the murals in the chapel of St. Nicholas of the Great Lavra (1560). Nothing is known in the historic archives about the monk Cyprian who financed the decoration works. He could be identified as the monk of the same name who left his signature in a codex from the Great Lavra collection, dating from the 16th c. There he wrote that he came from Metsovo, a village near Ioannina. The frescoes in the chapel are the only signed work of Frangos Katelanos which allows scholars to ascribe him other mural decorations: in the catholicons of the monasteries Mirtia in Aetolia (1539) (some scholars believe that these murals are closer to the work of the anonymous icon-painter from the Ntiliou Monastery), and St. Nikanor (Zavorda) near Grevena (mid 16th c.), and in the church of Panagia Rassiotisa in Kastoria (1553).

Church of St. Demetrius, Veltsista – western wall of the naos

A proof of the high authority of icon-painters Georgios and Frangos Kondaris is the fact that they were hired by Ecumenical Patriarch Joasaph II, called the Magnificent, who was born in Krapsi, to the east of Ioannina. In 1563 he commissioned to the two brothers the decoration of the church of St. Nicholas in Krapsi. The atelier of the masters worked also in monasteries outside the region of Ioannina – in the catholicon of St. Nicholas Galataki on the island of Euboea (1586), in the narthex of the monastery of St. Meletius in Kiteronas, Boeotia (end of 16th c.), in St. George in Malesina, Phthiotis (end of 16th c.).

At the end of the 16th century and throughout the 17th c. the art created by the school representatives served as a model to many of the icon-painters working in the territory of Epirus (for example part of the Linotopi painters), including the part of the region which is in the territory of today’s Albania. Their influence spread to Central Greece (some monuments in Agia, Thessaly) and to Peloponnesus (the icon-painters from the Kakavas family). Their models prevail in the repertoire of some of the icon-painters working in the Bulgarian lands, for example in the church of Strupets, in Priboy, in some of the Arbanassi churches with paintings from the mid-17th c.