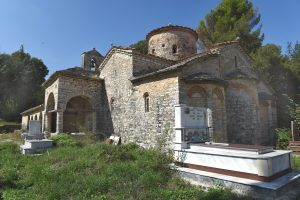 Dormition Church in Zervat, view to the south-east

The village is in southern Albania, near the town of Gjirokaster, 7 km from the Greek border. The few residents are ethnic Greek. The village is situated at the foot of Drino Mountain together with several villages with prevailing Greek population. Today the church is in the yard of the Zervat cemetery. You can visit the website of the village on http://www.zervati.gr/.

The final phase of the church construction should be dated according to the plate incorporated in the western facade – 1582/3. The donor’s inscription on the western wall of the naos reads that the painting was made in 1605/6 with the funds of all the villagers. The frescoes are made by the icon-painters who signed their names at the end of the donor’s inscriptions: Michael and Nicholas. Later the murals have been painted over, in most cases only partially. The distribution of the images and the iconography of the scenes have been preserved. 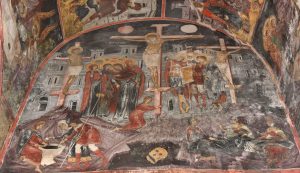 Originally the church was a cross-in-square building. At a later stage two naves to the south and to the north were added. In this way the church was transformed into a three-nave pseudo-basilica with a transverse nave (eastern transept), a dome and three pronounced apses to the east. Later a narthex was added to the west, as well as a belfry and a gallery, circling the southern facade. The north entrance is also provided with a small gallery. 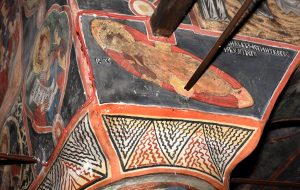 The dome is dominated by the image of Christ Pantocrator. The drum below it is divided into two registers featuring the Divine Liturgy and half-length figures of saints. In the pendatives can be seen the four Evangelists and the Holy Mandylion (east).

Part of an image of Holy Forty Martyrs in the altar

In the central altar apse there is a depiction of Theotokos Wider than Heaven with the images of two hymn-writers in the front part of the concha and officiating fathers of the church in the lowest register. In the prothesis concha there is an image of Christ the High Priest and below it the Officiating Church Fathers. The concha of the diaconicon is occupied by Christ Emmanuel. Scenes from the Old Testament, typological images of the Eucharist, stand in the fronts of the two conchae. In the three altar spaces there are numerous images of bishops and of two deacons. The vaults are occupied by scenes from the cycles of the Great Feasts, the Post-Resurrection Appearances of Christ, the Acts and Miracles of Christ. Along the whole altar in the middle register are depicted the images of the Forty Martyrs of Sebastia.

The scenes of the Great Feasts and the Post-Resurrection Appearances of Christ in the naos don’t form a single entity but are scattered in different places in the transverse, middle and the southern nave. The northern and the southern cross arms are dedicated almost entirely to the Passion of Christ, and the northern nave is occupied by martyrdoms of saints and episodes of the Passions cycle. The program of the church features numerous scenes of Christ’s miracles. Outstanding for their great dimensions are the following compositions: Crucifixion, Dormition of the Theotokos, the Sources of Wisdom of St. John Chrysostom, the Temptation in the Desert, and the Calling of Matthew for Apostle (Acts I, 21-26). The lower registers of the naos are occupied by full-length figures of saints (monks, ascetics, healers, warriors, St. Constantine and St. Helena, equal to the apostles) and saints in medallions above them (the seven Maccabees, monks and martyrs). In the width of the arches supporting the vaults there are full-length figures of apostles and in the vaults’ zenith – numerous half-length figures of prophets. In the zenith of the northern nave from east to west there are medallions with the images of God Sabaoth (?), Christ the High Priest, Christ Angel of the Great Council, The Mother of God, St. John the Baptist, and Prophet Elijah (?).

The paintings in the narthex don’t cover all the surfaces. In the vault there is a depiction of Theotokos and Child in a medallion, surrounded by figures of prophets (the prophets predicted from the above). The image is surrounded by scenes from the Akathist. The Last Judgment occupies the whole eastern wall. At the two sides of the entrance to the naos there are little fresco-icons of Christ and the Theotokos. The images of St. Nicholas and St. George killing the Dragon are significantly bigger. In a niche on the southern wall of the narthex there is a depiction of Christ in the Tomb.

The icons, that until recently stood on the church iconostasis, have been stolen. On the two altar columns, under the scene of the Annunciation, there are two fresco-icons of John the Baptist and Dormition of the Theotokos. 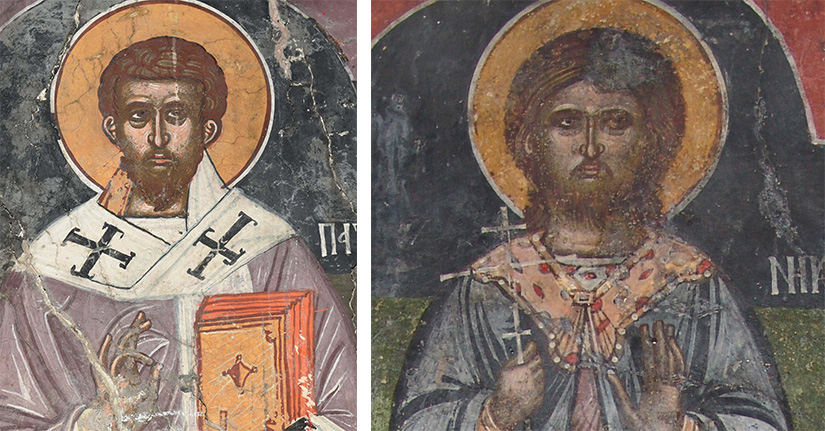 The inscriptions are Greek. Small share of the images in the eastern part of the church are signed with Cyrillic inscriptions. 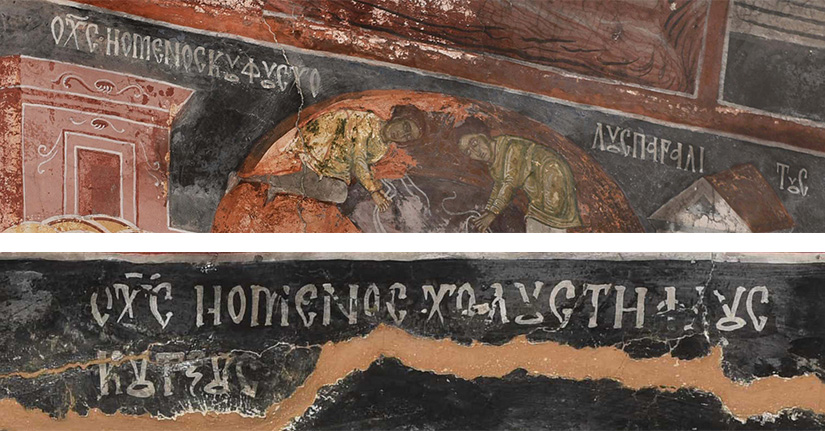 Two leading icon-painters have worked in the naos. The first has made the paintings in the altar, the transverse nave and the eastern part of the central nave and the second has painted the western part of the central and the two side naves, as well as the frescoes in the narthex. In all probability the painting decoration in the naos was made in two stages with a certain pause between them, but still within 1605/6. So far the hands of the icon-painters and the zones in the church decorated by each of them haven’t been distinguished. Nevertheless, the prevailing opinion in the Greek literature is that the murals were made by master Michael from Linotopi.

The personality of the second icon-painter Nicholas is never commented except for the attempt of ascribing to him some of the icons of the iconostasis. At the present stage of research we believe that Michael from Linotopi might have participated as an assistant of the chief painter who worked in the western part of the naos and in the narthex. The chief icon-painter in the eastern half of the naos on the other hand can be connected with two mural ensembles in Bulgarian lands: the church of St. Thodore Tyron and Theodore Stratelates in Dobasrsko and the church of the Monastery of Seslavtsi. He is likely to have worked in both the temples. His work shows some similarities with the work of one of the authors of the frescoes in the Slimnitsa Monastery naos. 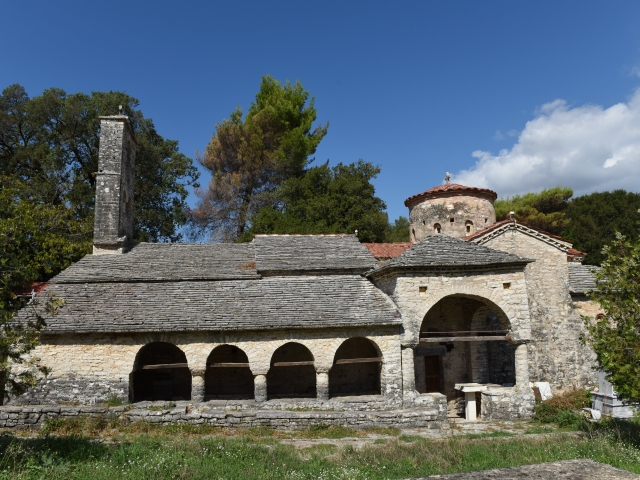 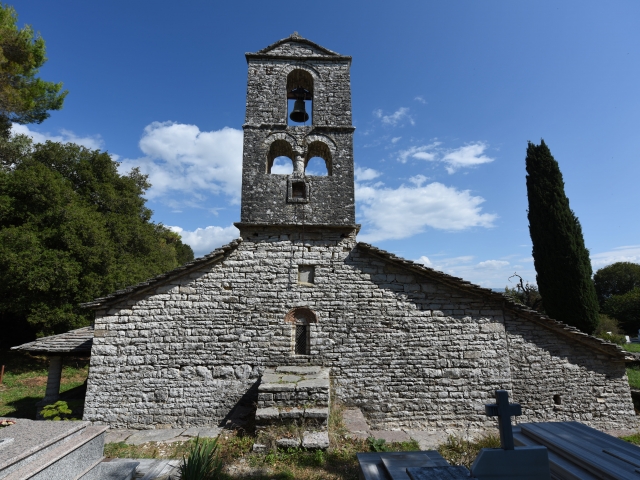 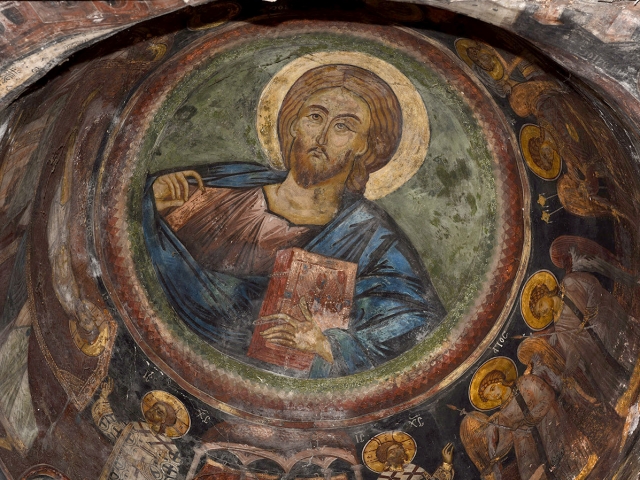 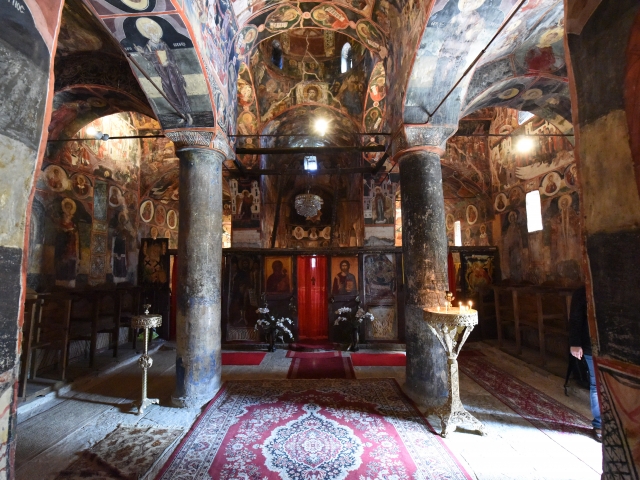 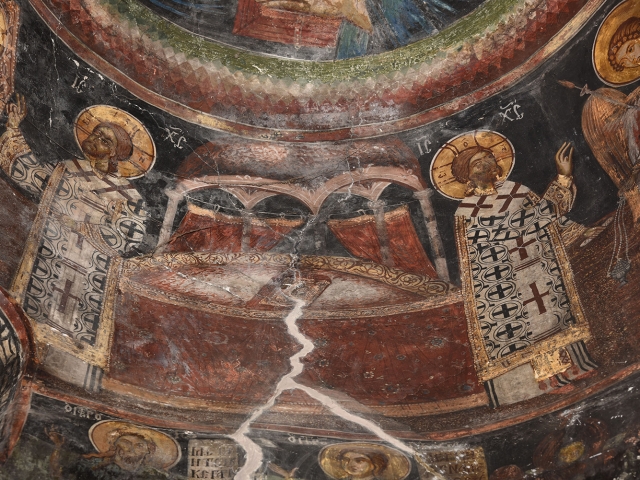 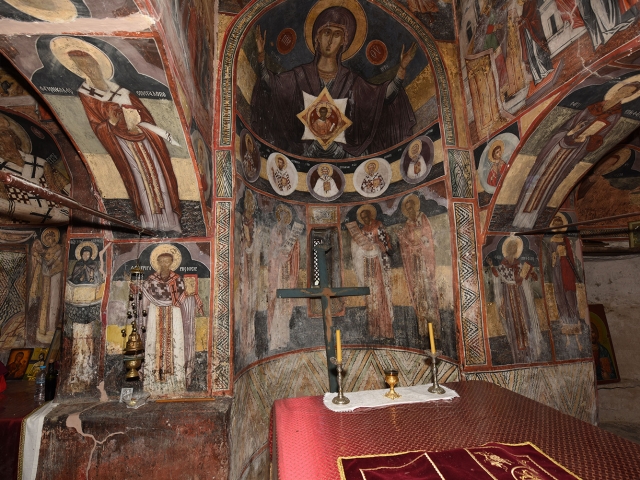 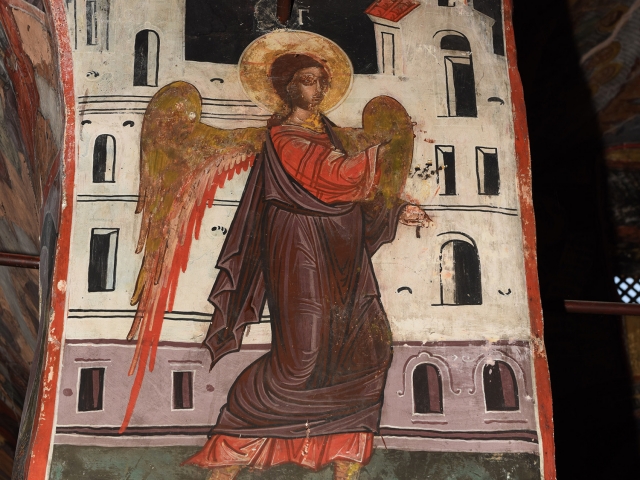 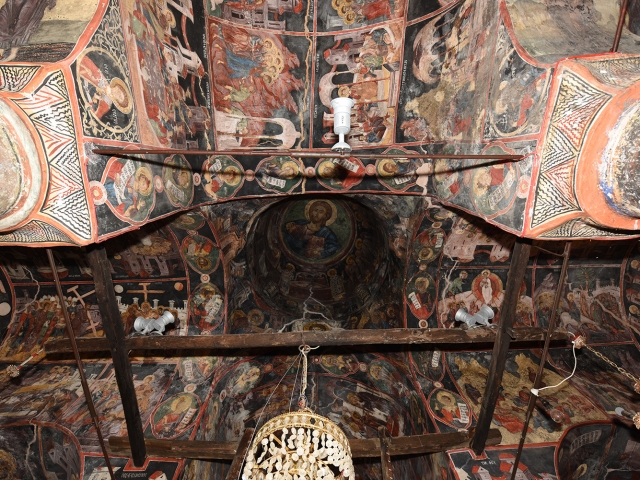 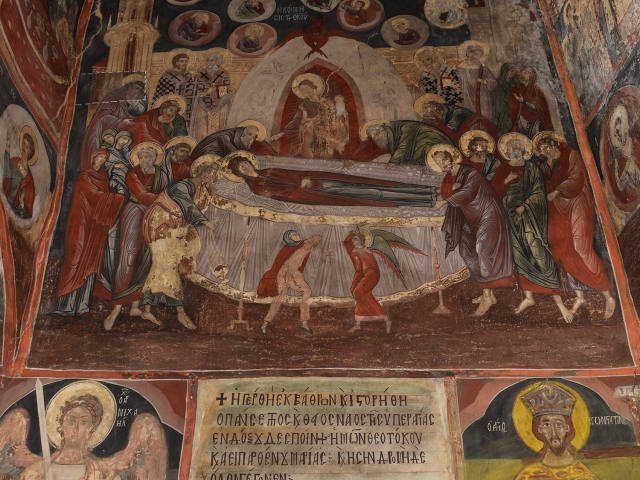 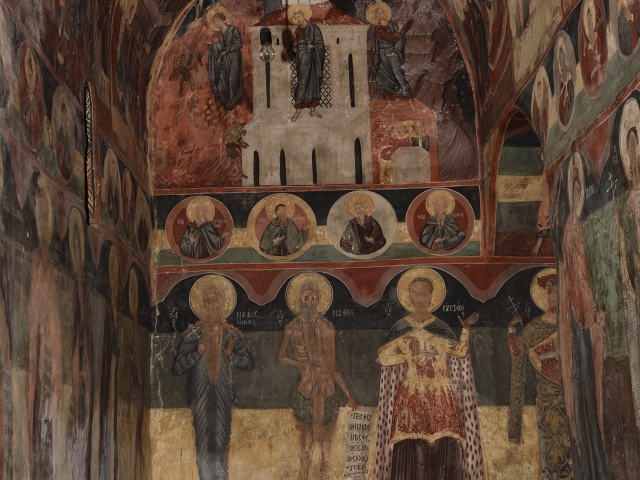 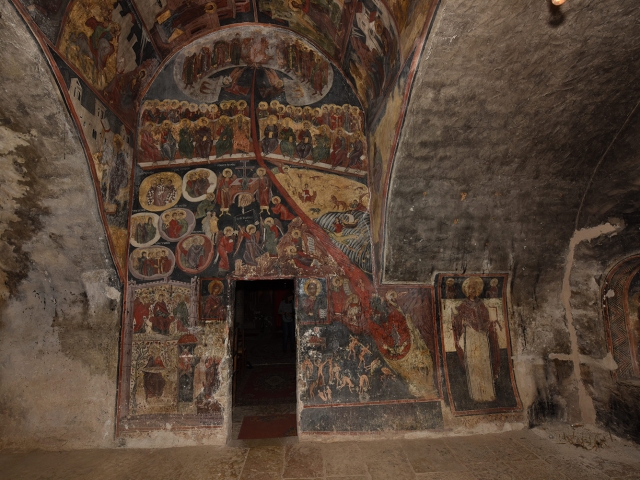 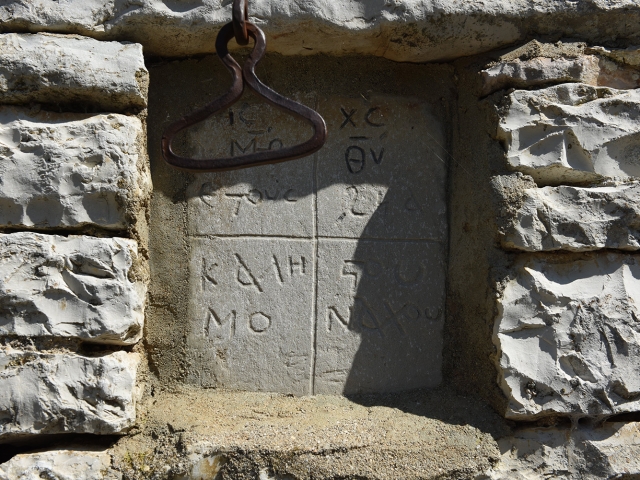