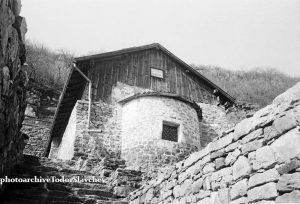 The eastern façade before the restoration from the end of the 1960s, photo archive of Todor Slavtchev

The Church of St. George is situated on the right bank of the river Yantra in Veliko Tarnovo, opposite to the churches St. Peter and St. Paul and Holy Forty Martyrs. The church is a branch of the Regional Museum of History – Veliko Tarnovo. It is open for visits from April to October with working hours 09.00-18.00. For additional information go to http://www.museumvt.com/.

The murals in the naos are executed in 1616 as stated by the donor’s inscription above the entrance on the western wall of the naos. It mentions the names of the main donors of the church: mister Paraskeva and his wife Irini. The painting of the church was completed under Tarnovo Metropolitan Gabriel I (1611-1626).

Due to the lack of regular archeological excavations in the church there is no way to determine whether it was built on the older foundations dating from the capital period of the town, as was the practice during the Ottoman rule. The narthex is built together with the nave but is painted entirely a couple of years later, maybe in the time when Gabriel was a bishop. The eastern wall preserves traces of the 1616 painting.

The devastating earthquake in Tarnovo in 1913 demolished the vault and almost all the southern wall of the naos. The murals in the altar, on the western and the southern walls remain intact.

The building consists of a naos and a narrow narthex. It is 14 m long and 7 m wide (after K. Mityaev). Its architectural plan is typical of the period of late Middle Ages – a small single nave and one apse church covered by a barrel vault. The not very high apse protrudes on the eastern façade and has a separate roof. There is no plastic decoration on the outer walls except for the arched niche on the southern wall above the entrance to the narthex. The church is constructed of stone and mortar. Occasionally bricks are also used. 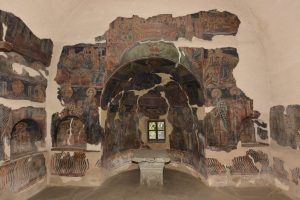 The frescoes in the sanctuary

In the apse concha is depicted the image of the Theotokos Wider than Heaven. Beneath it is the scene of the Communion of the Apostles and in the bottom – Officiating Church Fathers. In the prothesis niche besides Christ in the Grave, there is a painted diptych, relating the names of more citizens of Tarnovo who’d contributed with funds for the decoration of the church. On the eastern wall in the altar are situated the Pentecost, Old Testament scenes and scenes of Christ’s Miracles. The central composition of the Dormition of the Theotokos on the western wall is complemented by two rare episodes of the Dormition cycle. Above them there are scenes of the Passion cycle. Registers with separate images of saints occupy part of the western, the whole northern and probably the whole southern walls of the naos. They are images of warriors, women saints, monks, hermits, healers, martyrs and bishops. They are distributed in friezes (bottom-up) of full-length figures, half-length figures, medallions and again in the highest register full-length figures of bishops. Apart from the Pentecost on the eastern wall and the Dormition on the western wall no other Great Feasts scenes have survived. They had probably been painted on the collapsed dome.

Saint women on the western wall of the nave, the apostles on the empty tomb of the Virgin, Christ’s raising on the cross 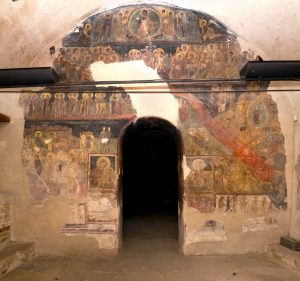 Eastern wall of the narthex

The extant murals in the narthex have been heavily damaged by the construction of the road to the village of Arbanasi which passes next to the western wall of the narthex. The entire eastern wall is occupied by the composition of the Last Judgement; in line with the same theme on the eastern part of the southern wall are depicted the full-length figures of Prophet Elijah and the Righteous Enoch. Other saints of that register which used to continue on the western and northern walls have not been preserved. In the upper zone on the southern and the western walls a couple of half-length images of saints in monastic attire still survive. The southern and probably the northern wall used to be crossed by a frieze with figures of hierarchs in full length. A rare cycle of the Creation of the World is situated on the western wall. Above it and in the vault are depicted scenes of Christ’s Miracles, the compositions Christ the True Vine, Jacob’s Ladder and a fragment of the image of Christ the Anapeson. Flanking the door to the naos are mural icons of the Theotokos with Child and Christ.

In both the naos and the narthex, the inscriptions are in Greek. They are remarkable for the relatively high level of literacy for the time.

St John Chrysostom, detail.    St Constantine the Great, detail.    Part of the group of the Seven Slavic Saints: St. Gorazd and St. Angelarius from the narthex of the Slimnica Monastery

The frescoes in the naos are implemented by two icon-painters, probably coming from Greece. We have no information about their work on other mural ensembles. Their style is relatively similar to the paintings from the narthex of the Slimnitsa Monastery (1612). In the selection and in the iconography of some rarely depicted saints the Turnovo icon-painters show similarities with several monuments of the early 17th c. in the territory of the Patriarchate of Pec (naos of Novo Hopovo, Pustinja). Some similarities, mainly in the themes, can be found with the painting of the churches in the monasteries of Kurilo, Seslavtsi, and in the Dobarsko church.

Stefanov, P.On the Greek-Bulgarian art relations in the 17th century (based on material from St. George’church in Veliko Tarnovo). – Etudes Balkaniques, 1, 1992, 86-99. 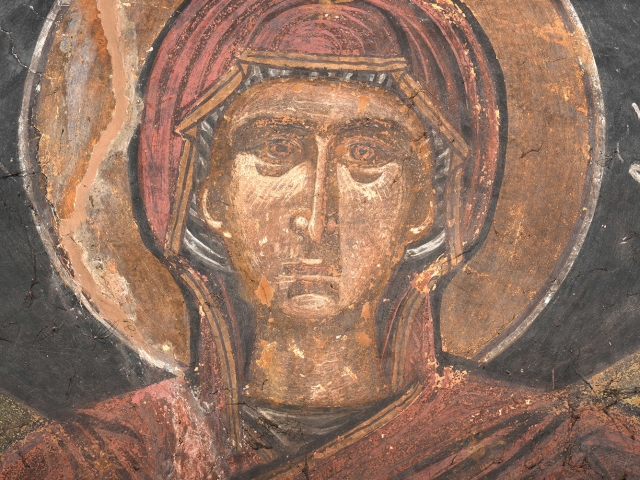 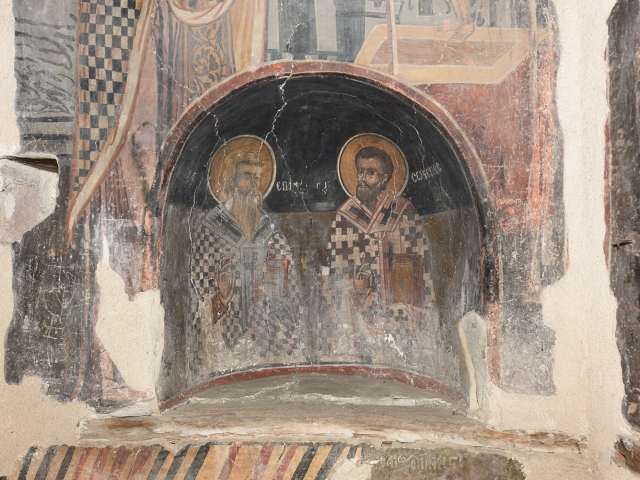 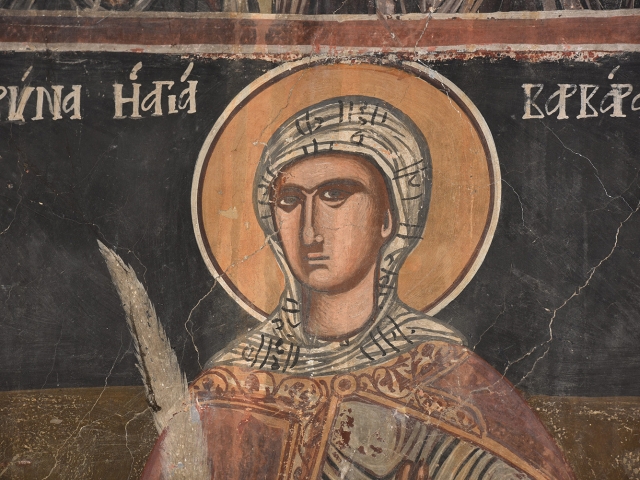 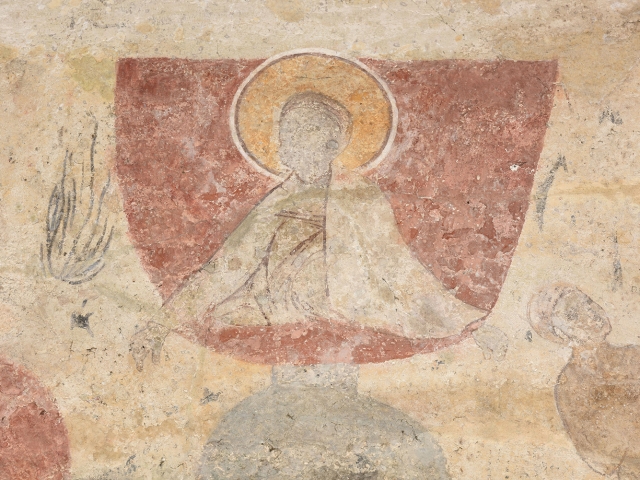