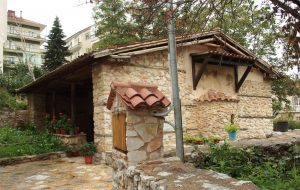 The church is located in the northeastern part of the fortress in the vicinity of another medieval church – Holy Anargyroi. The church is built in the homonymous Eleusa parish.

The church dates from the Middle Byzantine period. From that period (13th c.) a painting layer survives, uncovered on the eastern altar wall. The archeological studies of the monument revealed two graves, probably of the original donors. In 1608/9 the church was reconstructed and redecorated with the funds of archon Thomas Sarandis and his wife Thomai. 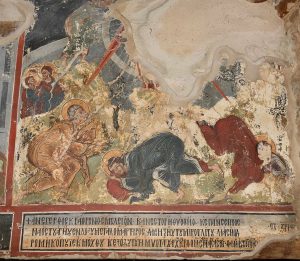 The church is a single-nave, one-apse building with a wooden roof and without a narthex. The eastern wall of the altar with the apse (prominent on the outside) and a small prosthesis niche survive from the initial building. In the 17th c. the church was reconstructed and expanded to the north and to the west. A bigger prothesis niche was added. The naos is lit by two windows on the southern and on the northern walls. The entrance is in the western part of the southern wall. The patron niche on the southern facade is built above the window, marking the center of the wall. А gallery was added to the south. 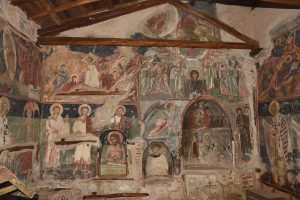 Eastern wall of the sanctuary

The 1608/9 frescoes used to cover all the walls of the church. An earlier painting layer (13th c.) is uncovered in the church and there is a high probability that the decoration of the early 17th c. repeated it. There are no data about the removed murals that belong to the layer from 1608/9.

From the second painting stage in the altar survives the upper part of the Ascension above the apse concha. On the lower register of the eastern wall there is a scene of the post-resurrection appearances of Christ: the Myrrhbearers at Jesus’ Tomb, and the episode of the Apostles at the empty tomb. In the prothesis niche, added in the 17th c., there is a depiction of Christ in the tomb. Above it Christ Emmanuel giving a blessing with both hands (unpublished image). To the north there are frontal depictions of two deacons. On the northern altar wall, as per tradition, is depicted the Vision of St. Peter of Alexandria, and on the plinth – the figure of Arius in hell. On the southern wall two Fathers of the Church, part of the Officiating Church Fathers composition, are facing eastwards to the apse. Above them starts the cycle of the Great Feasts with Nativity and continues through the altar screen with the scenes of Presentation of Jesus in the Temple, Baptism, Raising of Lazarus, Entry into Jerusalem and Transfiguration. No mural painting survives on the western wall. On the northern wall there are fragments of the Betrayal of Judas and of Pilate’s Court. A small fragment of a scene – an open grave, probably part of the Lamentation, precedes the Descent into Hell (in the altar). 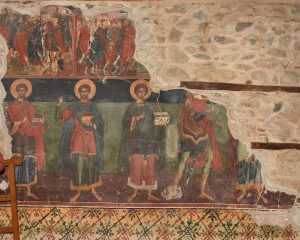 Northern wall of the nave

The lower register presents full-length figures of saints. First before the altar is St. John the Precursor as Angel of the Desert. After that there is a window, which sides feature the images of the two Proto-apostles Peter and Paul. The line continues with the images of St. Nicholas of Myra, St. Patapius, St. Anthony the Great and another unidentified monk. In the depth of the door is depicted St. Marina. The northern wall preserves the images of three healer saints: Cosmas, Damian and Pantaleon. There follow warrior saints, among whom St. Mercurius, testing his arrow. Right before the altar there still can be seen part of the patron composition: St. Demetrius on horseback, stamping down a naked figure representing the evil, and the flanking figures of his adherents St. Nestor and St. Lupus.

In the patron niche on the southern facade there is another depiction of St. Demetrius on horseback, defeating the last king. To the west of the niche we can see Christ’s Baptism and the fresco-icons of Christ Pantocrator and Theotokos of the Hodegetria type.

On the eastern facade above the apse concha there are also fragments of a severely discolored composition with a dedicatory inscription (13th c.). 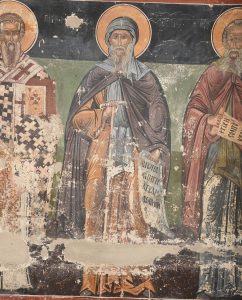 St. Antony the Great – southern wall of the nave 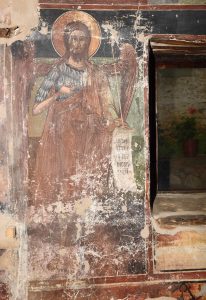 St. John the Baptist – southern wall of the nave

The frescoes were made by two icon-painters. We see the hand of one of them in the painting of the Theotokos Church of Archon Apostolakis. Although the patron saint’s image is usually depicted above the entrance of the temple, in St. Demetrius it is set in the center of the southern facade. Similarly, in the Theotokos church of Archon Apostolakis the image of the Mother of God is in the center of the northern wall of the naos regardless of the division of the mural registers. The atelier, to which the same icon painter belonged, made the frescoes in the church of the Slimnitsa Monastery (1606/7) and in the church of the Presentation of the Virgin Tsiatsiapa in Kastoria (before 1613/4) 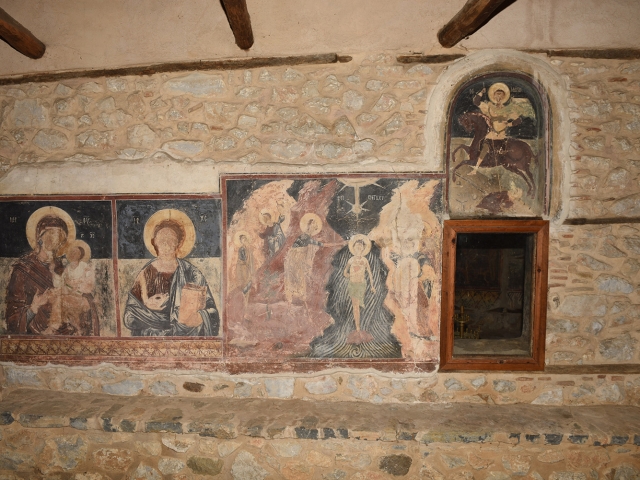 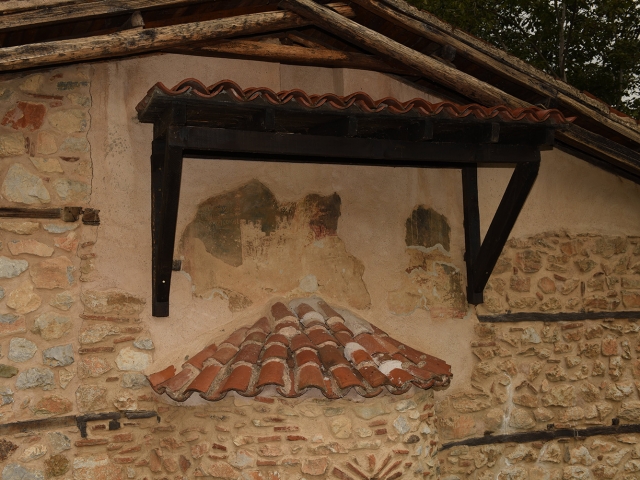 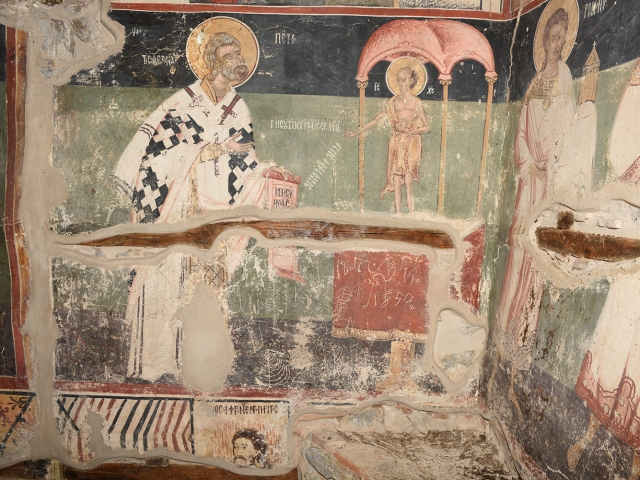 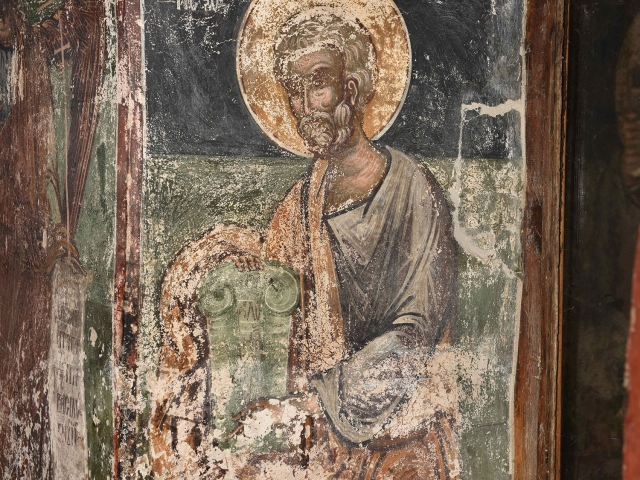