The monastery of St. Prochorus of Pcinja is located in the southern part of the Republic of Serbia, near the river of Pcinja. It is situated in the hollow between the mountains of Kozyak, Shiroka Planina and Ruen.

The monastery’s early history is connected with the texts of the vita of St. Prochorus of Pcinja according to which the saint was born and lived in the region of Ovche Pole, today in the northern part of the Republic of Macedonia. He withdrew in a cave near the village of Staro Nagorichane where he spent many years. The place was attacked by robbers and he moved to the mountain of Kozyak above the river of Pcinja, near the present town of Vranja. There he met with the emperor-to-be Romanus IV Diogenes (1068-1071), to whom he predicted the ascent to the throne. In honor of the saint the emperor built the monastery of St. Prochorus of Pcinja. The scholars believe that this story is based on local legends that entered the text of the vita only in the end of the 18th c.

The first direct clues of the existence of the monastery are preserved in the Karlovački rodoslov (genealogy) of 1503 where the church of St. Prochorus is listed among the churches built by King Milutin. This evidence makes scholars refer the erection of the building to the period 1309-1316. In support of this they note the existence of a ceramic plaque with the inscription of the name Sava (probably the Serbian archbishop Sava III). The church was decorated in the same period.

Today the catholicon is an architectural complex in which the separate stages of the reconstruction are visible: the church was built in the 14th c., it was then renewed in the 15th c., in the 16th the tower with the chapel was added, and in the end of the 19th c. the new building was erected, which incorporated some parts from the old building.

The architectural particularities of the medieval church are hard to decipher due to the later interventions of the end of the 19th c. The original church was a single-nave vaulted building with a naos and a narthex. After the construction of the new building in the 19th c. the vault, the western wall, the narthex and parts of the northern and southern walls have been destroyed and the eastern wall and parts of the southern and of the northern walls have been integrated in the eastern part of the temple.

The paintings of the 15th c. are preserved fragmentarily in the eastern part of the temple. It dates to 1488-1489 as written in the donor’s inscription describing the donation of Marin from Kratovo, son of priest Radon. Unfortunately, the frescoes are only partially preserved, which doesn’t allow a full reconstruction of the painting program. The icon-painters who renewed and redecorated the temple in the 15th c. have largely followed the iconographic program of the 14th c.

The eastern wall features the compositions of Ascension, Annunciation, the Meeting of Mary and Elizabeth, Communion of the Apostles, Oranta in the apse concha, the Officiating Church Fathers composition and the figures of St. Polycarpus, St. Daniel the Stylite, St. Archdeacon Stephan. On the southern and the northern walls are presented scenes from the Great Feasts and the Passions of Christ, a cycle of the Acts and Miracles of Christ, and a register with full-length figures of saints (St. Cyril of Alexandria, St. Clement of Ohrid, St. Prochorus of Pcinja, St. Sava of Serbia, St. Romanus, etc.).

The iconographic particularities and the style of the painting in the church of St. Prochorus of Pcinja are part of a wide circle of monuments of the end of the 15th c. – the first decades of the 16th c. connected with Kratovo (northeastern Macedonia), one of the richest centers in the Balkans of that period.

The study of the surviving fragments reveals that in all probability the icon-painters were trained in a similar environment. They were familiar with and used models similar to those in the St. Peter and Paul church in Orlitsa Cloister (1491), the church of the Dormition Monastery in Mislovshtitsa (end of the 15th c. – beginning of the 16th c.) and St. Nicholas in Gornjak Monastery (around 1490). Unfortunately, the painting in the above-mentioned sites is partially preserved which does not leave room for a complete iconographic and stylistic comparative analysis. Nevertheless some shared characteristics can be distinguished and illustrated with numerous similar images and scenes, such as the following: the image of Christ from the scene Incredulity of St Thomas in Orlitsa and in the Healing of the Leper in St. Prochorus of Pcinja; St. Cyril of Alexandria from the churches of St. Prochorus of Pcinja, the monastery of Mislovshtitsa and the cloister of Orlitsa; the figures of St. John Chrysostom from St. Prochorus of Pcinja and the church in the cloister of Orlitsa, etc. There are also some common features in the development of the figures of the apostles in the scene of the Ascension in the church of St. Prochorus of Pcinja and in the Orlitsa cloister, as well as the angel depicted in the apse concha of the church in Orlitsa and that in the Baptism composition in the church of St. Nicholas in Gornjak.

In these four churches the style of different icon-painter teams can be distinguished. This could account for the common iconographic features but also for many of the differences in the compositions. They regard the selection of the themes, the development of some of the figures, the inscriptions of the scenes and the texts on the scrolls. Gojko Subotić believes that the murals from the dome of the catholicon in the monastery of Lipovac, the miniatures of the Slepchе Gospel, a fragment of the facade of Panagia Rasiotissa in Kastoria (end of 15th c.), among others, can be ascribed to the production of this artistic circle. The same is valid of a fragment of an icon with the image of St. Stefan from Kratovo (15th-16th cc.) which has a parallel in the church of the Dormition Monastery of Mislovshtitsa.

Jesus Christ from the composition of the Incredulity of Thomas, the Church of St. Peter and St. Paul in the nunnery of Orlitsa and Jesus cleansing a leper from the monastery of St. Prohor of Pčinja 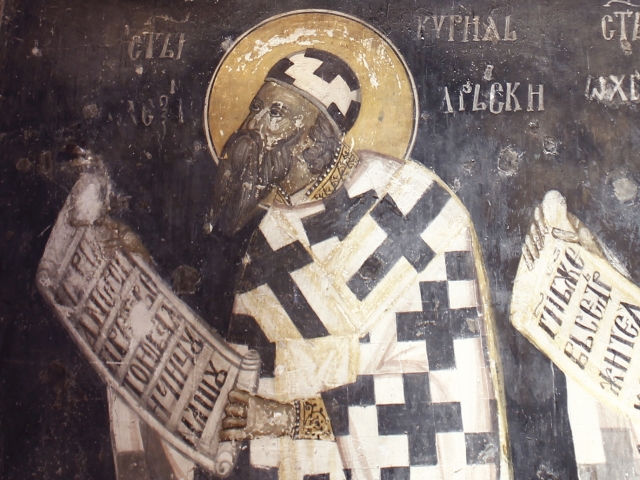 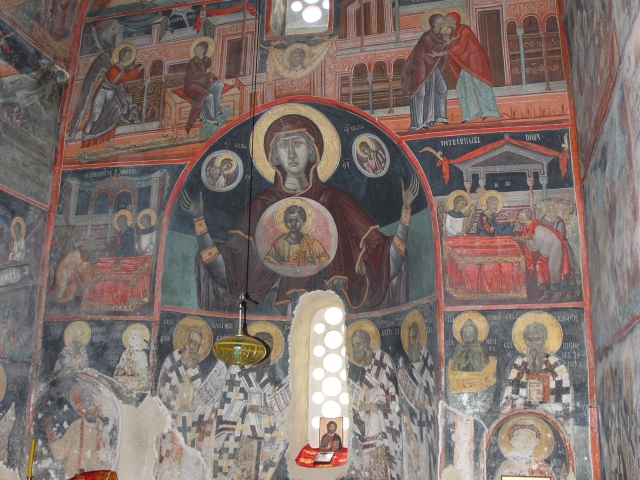 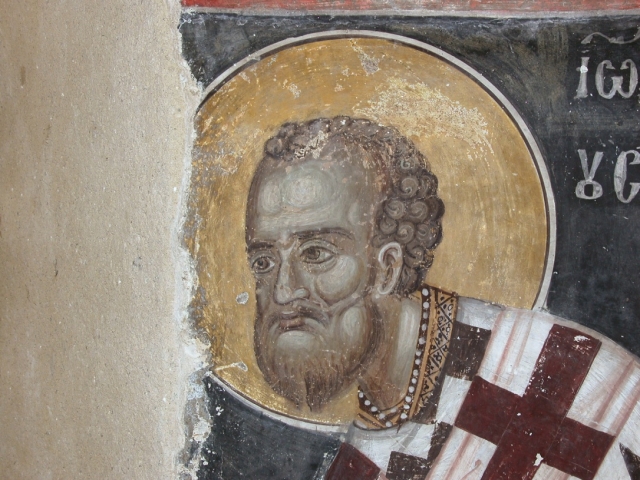 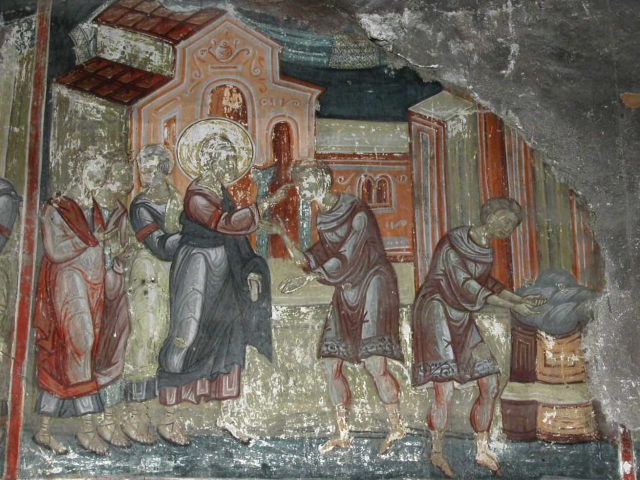 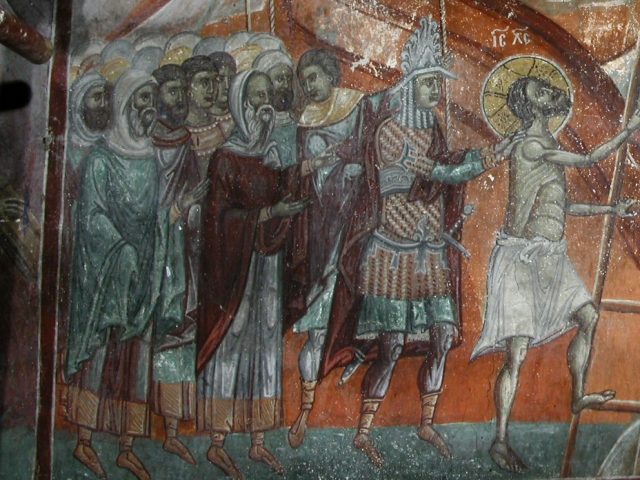