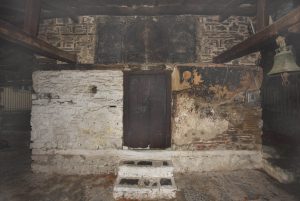 The western façade of the St. Nicholas Magaliou church in Kastoria

The church is located on Τόκα Street in the Iconomou quarter in the town of Kastoria, Northern Greece.

The inscription on the portrait of the donors Aktasis and his mother reads 1504/1505 noting only the year of the death of the donor. M. Garidis suggests that the initial painting of the church was carried out in the last quarter of the 15th c. and that some 20 years later, after Aktasis’ death the donor’s portrait was added. We believe that the hypothesis that the church was decorated in or around 1504/1505 is more plausible. Besides the date in the inscription this is supported by the style of the paintings and the paleography of the inscriptions in the monument, which are clearly different from the earlier works of the Kastoria artistic circle.

The church is small, with a single nave and one apse, the entrance is from the west. It was built before 1505 in rubble masonry and bricks, reinforced by timber beams.

The frescoes on the northern wall of the St. Nicholas Magaliou church in Kastoria

The second painting layer covers the altar space: the eastern wall and the eastern parts of the northern and southern walls. It dates from the 1660s – early 70s and was probably implemented by a local atelier that worked on the restoration of five Kastoria churches. The closest in iconographic features is the church of St. Nicholas Kiritsi. Badly preserved late mural paintings are visible on the western facade of St. Nicholas Magaliou.

The images on the northern wall are set in three registers where only the lowest – featuring preserved upper half of the standing figures of donors and saints – is separated with a red line. The scenes in the two upper registers, dedicated almost exclusively to the Passions of Christ, interlace in a continuous frieze without any delimitation between the separate compositions. The same method of representation has been chosen by the icon-painters who have decorated the church of St. Theodore near Boboshevo (early 16th c.).

The highest register on the northern wall of St. Nicholas Magaliou includes the scenes of Mocking of Christ, Entry into Jerusalem, Crucifixion and the Myrrhbearers at the Tomb of Christ. The next scene, the Descent into Hell, was depicted in the 17th c. but part of the earlier layer is visible and probably presents an analogical composition. In the second zone there are depictions of the Christ Being Led to the Crucifixionwith Pilate’s cavalry, Nailing to the Cross, Deposition of Christ, Judas’ Repentance and death and Lamentation of Christ.

The first register begins from the west with the donor’s portrait of Aktasis and his mother; the donor’s hat penetrates into the upper zone. There follow two couples of warrior saints in noble attire, facing each other and depicted under painted arches: St. Theodore Stratelates and St. Theodore Tyron and St. George and St. Demetrius. The latter couple is presented with the high hats typical of the art of Kastoria masters. In front of the iconostasis there is the composition of Deesis with Christ King of Kings and PanagiaPantanassa. The composition is among the emblematic works of the Kastoria artistic circle of the 15th-16th cc.

In a niche in the southern wall before the iconostasis there is a big half-length image, similar to an icon, of the blessing St. Nicholas, patron of the temple.

The peculiarities of the painting program and the iconography of the images in St. Nicholas Magaliou Church undoubtedly rank it among the works of the Kastoria artistic production of the end of the 15th – beginning of the 16th c. But the aristocratic style, distinctive of the paintings of the masters of the last quarter of the 15th c., is not found in the murals of the monument in question. Some scholars even label it primitive, others – an innovation influenced by Italian and Gothic art. The closest parallel works of the same Kastoria atelier are the fragments of the murals in the church of St. Theodore near Boboshevo (beginning of the 16th c.). The two monuments are representative in their iconography of the late works of the Kastoria artistic circle but at the same time stand out for their own specific style and paleographic features. 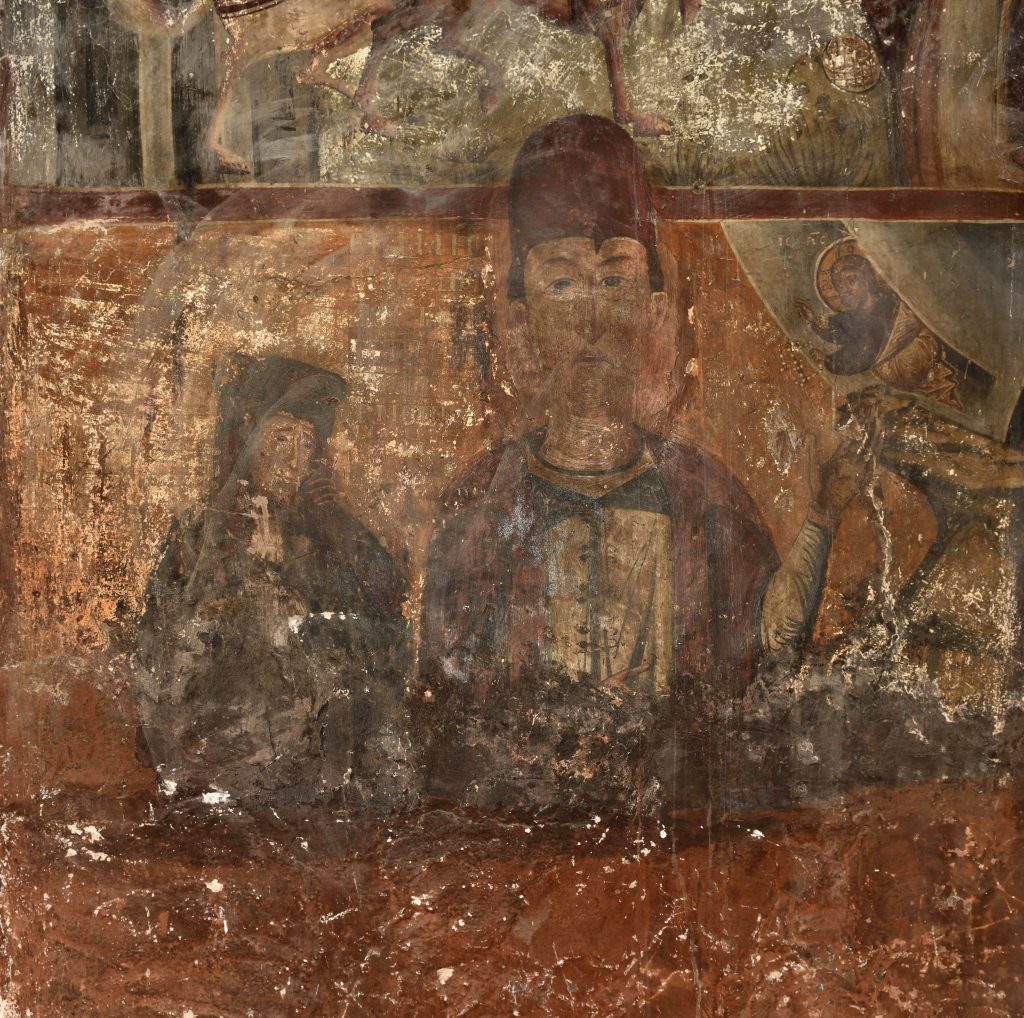 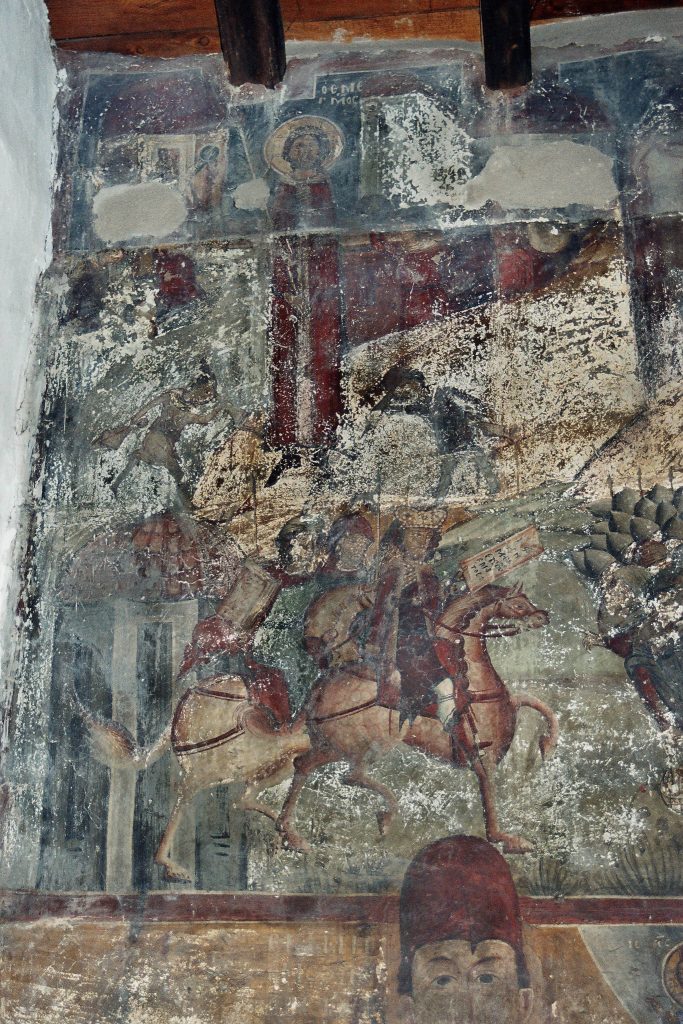 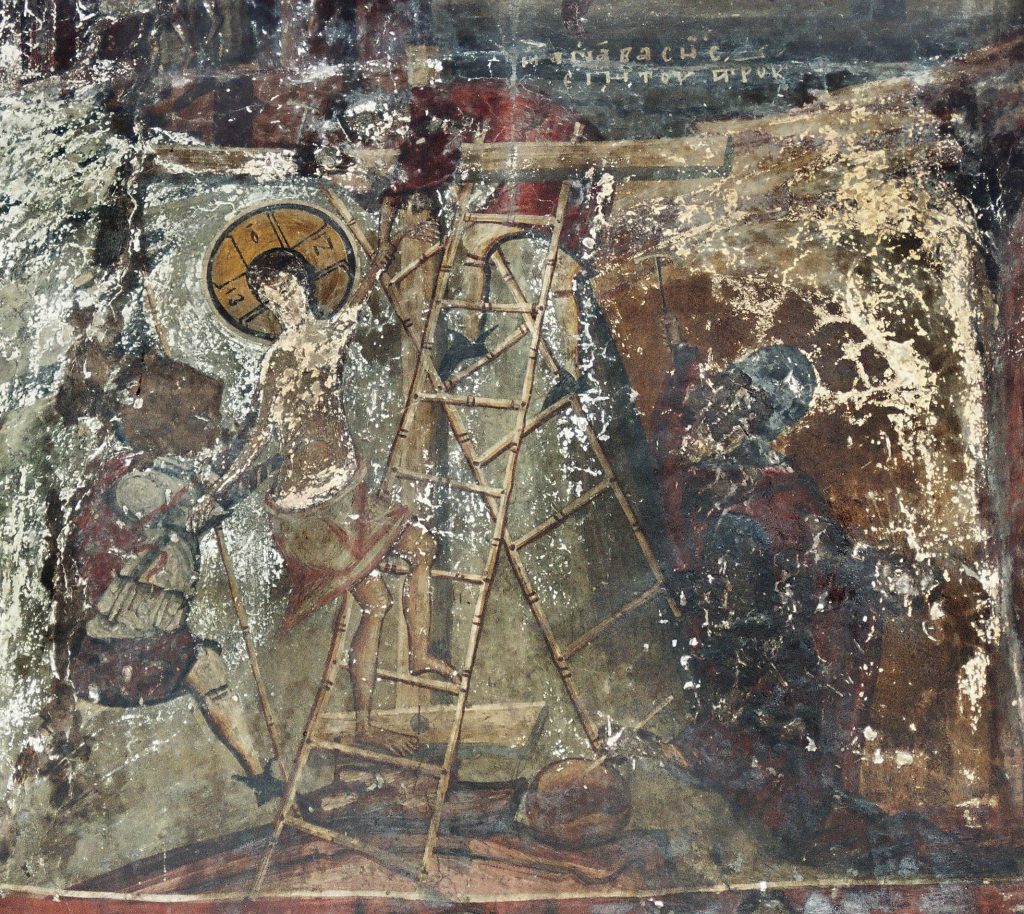 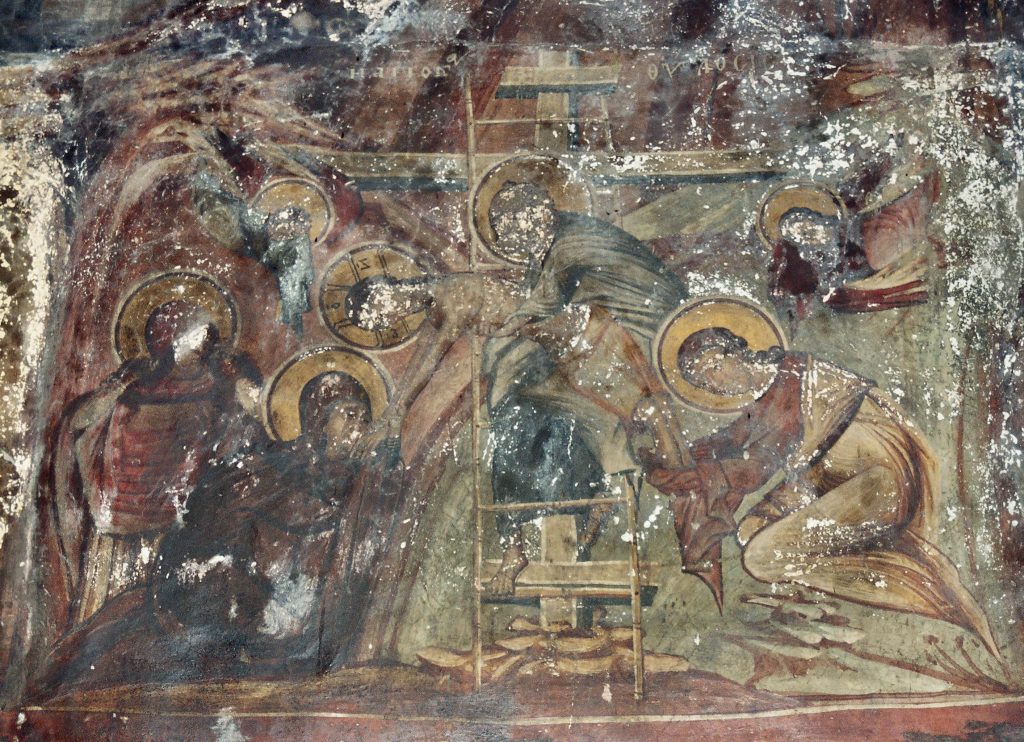 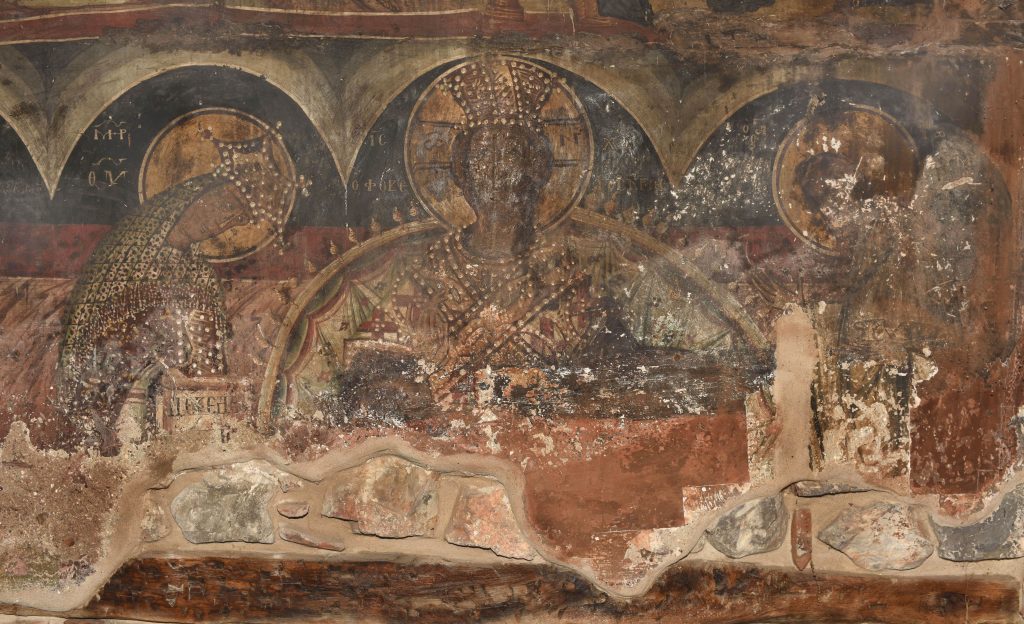 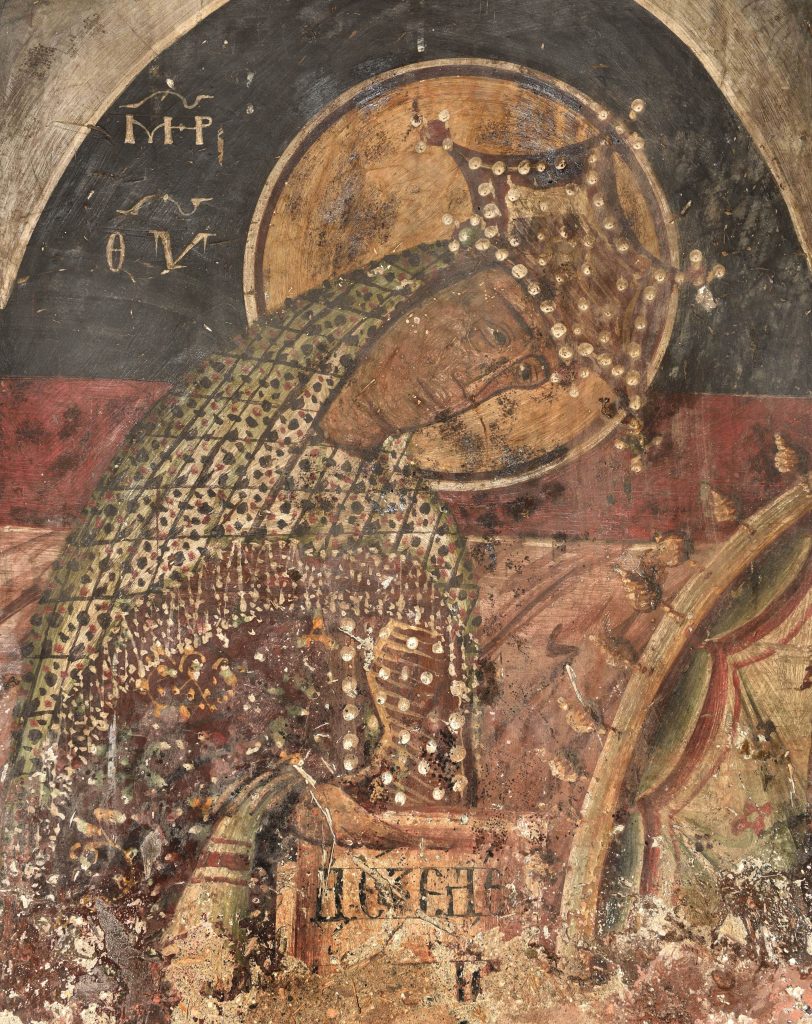 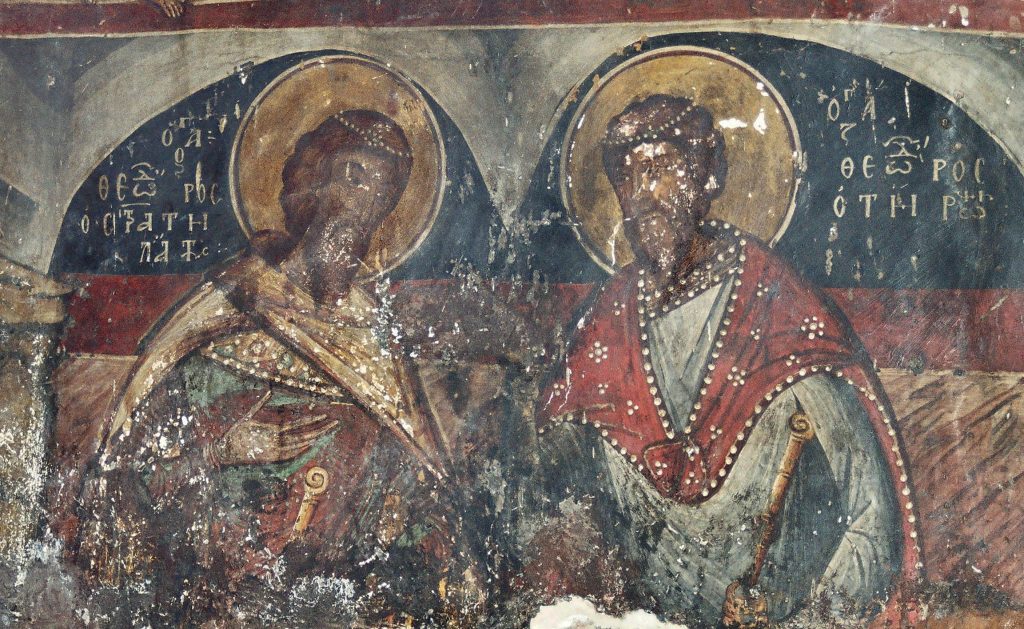 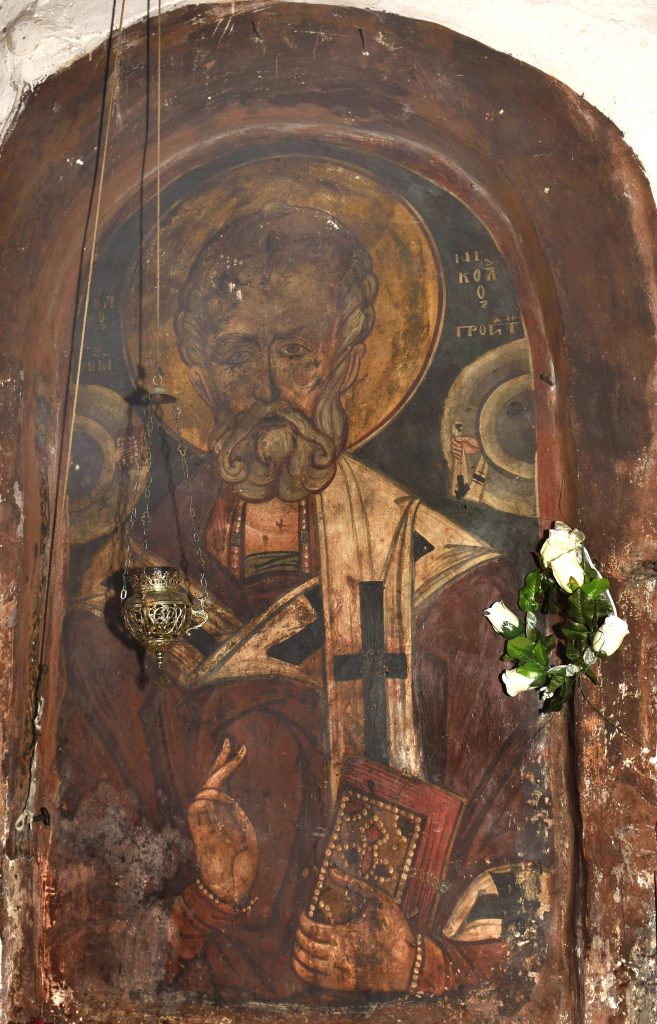