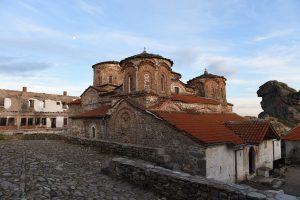 The catholicon of the Dormition Monastery – Treskavec, view from the northwest

The famous monastery of Treskavec is located in the northeastern part of Pelagonia, some 10 km north of the town of Prilep, Republic of Macedonia. The monastery complex is situated right below Zlatovrah – the highest peak of Zlato Mountain which is part of Babuna Mountain. This space has been sacred since antiquity. Besides the monastery it includes an ancient necropolis, the ruins of a medieval church, a rock church, fountains, rocks decorated with paintings, some of which dating from the 14th c. Until recently the whole locality called Manastirtsi was hard to reach but now it can be accessed through a very steep asphalt-paved road.

Treskavec is among the biggest monasteries in Macedonia and is one of the most important monastic centers of the Archbishopric of Ohrid. The origin of its name is in all probability connected to the natural phenomena in the region, located at 1300 m above sea level (from tresak – ‘thunder’).

The recent studies reveal that the main Dormition church was built at the end of the 12th – first half of the 13th c. but the monastery was erected under Andronicus II Palaeologus (1282-1328) and his son and co-emperor Michael IX Palaeologus. Until recently they were considered to be the first donors of Treskavec because of the portrait which presents them being crowned by the Mother of God in the arch of the tower above the main western entrance of the monastery (although painted in 1898, the decoration repeats the earlier layer of the end of 13th c. – beginning of the 14th c.).

Most likely however is that the first donor of the Treskavec Monastery was the Byzantine general Michael Dukas Glabas Trachaneiotes (circa 1235 – 1305 and 1315), prostrator during the rule of Andronicus II and Michael IX. This dating is also suggested by the so-called Paraphrasis of the History of George Pachymeres (Vat. gr. 1775, end of 14th c.– beginning of 15th c.) which mentions that Michael Glabas was a donor of the Constantinople monasteries of Panagia Pammacristos, and Panagia Atheniotissa, the Sozopol church of St. John the Precursor, and the Prilep monastery of Prisklavitsa. Based on this witness as well as on the donor’s portrait painted in the north half of the arch above the main entrance of the monastery – probably of Michael Glabas – Miodrag Marković proves that Michael was the donor of Treskavec (or Prisklavitsa).

Donors of the monastery were also the Serbian kings Milutin and Stefan Decanski but the second main donor of Treskavec was Stefan Dušan whose earliest chrysobull about the monastery dates from 1334-1336. Today the southeastern chapel erected in the middle of the 14th c. is destroyed. Only the western wall still stands featuring the portrait of the donor – the tepchia (aristocrat responsible for the ruler’s estates outside the capital) Gradislav Borilović. In the early 15th c. the monastery was deserted and then renovated again in the 1480s. From Treskavec we have a two-leaved door, royal gates and a fretwork cross from the 16th c., numerous festive icons and icons of the Apostolic row from the 17th – early 18th cc. 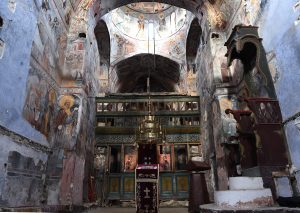 The Treskavec Monastery is a complex of numerous buildings. The catholicon has undergone serious reconstructions in the 13th, 14th and 19th c. which have not been studied completely. The study of the architecture is further complicated by the additional construction works which have been carried out through the centuries. The earliest surviving building was erected at the end of the 13th c. on the foundations of an early Christian basilica. This is a single-nave building, separated by bays from the four inbuilt pilasters supporting the dome. In the altar area, beside the semi-round apse, there are also two niches – a prothesis niche and a diaconicon. The apse is pentahedral from the outside. To the west the church ends with a narthex with a blind dome, of which construction we have a terminus ante quem – 1334.

From the south and from the west of the original church there is an exonarthex dating from the time of the donorship of King Stefan Dušan (1334-1343). Its western part has three sections: the north section is crowned by a dome with an octahedral drum and the southern – with a blind dome.

Again in the 14th c. but in a different stage of construction, in the western part of the northern wall a vaulted chapel was built. Around the middle of the century with the donation of Gradislav in the eastern part of the southern wall of the naos was added another chapel of which only the western wall survives – eastern wall of the later second exonarthex of the 19th c.

In the same century were erected the screens in the southwestern and the northwestern parts of the early exonarthex and the entrance to the exonarthex from the south was walled up.

After a big fire in 1867 new residence and farm buildings were built and the old refectory was restored. The monastery has gone through other big fires, the last being in 2013. It did destroy many of the buildings but left intact the Dormition church. 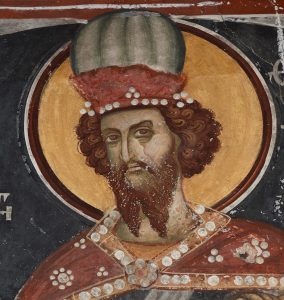 Most of the interior of the catholicon of the Dormition Monastery is covered with frescoes from different periods. The oldest painting dates from 1334-1335 and presents calendar scenes and standing figures of saints in the lower register, situated in the western parts of the exonarthex. By the end of the 1330-40s the two domes in the same western part were also decorated. The donor’s portraits on the eastern wall of the southern part of the exonarthex as well as the facades of this part of the exonarthex are from the 1350s.

The image of the Theotokos in the niche above the southern wall leading to the naos dates from 1431. Based on the extreme style and iconographic similarity of most of the murals in the naos, depicted in the end of the 15th c., with the murals in the Old catholicon of the Great Meteor and other monuments of the Kastoria artistic circle of the same period, the painting of Treskavec is dated to 1483/1484. There is no certain evidence supporting this dating.

The donor’s inscription in the altar space shows that in 1570 this part of the church was decorated with the funds of Stoyan Hranchev. Much later, in 1849, icon-painters from Krushevo decorated the blind dome and the western part of the naos.

The 15th c. frescoes occupy the dome, the space under the dome, the central and the western bay of the monastery catholicon naos. Traditionally the dome presents the figure of Christ Pantocrator and Divine Liturgy and the drum is occupied by figures of prophets, whereas the pendatives feature the images of the four evangelists. These images from the high parts of the temple have undergone later interventions, probably in 1570.

The highest register of the naos features the cycle of the Great feasts. What is special is that it includes the images of prophets in the scenes of Presentation, Baptism, Crucifixion, Deposition from the Cross, Transfiguration and Ascension.

A separate third register presents 14 especially detailed compositions of the cycle of the Passion. It begins in the altar space with the Last Supper and continues on the southern wall and on the walls of the pilasters with the Washing of the feet, the Prayer in the garden of Gethsemane, the Betrayal of Judas, Christ before Pilate, the Leading of Christ and the Denial of St. Peter. On the northern wall and on the pilasters are presented the Carrying of the cross, the rare composition of the Soldier giving Christ vinegar and bile to drink, Nailing to the cross, Judas’ repenting and suicide, Lamentation, Division of the clothes and the Myrrhbearers at the Tomb of Christ (in the altar). 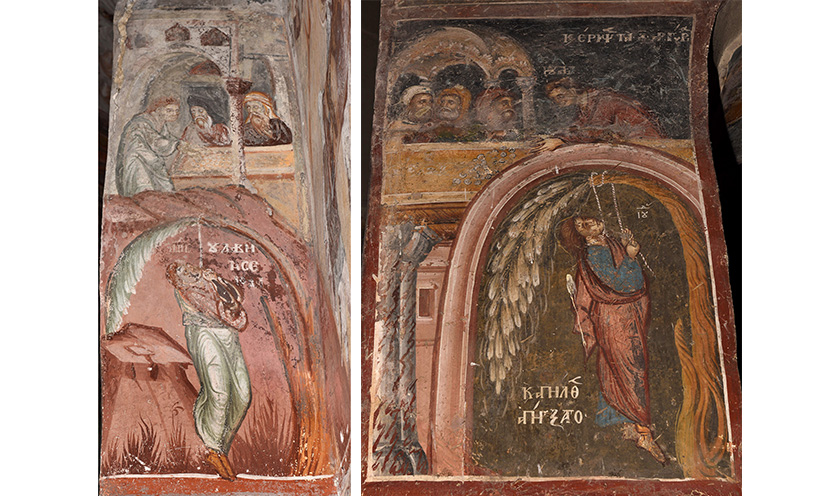 Rebellion and Suicide of Judas, Treskavec Monastery and St. Nicetas Church near Čučer

Regarding the 15th-c. painting in the monastery of Treskavec many authors underline the combination of the Byzantine idealism and the Gothic-Renaissance realism in the iconographic elements, for example in the scenes of the Crucifixion and Judas’ Betrayal. In fact, in these particularities, in the depiction of the Royal Deesis with the warrior saints in noblemen’s attire, in the elaborate details, etc. can be seen the characteristics of the artistic circle of Kastoria of the 15th-16th cc.

The painting in Treskavec, together with its closest iconographic and style parallels in the murals in the Old catholicon of the Great Meteor (1483), St. Nicetas near Čučer (1483/1484), St. Nicholas of nun Eupraxia in Kastoria (1486) and the fragments in the Sts Peter and Paul church in Eginio (Pieria, Greece, 1485) is defined as work of the main Kastoria master who was also among the founders of the leading atelier of the Kastoria artistic production of the 1480s-90s.

Smolčić-Makuljević, S. Two Models of Sacred Space in the Byzantine and Medieval Visual Culture of the Balkans. The Monasteries of St Prohor of Pčinja and Treskavac. – Jahrbuch der Österreichischen Byzantinistik, 59, 2010, 191-202. 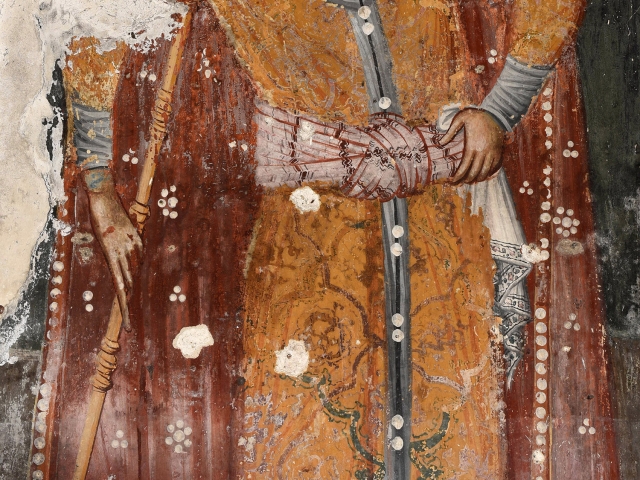 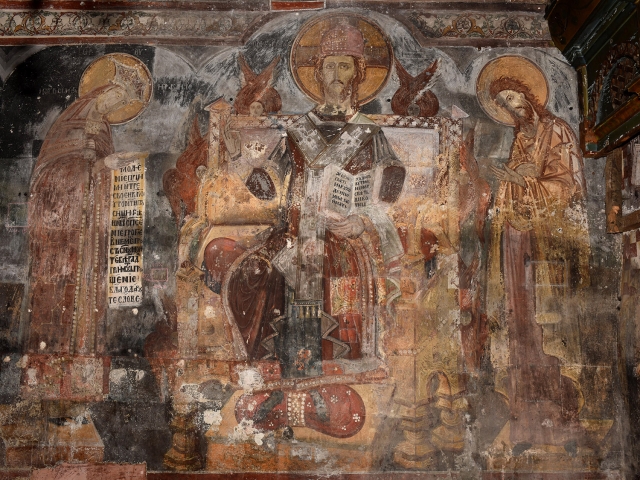 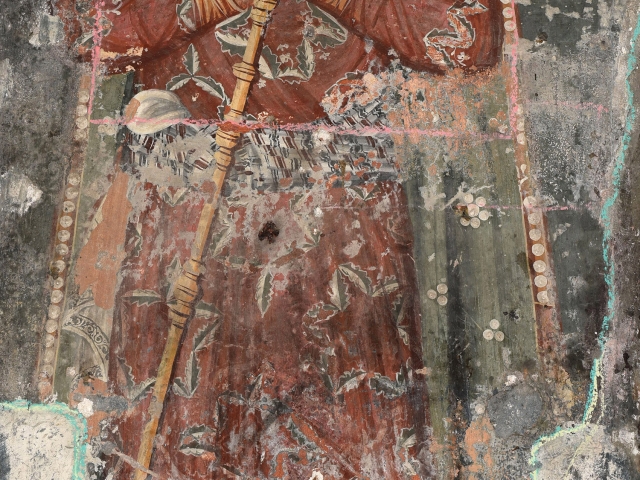 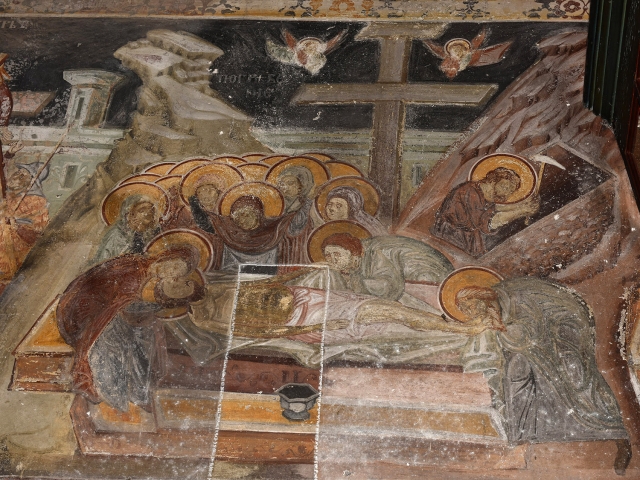 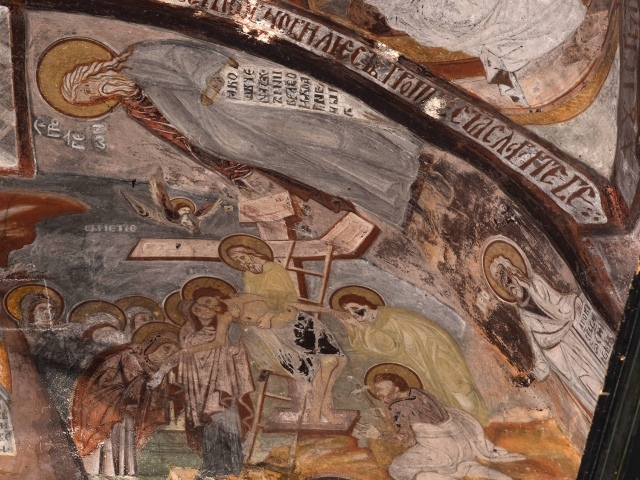 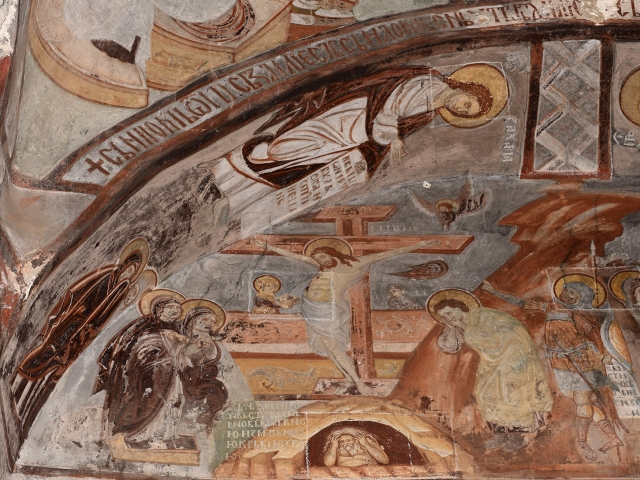 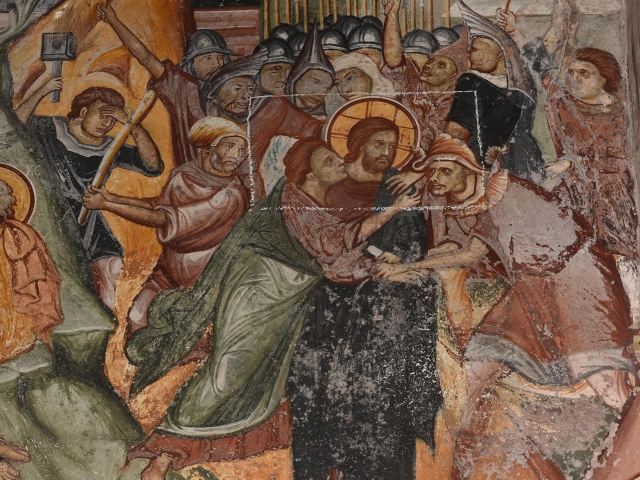 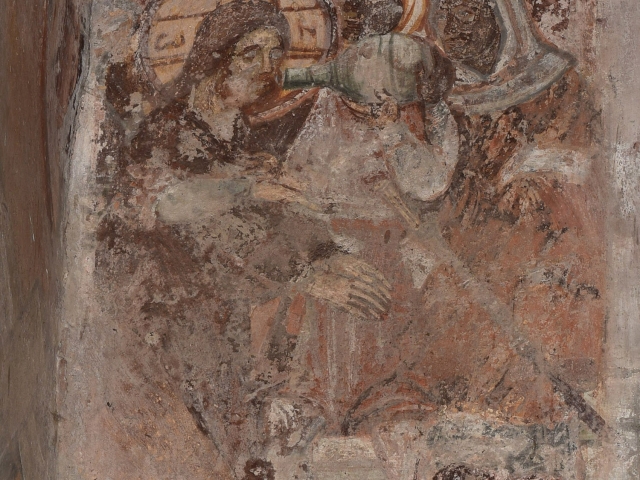 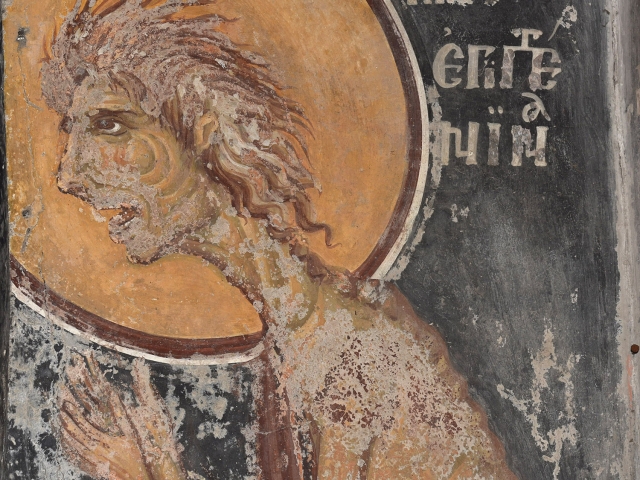 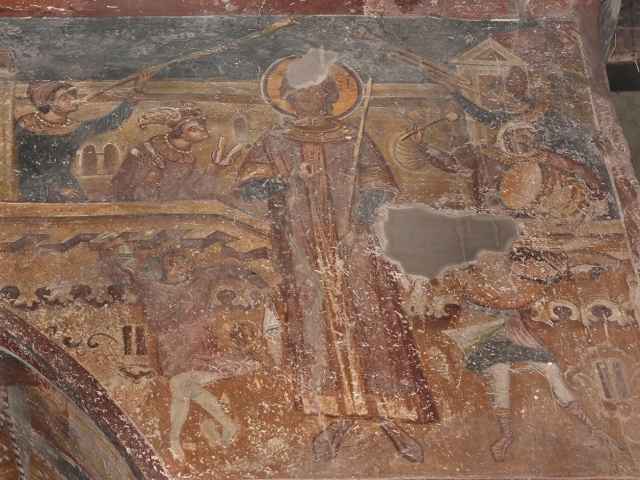