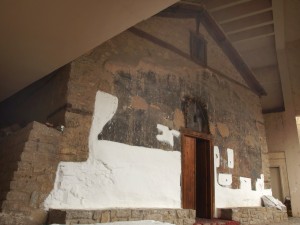 The church was built in the early 17th c. According to the donor’s inscription above the entrance on the western wall of the naos it was decorated in 1605/6 with the funds of archons Apostolis and Ralis, during the service of the Kastoria Metropolitan Mitrofanes.

The church is built on a simple plan, typical of the region of Kastoria in the 17th c. – with a single nave and one apse, covered by a wooden roof. The altar is provided with a prothesis niche and on its northern wall there is another rectangular niche. During a reconstruction the ceiling level of the naos has been lowered thus hiding the upper part of the scenes of the top painting register. A newly-put window on the southern wall has destroyed some of the painting decoration. 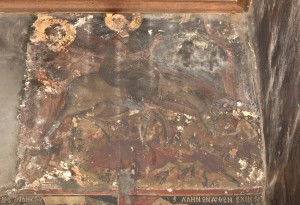 The Entry into Jerusalem

A small part of the altar program of the church survives. Some fragments of the painting layer reveal that in the apse there was a depiction of Theotokos Wider than Heavens and beneath it the composition of the Officiating Church Fathers. The latter continues to the south including the images of another four church fathers, facing the center of the apse: probably there used to be a depiction of Christ Lamb of God. On the northern wall is preserved the image of Christ from the Vision of St. Peter of Alexandria, unusually placed on the left side of the composition. In the upper zone to the south of the apse there is the scene of the Supper at Emmaus. It is part of the cycle of the Post-Resurrection Appearances of Christ but in the context of the altar program it achieves a distinct Eucharistic meaning. In the same zone on the southern wall in the altar starts the cycle of the Great Feasts with the Nativity scene (the Annunciation scene was most likely depicted in the altar).

The painting in the naos is organized in three zones. The highest is occupied by scenes of the Great Feasts complemented with a couple of scenes of the Passions of Christ. The entire middle register features a cycle of sixteen scenes of the Akathist hymn, dedicated to the Mother of God, worshiped here as the patron of the church. Regardless of her patronage the inclusion of the Akathist in the program of the naos is an unusual decision since its traditional place is in the narthex. The lower register presents full-length figures. Most interesting is the choice of the saints near the altar, in and under the niches, built in the southern and the northern walls. Immediately before the altar there is a depiction of St. Nicholas the New, especially popular in the region of Epirus and Thessaly. There follows a big niche with the image of St. Nicholas of Myra, flanked by the images of Christ and the Theotokos in miniature, offering him a Gospel and an omophorion respectively. Under the niche there is a half-length depiction of two saints: St. Petka and St. Nedelya. The rest of the images are of healer saints, monks, ascetics and warriors, and the last before the altar is the most revered among them – St. George. The western entrance is flanked traditionally by St. Archangel Michael and St. Constantine and St. Helena, equal-to-the-apostles. 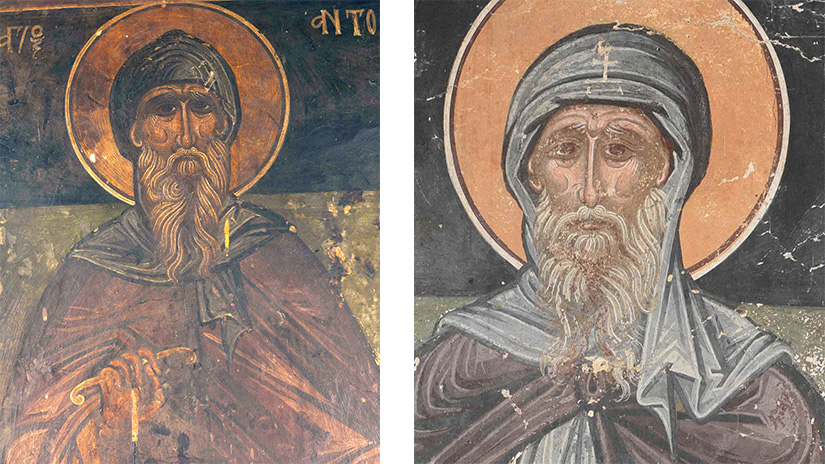 St. Anthony the Great from Theotokos Church of Archon Apostolakis and Church of St. Demetrius of Eleusa

In the center of the northern wall, in a niche similar to the one built for St. Nicholas, there is a painting of Theotokos Glykophilousa. As noted by M. Paisidou, this unusual place of depiction on the northern wall is connected with the theme of the Incarnation, to which refer the stanzas of the Akathist hymn that encircle it. The scene of the Crucifixion above the niche complements the soteriological meaning of the image. To these valuable observations should be added the fact that the location of the church’s patron on the northern wall of the naos (usually before the altar) is a specific feature of several monuments from the second half of the 16th and of the 17th c., some of which were made by Linotopi icon-painters.

Under the niche there is a badly preserved image of Prophet Elijah (unpublished). It can be connected with an important aspect of the naos program. As a witness of God, taken to heaven while still living, so that he could see no death, this image is a pendant of the saints depicted under St. Nicholas: Petka and Nedelya, who are connected with the days of Christ’s Crucifixion and Resurrection. With the images of the Mother of God, Champion of mankind on the Day of the Final Judgement and of St. Nicholas the Miracle Worker, who is very popular in the region, the naos program acquires a clear eschatological meaning and is a proof of the high theological preparation of its author.

In the niche above the door on the western facade there is another depiction of Theotokos Glykophilousa, flanked by archangels in medallions. Around it there is a large-scale composition of the Final Judgement. 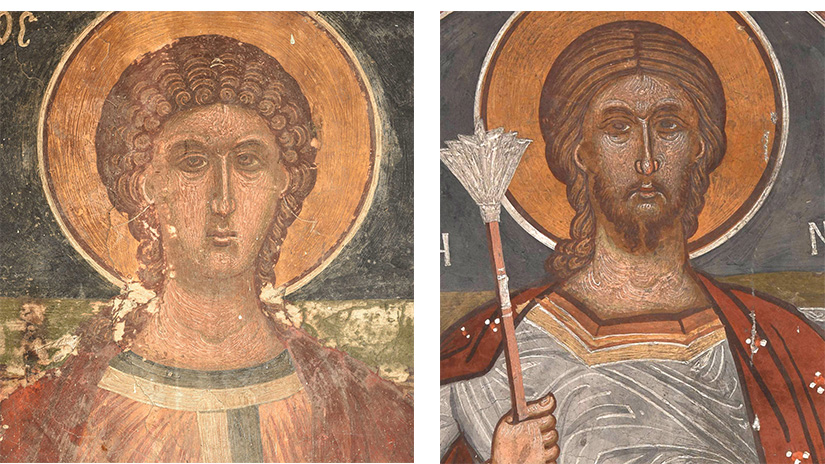 The panting of the church was made by one leading icon-painter and an assistant. He also worked on the decoration of the naos of the monastery of Slimnitsa (1606/7), as well as on the church of St. Demetrius of Eleusa (1608/9) and the church of the Presentation of the Virgin Tsiatsiapa (before 1613/4), also in the town of Kastoria. Based on the epigraphic material (identical with the material from the church of Apostolakis) G. Velenis believes that part of the mural decoration of the catholicon of the monastery of St. John the Baptist in Kato Meropi (1613/4) (Epirus) can be attributed to the same icon-painter – the frescoes are in a bad condition and some of them have been repainted.

St. Procopius from the church St. John the Baptist Church in Kato Meropi (1613/4) and Theotokos Church of Archon Apostolakis

The master who headed the icon-painting team in the above-mentioned monuments belongs to a bigger atelier, comprising other icon-painters with similar style and iconographic handwriting. Their painting was similar to the works of the icon-painters coming from the mountain of Gramos (Linotopi, Gramosta). 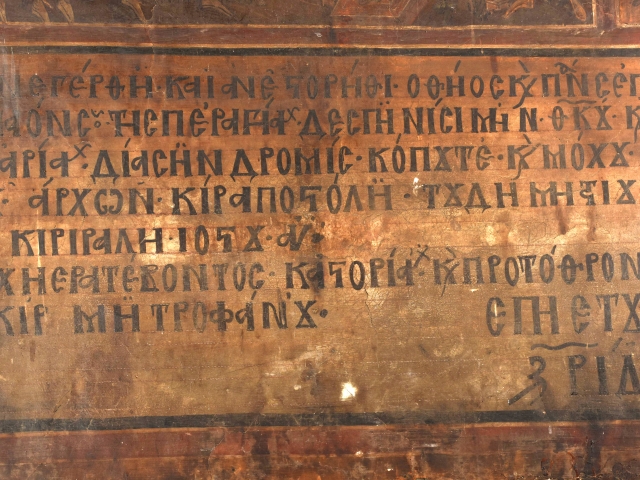 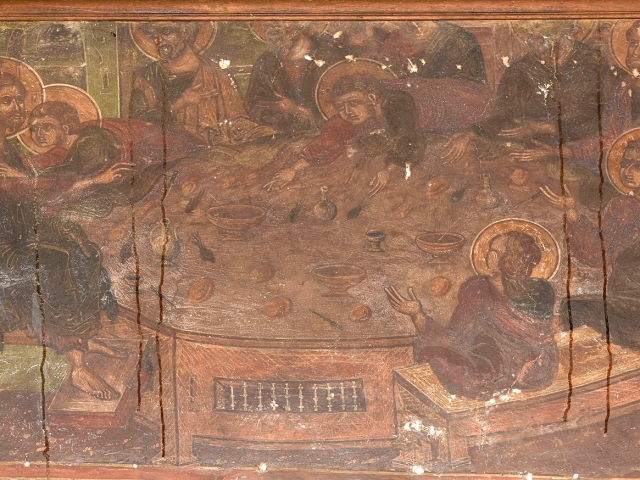 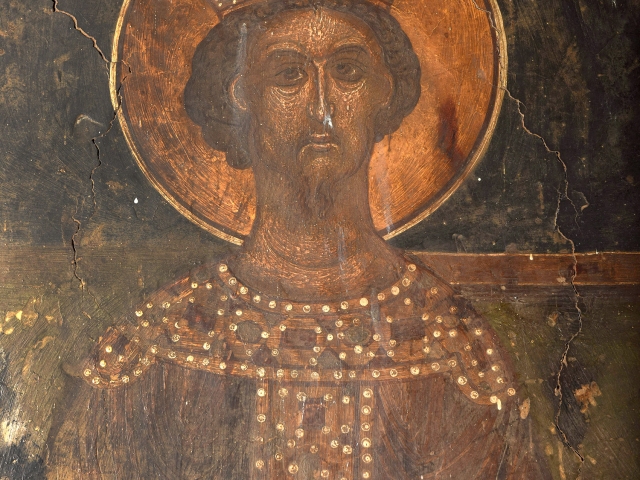 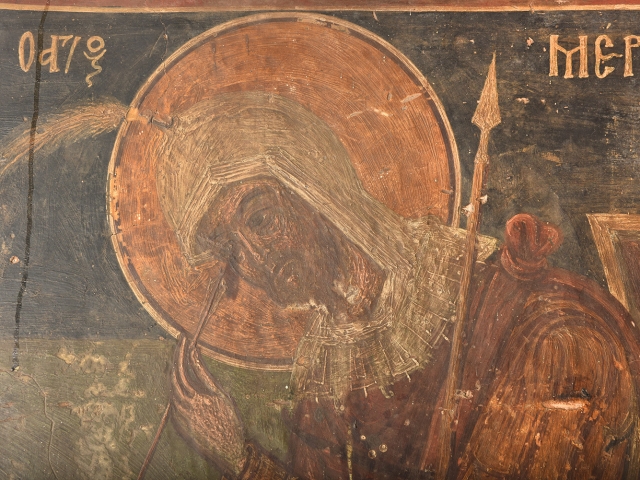 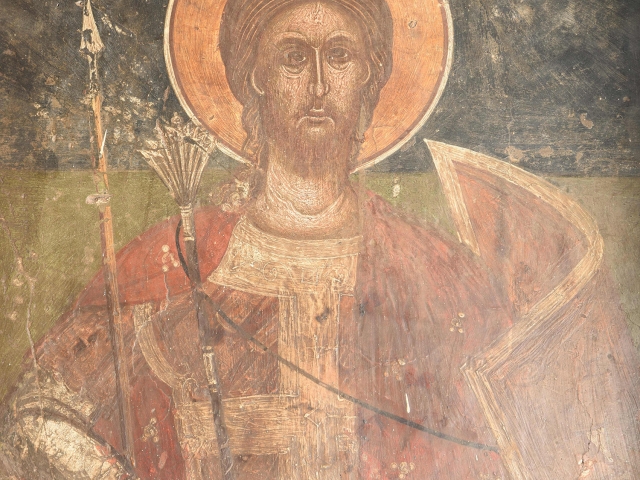 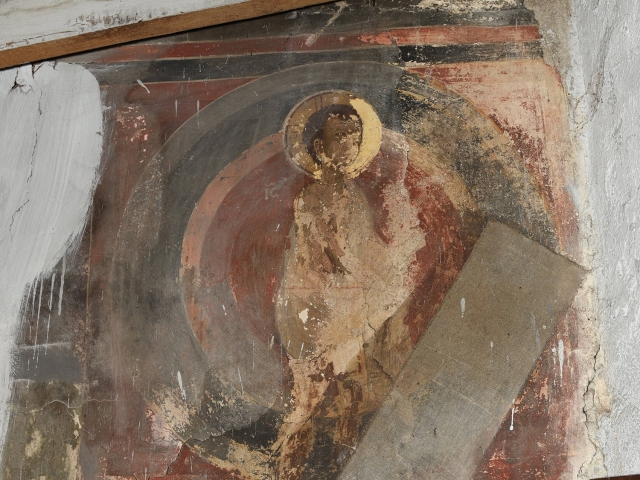