The Rozhen Monastery of the Nativity of the Theotokos is located at some 4.5 km to the southeast of the town of Melnik on a bare hill going steeply down south to the village of Rozhen. The monastery reveals a wonderful view on the famous white Melnik rocks surrounding it from all sides.

There is no information about when the monastery was founded. During excavations on the monastery yard have been discovered coins from the time of Byzantine emperor Manuel VIII Palaeologus (1259-1282). In an illuminated manuscript from the end of the 13th c. (now at the library of the Patriarchate of Jerusalem, Codex Tafou 5) there is a marginal note informing that it originates form the Monastery of Rozhen.

After the conquest of the Balkans the monastery fell into decay but in the 16th c. it experienced a revival and was restored. After the middle of the century the main monastery buildings were erected: the main church (the catholicon) and todays’ southern wing with the refectory on the second floor. In 1662 the monastery ossuary was built and decorated. Soon after that the monastery was damaged in a big fire. In the beginning of the 18th c. a restoration of the main church began; on an extant stained glass window of the church there is a date 1715. In the second half of the century the monastery fell into decay again and became a cloister of the Monastery of Iviron in Athos. The copy of the miraculous Iviron icon of Theotokos Portaitissa and its proskinetarion which were commissioned by Melnik citizens date from 1790. The decline continued through the 19th c. and in 1899-1901 according to Paul Perdrizet there were only three monks in the monastery. In the early 20th c. the eikonomos of the monastery was looting it until Yane Sandanski drove him away and the monastery became part of the Exarchate of Bulgaria. In 1921 the International Court in The Hague confirmed that the monastery belongs to the Bulgarian Church.

The plan of the monastery is of an irregular hexagon which sides – the monastery wings – have been built at different times. The oldest wing is the southern which, judging from the frescoes in the refectory dates from the end of the 16th c. The monastery buildings enclose an inner courtyard where the main church rises. It is rectangular with three naves with three apses and a wooden gable roof. To the southern façade was added an open gallery and to the western – a medium-sized kiosk. The church is big – together with the central apse it is 27 m long and 13 m wide. The spacious naos is divided in three naves by four couples of wooden columns. In the northern part of the narthex a chapel has been set up dedicated to healer saints Cosmas and Damian. By the end of the 18th c. the southern part of the altar was walled in and turned into a chapel to St. George with a separate iconostasis, the so-called small Rozhen iconostasis. The big iconostasis is remarkable for its fine fretwork. The iconostasis together with most of the icons on it date from the early1730s. The fretwork pulpit, the bishop’s throne, the ciborium above the altar, the proskinetarion and a chandelier have been preserved; together with the iconostasis they form a unique artistic ensemble from one period and work of one group of masters.

Frescoes from the 16th c.

The monastery catholicon and refectory were decorated at the end of the 16th and the very beginning of the next century. From this painting stage survive the frescoes in the narthex, in the niches of two windows in the naos (in the niches of the two windows on the northern wall there is paining from that period) and on the façade of the catholicon, as well as fragments from the refectory and the wall of the gallery in front of it. No donor’s inscription is preserved but there are two dates: the years 1597 written in the niche above the narthex door on the southern façade and 1611 – to the right of the same door (the latter date today is illegible). The first date refers to the images of the Theotokos Enthroned of the southern niche and of Christ and the Apostles in the niche on the western façade. Judging from the style features we can assume that the date refers also to the rest of the frescoes on the southern façade: the Ladder of Saint John Climacus and the Last Judgement, as well as the scenes in the window niches of the naos and the refectory.

There is no data about the original frescoes in the naos of the main church but the frescoes in the narthex have been preserved completely. The frescoes in the narthex are distributed in four registers. The highest register of the northeastern corner features the rare composition of the chant Axion estin flanked by the monumental figures of prophets Isaiah and Ezekiel and beneath it stands the image of a three-faced angel, also very rarely observed in the iconography of this period. The rest of the scenes on the walls are organized in three cycles, following one from the other: the cycle of the Pentecostarion, the Cycle of the Deeds and Miracles of Christ and the cycle of the so-called Matins. The lowest register is occupied by the figures of prominent church hierarchs in monastic habit. The only ones outside the cycle are the images of the Holy Unmercenaries Cosmas and Damian in the niche above the door in the chapel on the northern wall, of an unidentified woman saint looking at them and of the Holy Mandylion above the window in the western wall. In Georgi Gerov’s opinion the frescoes are an example of monastic art par excellence, characterized by a complex conception, presupposing very educated commissioners and executors.

From the original paintings in the monastery refectory remain only a couple of fragments, whose stylistic features refer them to the end of the 16th c. Unfortunately after an unsuccessful restoration of the room, many of the frescoes can’t be brought back to their original places on the walls. Together with that of the Bachkovo Monastery, the Rozhen Monastery refectory is among the few surviving painted refectories from the post-Byzantine period in the Balkans. From the extant fragments we can make conclusions about its program: in the apse concha is depicted the last Supper and under it the Great Fathers of the Church in monastic habit. On the walls was the cycle of the Akathist to the Theotokos, underneath there used to be a frieze with martyrs in medallions and the lowest register consisted of full-length figures of prominent monks. On the outside wall of the refectory from the side of the gallery were depicted the Ecumenical Councils.

Frescoes from the 18th c. 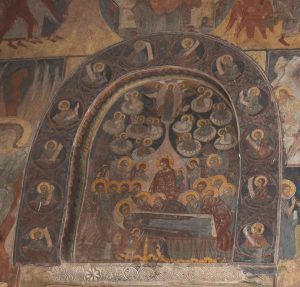 After the big fire of the end of the 17th c., the monastery church had to be overhauled and decorated again. In 1727 the icon-painters Nikola and Teochari painted in the niche above the door on the eastern wall of the narthex the patron scene of the Nativity of the Theotokos. For reasons which remain unknown they were not commissioned to paint the main church. This was done by brothers Anastasios and Alexey hierey from Ioannina in 1732. Probably the Epirus icon-painters were invited on the recommendation of the Melnik Metropolitan Dionisius, also born in Ioannina, who died in 1728. The donor’s inscription informs that the catholicon was painted under the Ecumenical Patriarch Paissius, the Melnik Bishop Antim and hegoumen Anastasius with the funds of the archon and skeuophylax Dukas and other Christians.

Together with their assistants they painted the frescoes in the naos, part of the narthex and the chapel of the Holy Unmercenaries Cosmas and Damian in the northern part of the narthex, as well as the majority of the icons on the iconostasis.

The mural paintings in the naos are organized in four zones. The top zone features Christological cycles: Christ’s Miracles in the altar, the Great Feasts, the Passion of Christ and the Pentecostarion in the naos. Underneath is the register with the scenes of the Akathist to the Theotokos and scenes from the life of the Theotokos, which is unusual but not inexplicable having in mind that the monastery is dedicated to the Mother of God. There follows a frieze of medallions with images of martyrs and in the lowest register are depicted full-length figures of saints, among whom two local martyrs from Ioannina.

The same team of icon-painters has worked in the chapel of the Holy Unmercenaries Cosmas and Damian. The donor’s inscription reports that the paintings were commissioned by the nun Melania who is also depicted on the southern wall. The frescoes include scenes of the Feasts and the Passion of Christ, medallions with martyrs and full-length figures of saints. The iconostastis is remarkable; it bears some archaic features and a small icon of Thotokos Hodegetria, work of the icon-painters of the late 16th c.

The icon-painters of the 16th c.

The icon-painters of the 18th c.

The team of the Ioannina icon-painters Anastasius and Alexius hiereus in the opinion of Anastasia Turta has painted several more mural ensembles in the region of Epirus: in the churches of St. Mina in Monodendri (1734), of St. Athanasius in Durmani (1736) and of St. Athanasius in Choruda. Georgios Velenis challenges the attribute. The question of the authorship of the frescoes remains open.

All inscriptions on the Rozhen Monastery frescoes are in Greek.

Frescoes from the 16th c. of the facades 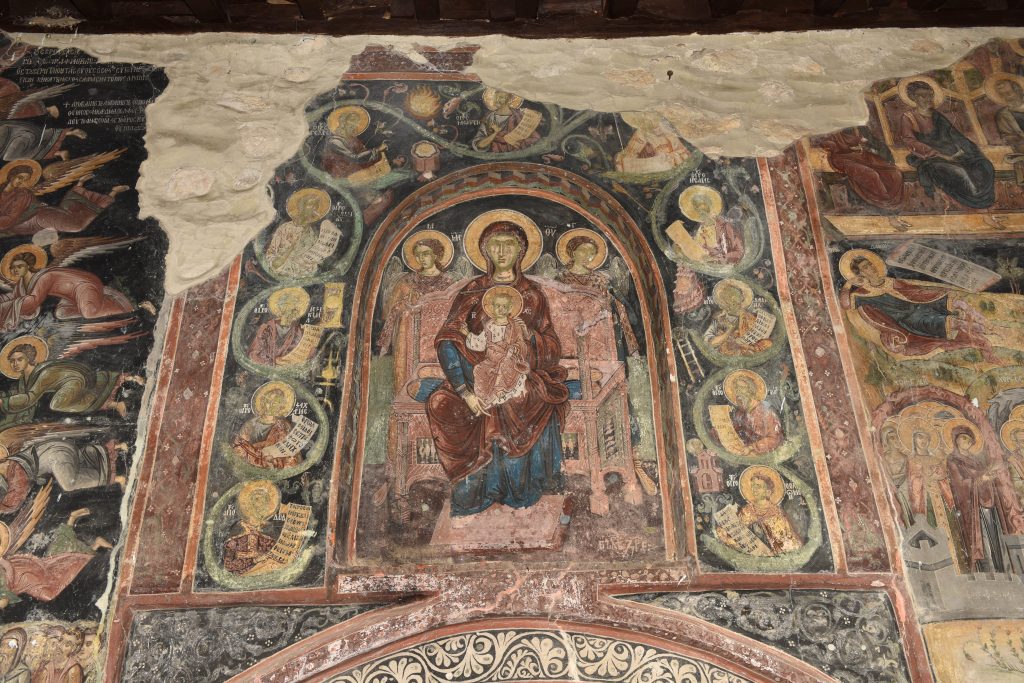 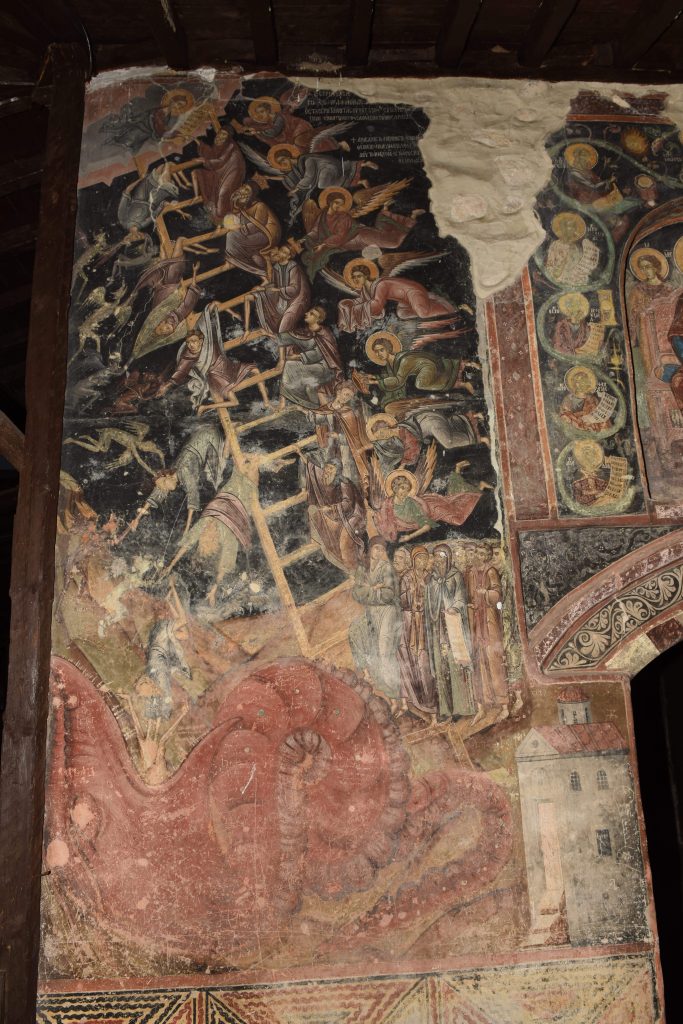 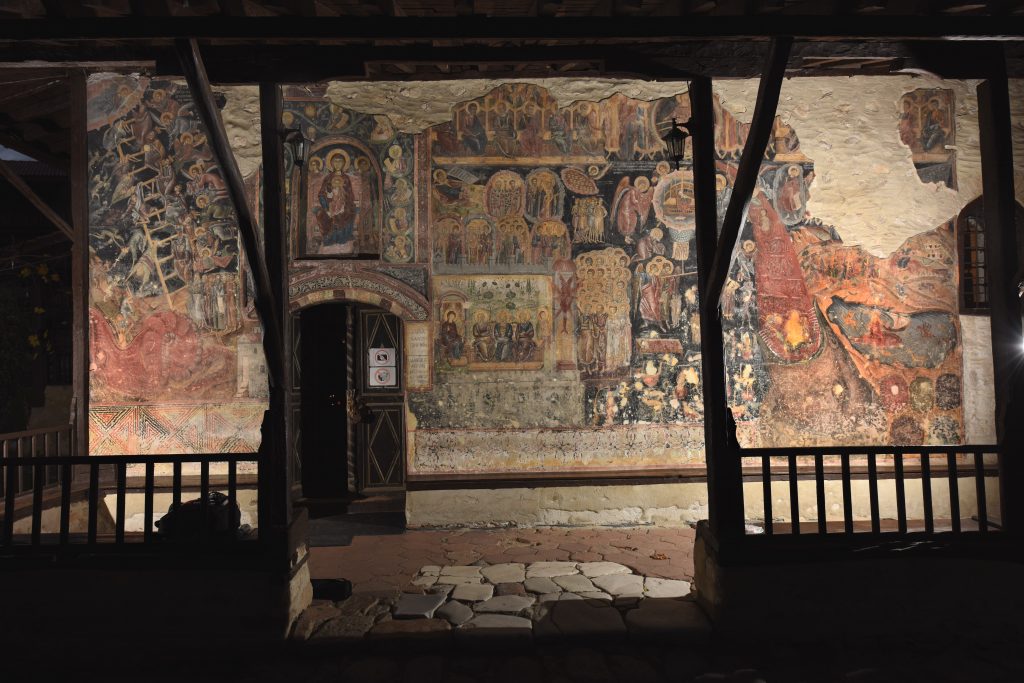 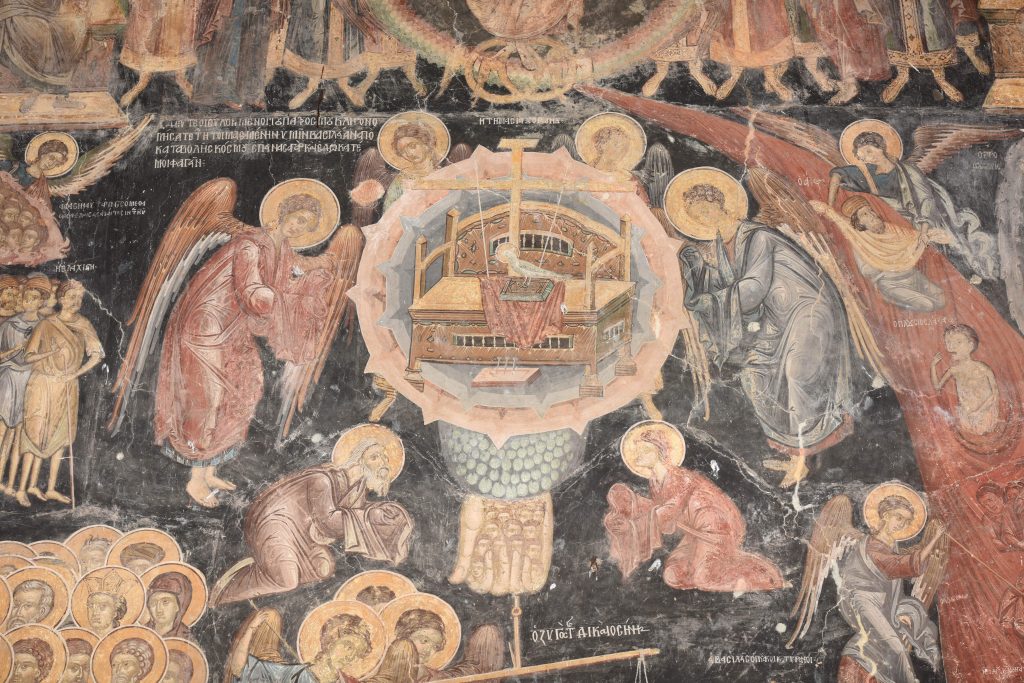 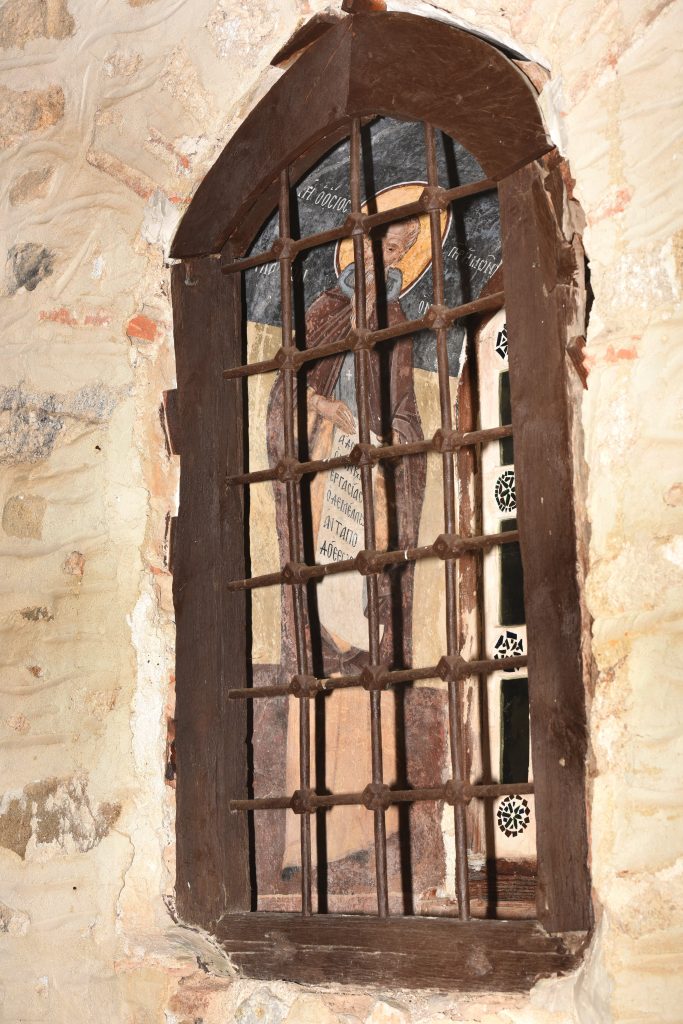 Frescoes from the 16th c. from the nartex 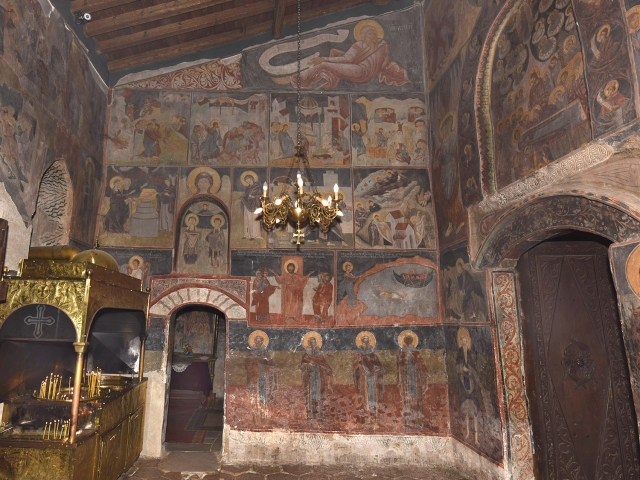 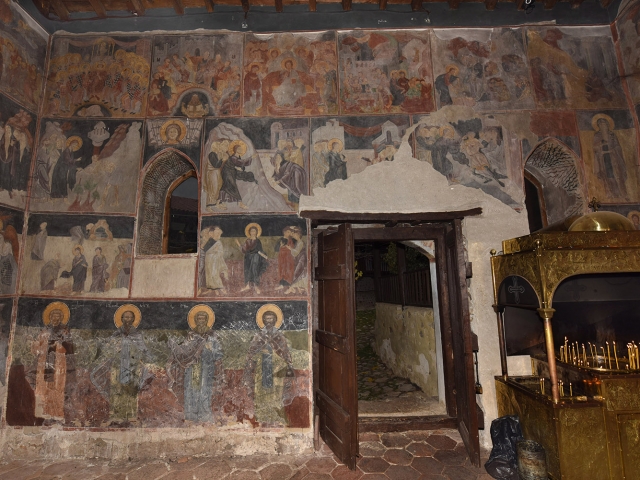 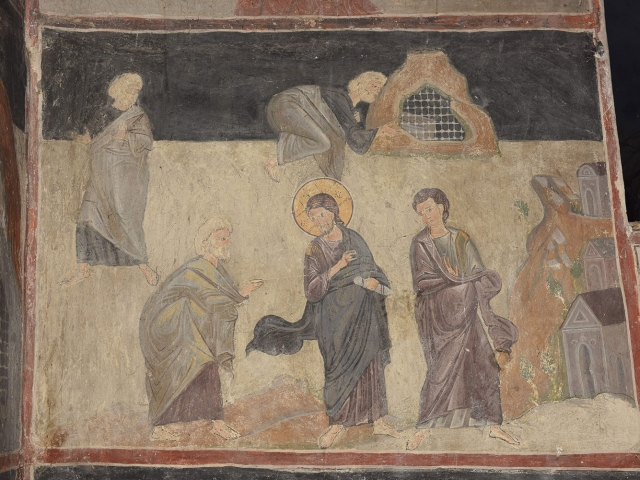 Frescoes from the 16th c. from the refectory 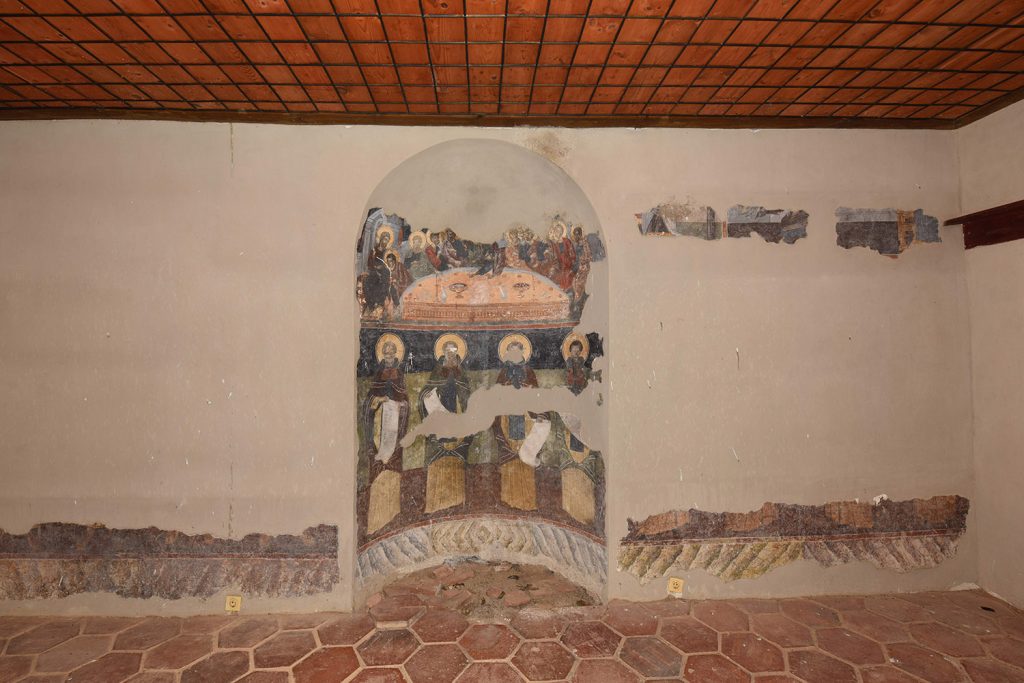 Frescoes from the 18th c. from the naos 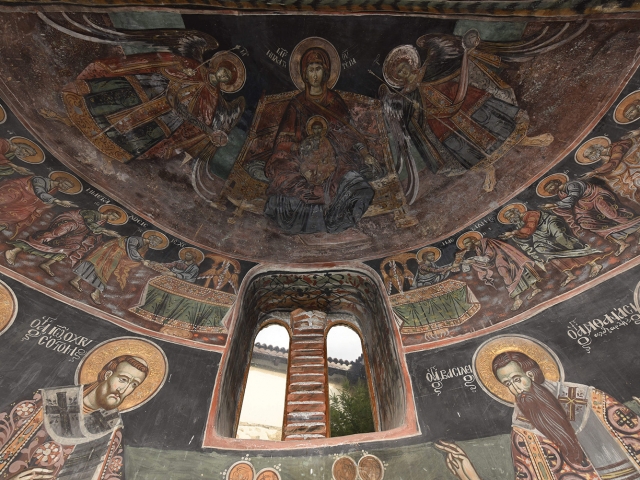 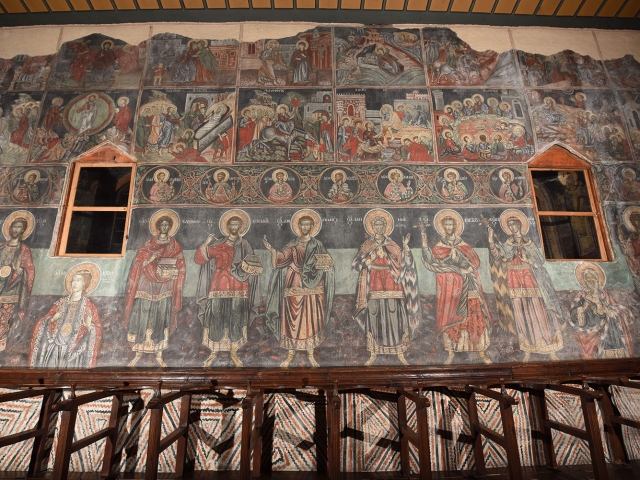 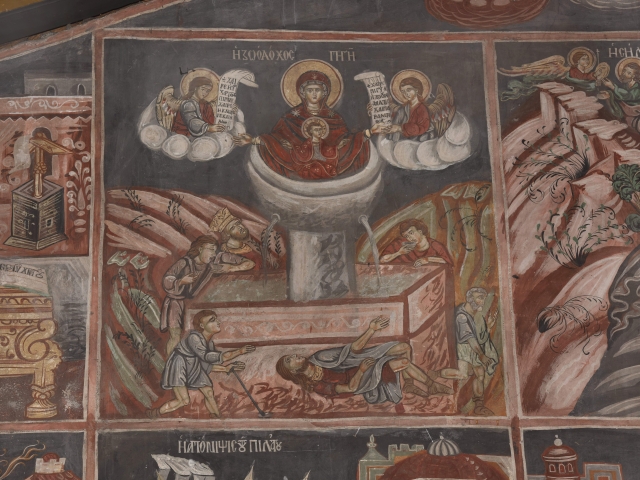 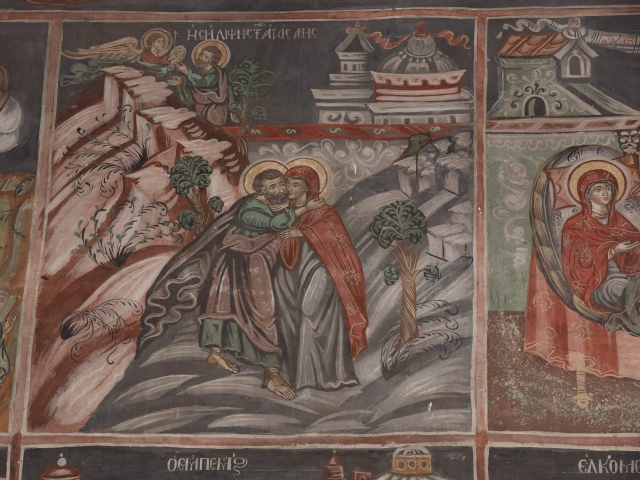 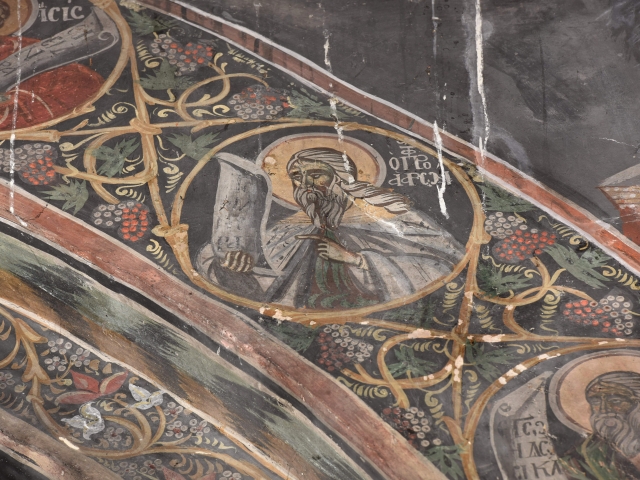 Frescoes from the 18th c. from yhe chapel 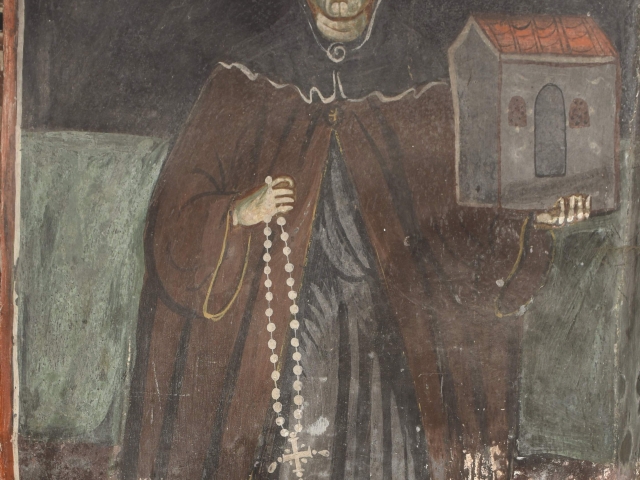 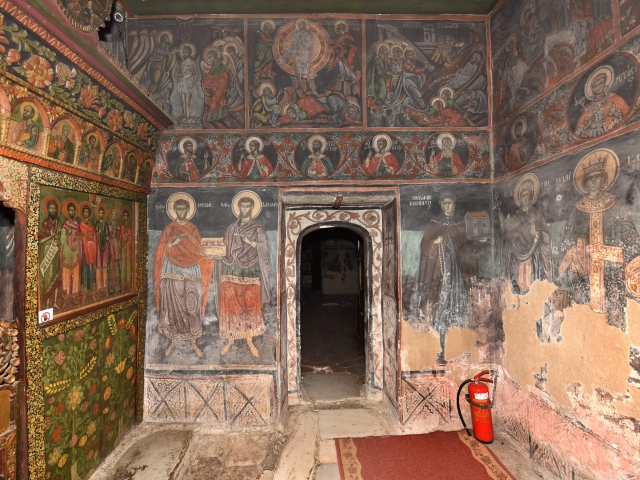