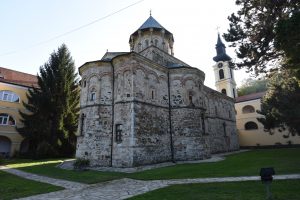 The monastery is situated in the area of Fruška Gora, near the town of Irig. In terms of church administration it belongs to the Eparchy of Srem of the Serb Orthodox Church. Together with the Krušedol Monastery it is one of the most important monasteries among the so-called Fruška Gora monasteries.

Although there is no certain data it is assumed that the monastery was founded in the late 15th century which is evidenced by the archaeological remains of the original church and other monastery buildings. In 1555, the relics of St. Theodore Tyron were moved into the old church of Novo Hopovo, which increased the significance of the monastery among the other monasteries of Fruška Gora. In 1576, Lacko and Marko Jovšić of Gornji Kovin erected the new church of St. Nicholas, one of the most representative churches built in the area from the years after the restoration of the Patriarchate of Peć.

The church of the monastery is linked to the Serbian Moravian tradition. The naos has a triconchal layout with a high dome, a spacious narthex was added from the west. The dome is erected on four solid pillars. The exterior of the church is markedly decorative with a number of peculiarities. The drum of the dome is unique: the twelve-wall drum is surrounded by 12 free standing columns supporting the eaves of the roof. The facades are separated horizontally in two halves by a narrow cornice as in the upper part there are shallow arched niches separated by pilasters. The narthex is almost square, covered by a longitudinal vault. In the upper parts of the four walls there are braids of arched shallow arched niches standing on solid consoles. Originally, there were two entrances: from the north and from the west. The northern entrance was walled up before the narthex was painted and the western entrance was extended later as the surrounding murals were destroyed. 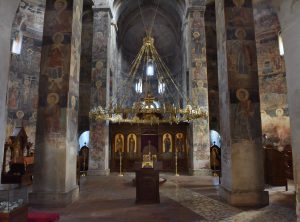 The naos was painted as late as in 1608. In 1654, the narthex was decorated by murals. The paintings in the naos and the narthex are independent in terms of their program, iconography and style.

The murals in the naos were made in 1608 by traveling icon-painters headed by the icon-painter Mitrophan as shown by the ktetor’s inscription which was on the western wall of the naos above the door but was destroyed when it was extended in the 18th century. The imposing dimensions of the church enable the development of a rich mural painting program. It corresponds to the traditional distribution in a cruciform church – Christ Pantocrator in the dome, prophets in the drum, and the Evangelists in the pendentives. In the concha of the apsis there is a monumental depiction of the Holy Mother of God with the infant Jesus on a throne, and underneath: the Communion of the Apostles and the Adoration of the victim. On the walls, in the conches and in the vaults there are numerous scenes from the Christological cycle, scenes from the life of the Holy Mother of God, Old Testament scenes. In the lower registers there are medallion and full-length images of saints. In the iconographic program of the naos some authors see influence from Mount Athos, especially in the presence of scenes such as the Exaltation of the Holy Cross, the Sunday of Orthodoxy, St. Ignatius Theophorus and the lions which are very rare in Serbian monuments.

The narthex was painted almost half a century after the naos. The murals on the ridge of the vault are not preserved. The Martyrdom of the Apostles is depicted on the slopes of the vault. Underneath them, in the arched niches (three on each wall) there are depictions (two in each niche) of the cycle of the Akathist of the Holy Mother of God. In the spaces underneath them there are twelve New Testament compositions illustrating the Sundays of the Pentecostarion. The following register is occupied by 11 depictions of martyrs in medallions on each wall. A belt of standing figures of famous monks follows: 13 on each wall. In the bottom, above a high socle there are full-length depictions of saints: warrior saints and Serbian rulers on the western wall.

Although there are numerous publications about the church and its murals, there is still no opinion regarding the origin of their creators. Vojislav Đurić stated the opinion that before they painted the naos of Novo Hopovo, the icon-painters painted the Katholikon of the Piva Monastery (1604-1606). In the Serbian publications the authorship of the murals in the naos and in the narthex is ascribed to Greek icon-painters who came from Mount Athos. In more recent publications they are associated with the work of the icon-painters from Linotopi and the villages in the Mountain of Grammos. The study of the murals of the main church of the monastery of Novo Hopovo in their entirety is forthcoming.

Frescoes from the naos 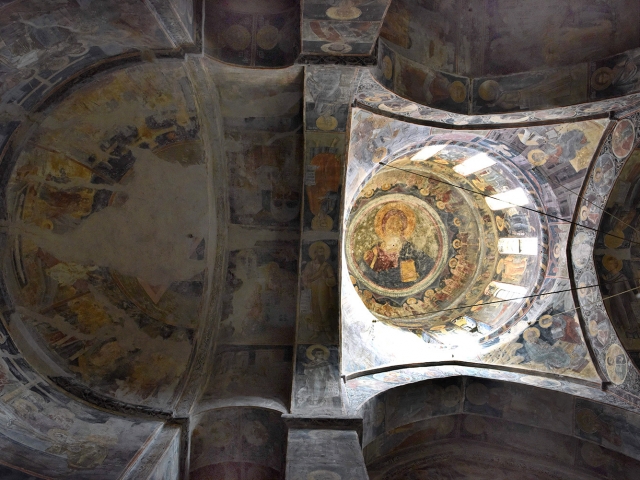 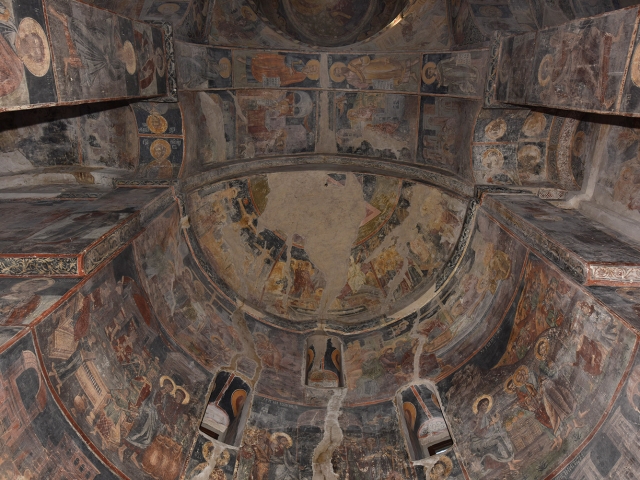 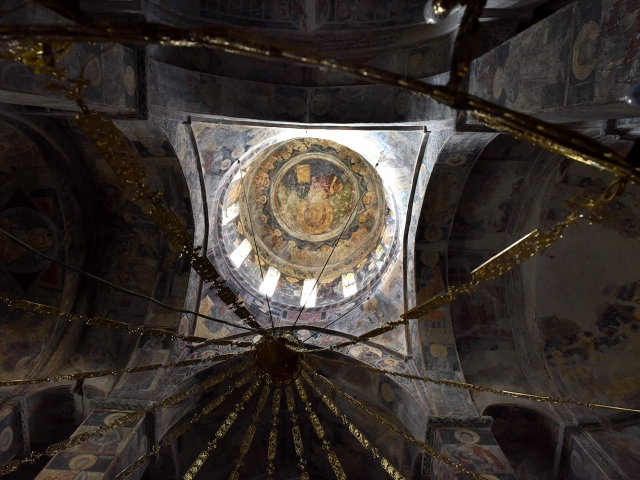 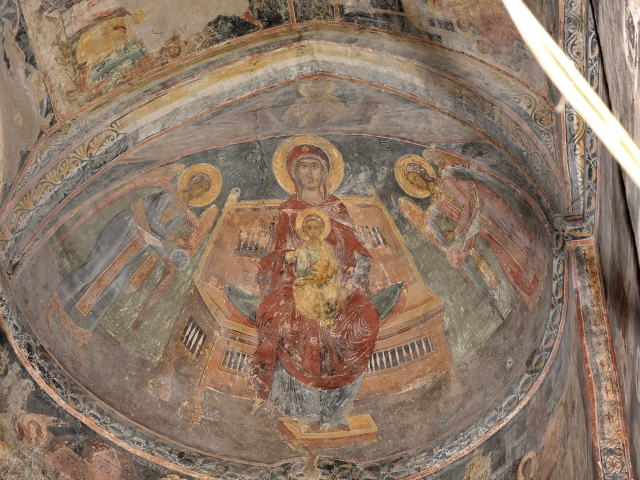 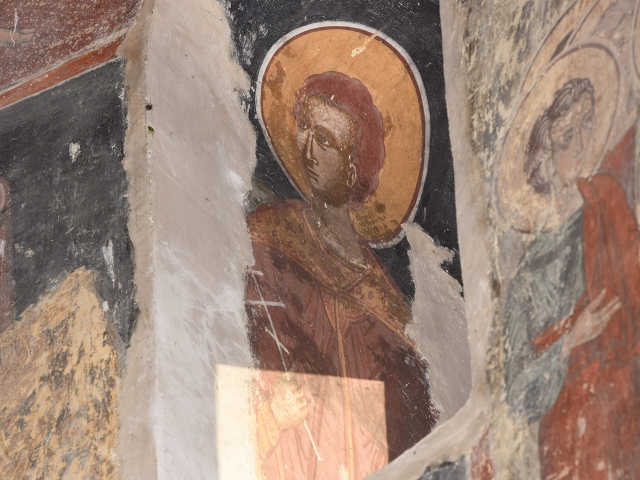 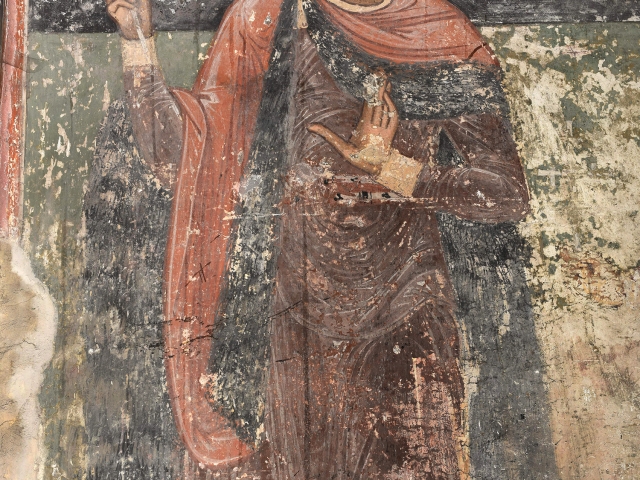 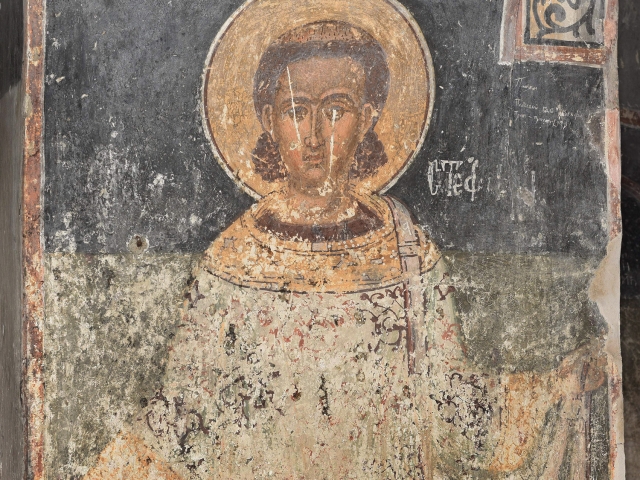 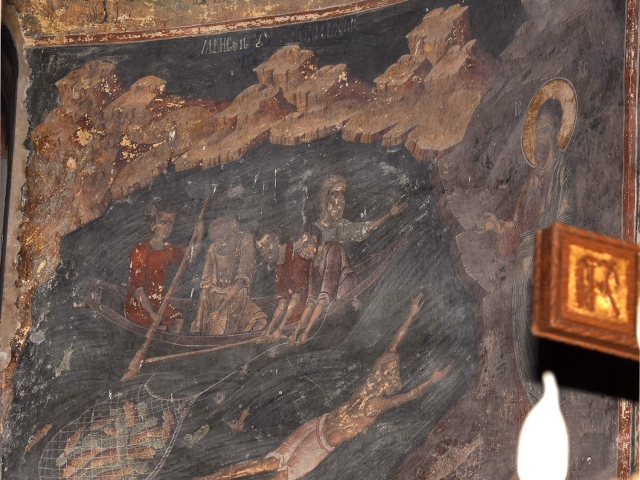 Frescoes from the narthex 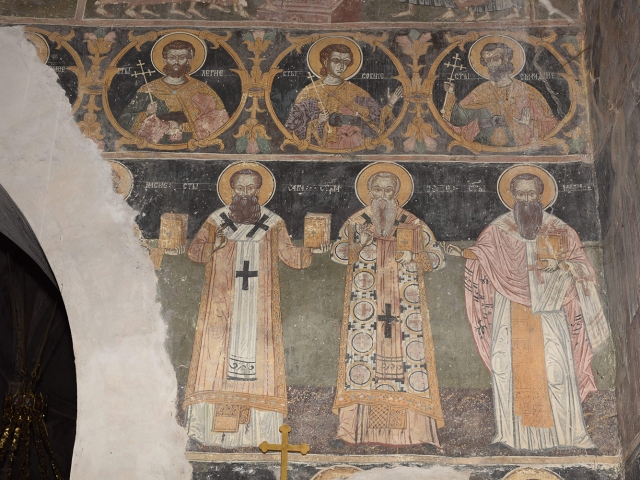 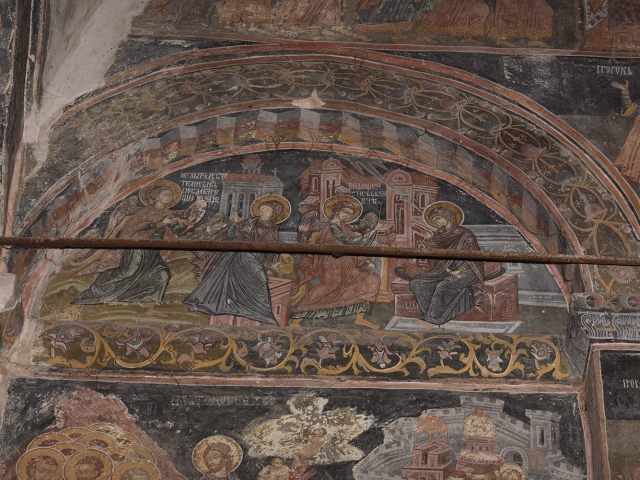