The Orlitsa Cloister is situated at some 2.5 km east from the town of Rila and at 18 km from the Rila Monastery. 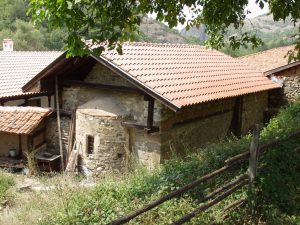 The Church of St. Peter and St. Paul in the nunnery of Orlitsa

The Orlitsa Cloister and its history are directly connected with the Rila Monastery which is one of the foremost Orthodox centers in Bulgaria. Researchers date the establishment of the cloister in the14th c. when protosebastes Hrelyo established the Rila Monastery. Of this bears witness the charter of King Ivan Shishman of 1387, where Orlitsa is mentioned. This suggests that the church might have been built at the same time.

There are two preserved inscriptions in the church that have been causing controversies in scientific circles. The first is on the eastern wall of the narthex and reads that the church was built in 1478-1479. The second, on the western wall of the naos, reads that the church was built under hegumen David and was later decorated with the donation of bishop Jacob under hegumen Theoktist in 1491. The inscriptions haven’t been preserved in their original condition and many corrections have been made in the 19th-20th cc.

Some researchers think that the church of the Holy Apostles Peter and Paul was erected in 1469 when the holy relics of St. John of Rila were translated from Veliko Tarnovo to the Rila Monastery. The extant commemorative inscription mentioning the year 1478 makes another part of the scholars suggest that the building was constructed in 1469 and that some repair works have taken place in 1478.

Recent research shows that in 1478 the church was partially painted and not rebuilt. This statement is based on a Greek version of the inscription preserved in the correspondence of Neophyte of Rila. According to this testimony the inscription from the eastern wall of the narthex which dates the construction of the church in 1478 was corrected in the first half of the 20th c. The second inscription from the western wall of the naos shows that in 1491 the church of the Holy Apostles Peter and Paul was completely decorated. Over the next centuries the Orlitsa Cloister was reconstructed several times to reach its present state. In 1862, an open narthika was built to the church and a balcony was added to the kitchen. In 1863 Nikola Obrazopisov decorated completely the eastern and the northern walls of the narthex and partially the lower registers of the eastern and the western walls in the naos.

The extant historical evidence shows that in the 19th-20th cc, the cloister was much smaller than today’s buildings. In that period it comprised a kitchen, a nun’s wing, a small yard and a church.

The building belongs to the most popular architectural type of the period – a small  single nave church with one apse (nave 3.80 m, height 3.60 m). In 1862 an open narthex was added to the church.

The 15th c. frescoes are preserved on the eastern and the western walls. They are widely covered by a later painting layer from the National Revival period (1863).

The extant compositions are eight, situated on the eastern and the western walls of the church. On the eastern wall are the scenes of Pentecost, The Disbelief of Thomas, and Annunciation. The Annunciation composition is presented in line with the traditions in Orthodox art on the two flanks of the apse – on the northern side is depicted Archangel Gabriel and on the southern – the figure of the Virgin. In the apse concha are depicted Theotokos Oranta, Archangel Michael and Archangel Gabriel and the lowest register features the Great Fathers of the Church St. Cyril of Alexandria, St. Gregory Theologos, St. John Chrysostom, St. Nicholas, St. Anastasios the Great and unknown saint, whose figures constitute the Adoration of the Sacrifice composition.

The rest of the extant compositions are on the western wall – the Ascension of Christ, the Dormition of the Virgin and the Transfiguration.

The last research of the surviving painting fragments reveals that by all probability the icon-painters who painted the frescoes in the Orlitsa Cloister had known methods similar to those in the Monastery of St. Prohor of Pčinja (Serbia, 1488/9), the Dormition Church, of the Mislovshtitsa Monastery (Bulgaria, end of 15th – beginning of 16th cc.) and St. Nicholas Church in the Monastery of Gornyak (Serbia, ca. 1490).

Unfortunately, the frescoes in the abovelisted monuments are only preserved partially which hinders a complete comparative analysis of iconography and style. Therefore we are going to present a couple of typical examples from the extant scenes and figures which are an eloquent testimony of the connection between the icon-painters.

Besides the listed examples and their common iconographic and stylistic characteristics, we could also note the approach to the construction of the figures and the faces, as well as the execution of the background.

In all four churches the style of different icon-painting teams is discernible which probably accounts for the common iconographic features but also for the stylistic differences in the visualization of the text of the Gospel.

The above listed examples illustrate the most distinctive iconographic and style similarities in the monuments in question but at the same time they present numerous differences as well. These lie in the selection of the compositions, in the construction of some of the figures, in the inscriptions describing the scenes and in the texts on the scrolls.

Today the church and the rest of the buildings of Orlitsa Cloister are in a good condition. We have testimonies of a couple of reconstructions of the temple. The first refers to 1862-1863 when the vault and the roof construction were replaced. The restoration of the church began as early as in the 1950s and took place in several stages. In 1958 the frescoes were studied by experts from the national Institute for the Monuments of Culture and by Polish experts L. Torwirt, W. Domaslowski, A. Torwirt.

In 1983, restorer Ivan Ivanov made a project for an overall restoration of the church. The project included cleaning the extant paintings and removing the paintings from the National Revival Period. The conducted research showed that the early paintings from the eastern wall of the narthex are entirely preserved. A partial cleaning of the paintings has been carried out but to this date no complete restoration of the church has been done. 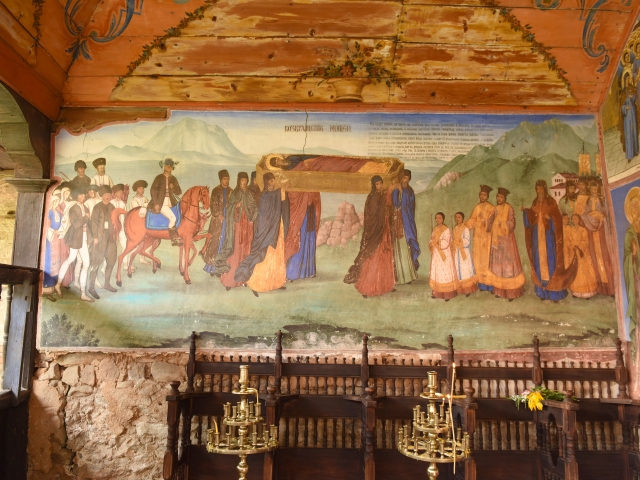