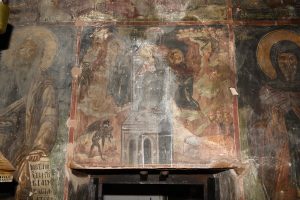 The Temptation of Christ

A small, one-nave, one-apsis church with a two-sloped roof. Later, a covered gallery was added to the naos from the south and the west.

Frescoes dating from different times are preserved on the western and southern facades: the earliest of them date to the 15th century. The 16th-century murals are located in the altar and the naos. The ktetor’s inscription located above the patron niche with the image of the Virgin with the Christ Child on the southern wall in front of the iconostasis indicates the year when the church was renovated (1553) and the ktetor’s name: a layman unknown from other sources (the inscription and the image have been painted over). The frescoes have been attributed to Frangos Katelanos.

The murals in the sanctuary contain the themes common for this part of the church. In the naos the program is allocated into three registers. According to G. Gounaris in the uppermost area on the southern and northern walls probably there was a register with the images of the prophets, which is not preserved. The upper part of the compositions in the next register representing the cycle of the Great Feasts (with the addition of the scene of the Massacre of the Innocents) is also destroyed. There are some scenes of the Passion of Christ represented underneath the Crucifixion on the western wall. Full-length saints are depicted in the lowermost area. These are figures of monks on the southern wall and of warriors on the northern wall. This register is interrupted above the southern and the western entrances by the scenes of the Temptation of Christ and Peter’s Denial, respectively. 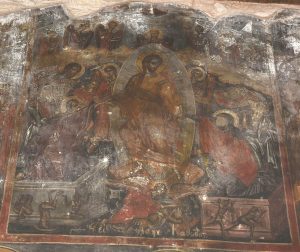 The Descent into Hell

The compositions of the hymn to the Theotokos ‘All of Creation Rejoices in Thee’, the Baptism of Jesus and the image of St. Simeon Stylites are preserved (the images have been partially painted over) on the western facade of the initial structure.