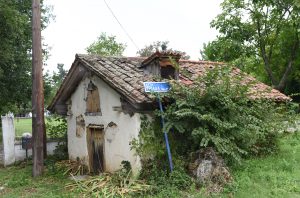 The church of St. Athanasius in Koustochori, view from the southwest

The church is located in the village of Koustochori, some 15 km northwest from the town of Veroia in Imathia, Northern Greece.

There are no historical records about the monument.

The church is small, with a single nave, without a narthex, and is built in rubble masonry. The external size of the building is 5.15 m to 3.5 m. On the eastern wall there is an apse and small prothesis niche. The dome is not preserved but judging from the absence of scenes from the Great Feasts cycle on the southern and northern walls which top parts have been destroyed we could assume that these compositions, mandatory for the mural decoration of post-Byzantine monuments, were situated on the original vault.

The partially surviving frescoes occupy two registers on the four walls of the church. Under the new plaster coat covering the western facade can be seen fragments from mural painting, but only the image of St. Athanasius in the patron niche can be identified.

The painting is largely dated according to its stylistic and iconographic marks to the last quarter of the 15th c. (Flora Karagianni) and the early 16th c. (Thanassios Papazotos). It doesn’t belong to the representative works of the Kastoria artists of the last quarter of the 15th c. and there are several orthographic mistakes in the inscriptions. Therefore we think that the paintings should be referred to a later stage of the development of the Kastoria artistic circle, which comprises the early 16th c. and ends around the end of the 1530s.

In the apse there is a depiction of Theotokos and Child (in the concha) and Officiating Church Fathers with St. John Chrysostom and St. Athanasius of Alexandria, who was by all probability included in this reduced composition because of the church’s dedication. Noteworthy is also the representation on both sides of the apse window of Christ Sacrifice on a discos to the north and in a chalice to the south. In the prothesis niche is depicted St. Stephan, at the southern side of the apse – an unidentified deacon and above the apse – fragments of a scene of Transfiguration.

The southern and the northern walls are occupied by two registers separated by a band with ornaments. The lower zones include standing figures of saints and the upper – images of saints in medallions with floral motifs in the background. On the second register of the southern wall can be identified the images in medallions of St. Pantaleon, St. Cosmas and St. Damian, and on the northern wall – only of St. Petka. The first zone on the southern wall features the standing figures of an unknown bishop, St. Athanasius of Alexandria, Archangel Michael, St. George of Cappadocia, and St. Demetrius Great Chieftain, where the warrior saints are depicted in aristocratic attire. On the northern wall prevail the figures of women saints –St. Marina, St. Varvara, St. Kyriaki, and St. John the Baptist. 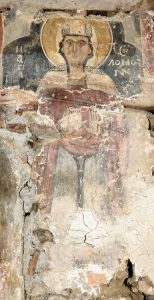 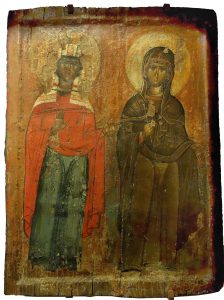 Icon of St. Varvara and St. Petka, Veria (the last quarter of the 15th century)

In the upper register on the western wall stands the composition of Dormition of the Virgin but the choice of the depictions in the first zone is less traditional. Instead of the figures of Archangel Michael and St. Constantine and St. Helena which typically occupy this space, here are presented St. Anthony the New (of Veria) – a local saint, and St. Solomonia, mother of the seven holy Maccabean martyrs.

The iconographic and stylistic elements – the ornament, separating the frieze with the medallions from the lower register, the depiction of the standing saints under the arches, the images of the warrior saints in aristocratic clothing – rank the frescoes in St. Athanasius in Koustochori among the works of the Kastoria artistic circle of the 15th-16th cc. Close parallels of the painting in question can be found in the murals in St. Theodore Tyron and St. Theodore Stratelates in Servia (Northern Greece, 1497 or 1512 according to the different reading of the badly preserved inscription in the prothesis niche) and in part of the paintings in the Holy Savior church near the Monastery of Chebren (Republic of Macedonia, 1532/1533). In terms of iconography and style the painting in Koustochori is related with the murals and icons of the local atelier of the end of the 15th – first decades of the 16th c. working in Veria. 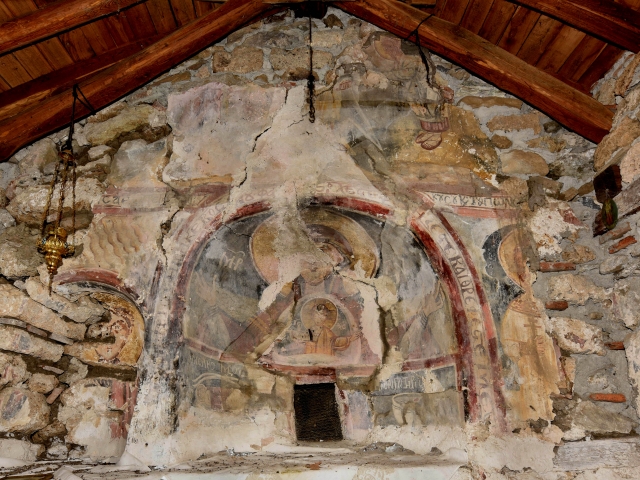 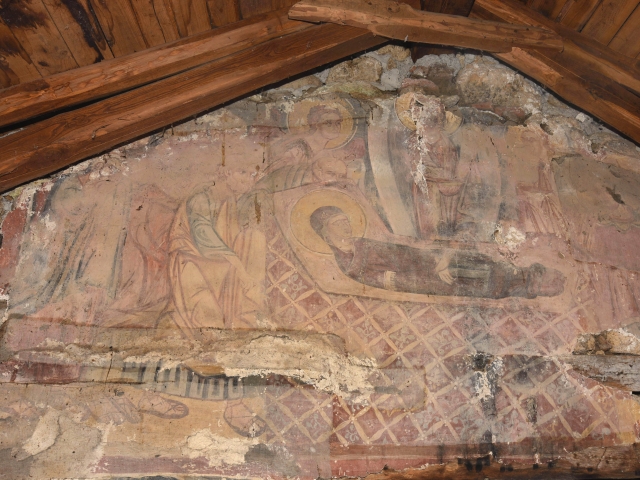 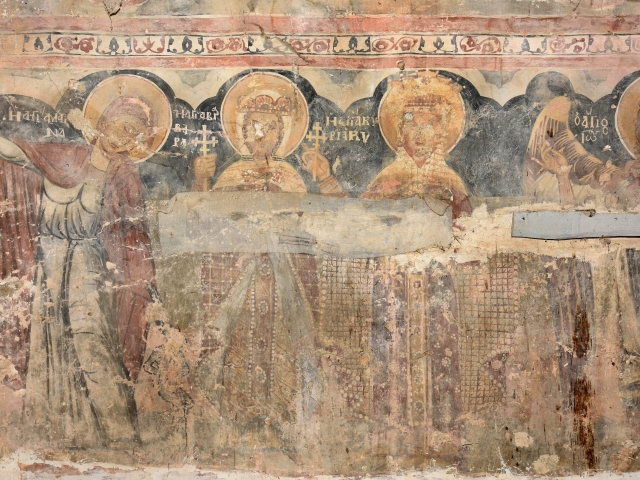 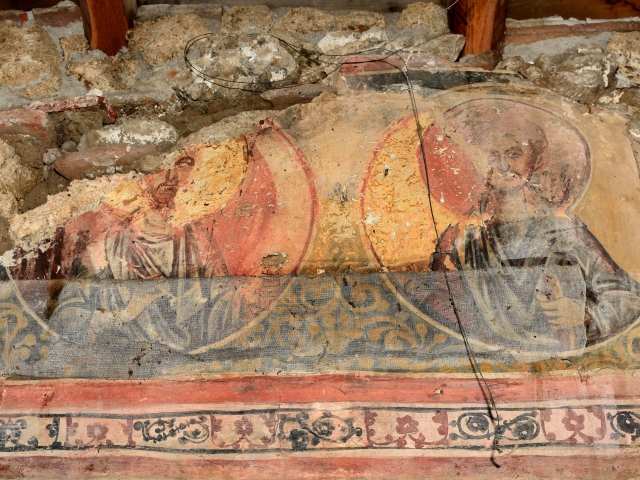 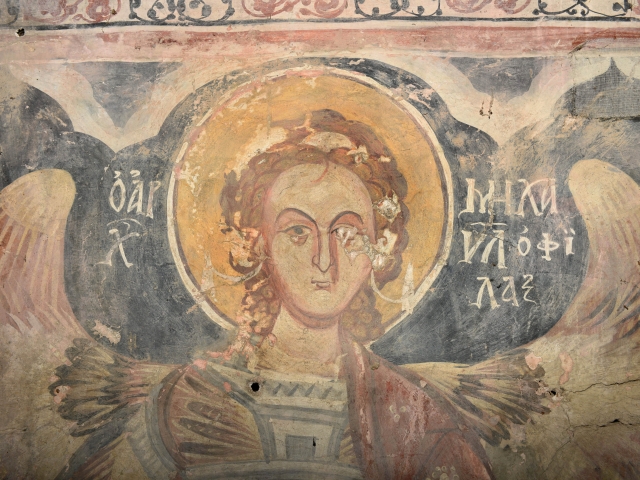 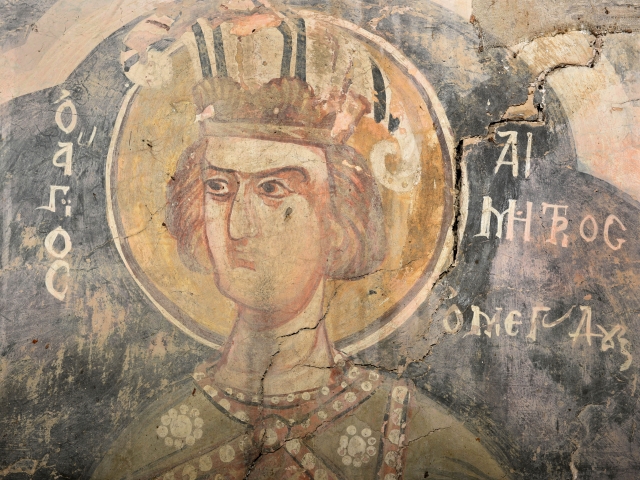 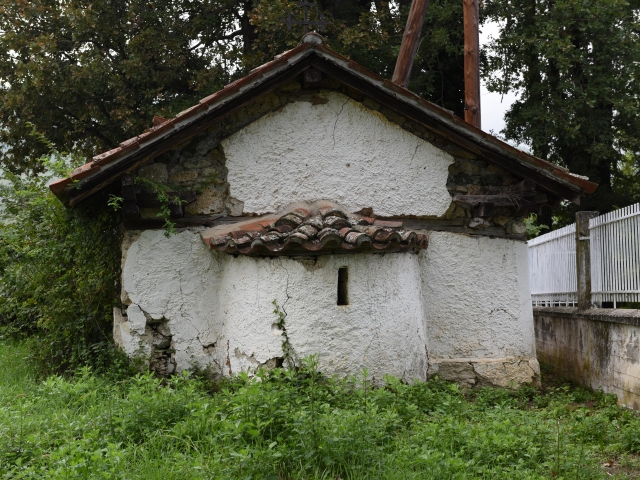