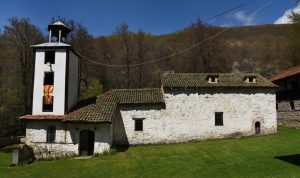 View to the southern façade

The Monastery of Slimnitsa is located in Baba Mountain. It stands on the northeast shore of Prespa Lake, at some 45 km from the town of Bitola and at 4 km north from the village of Slimnitsa. A well-asphalted road leads from the lake to the church revealing a wonderful view on the lake and the surrounding mountains.

Historical evidence about the monastery church is found in the donor’s inscriptions on the temple walls. The donor’s inscription above the entrance on the western wall of the naos reads that the temple was built and decorated in 1606/7 under hegumen hieromonk Nicanorus and the Prespa Bishop Matthew. One of the main donors of the church was Michail Petkov from Bitola. The great contribution he made for the construction and the decoration of the church gave him the right to place the portrait of his late son Kupen in the altar.

Another donor’s inscription, located on the western wall of the narthex, testifies that this part of the temple was decorated thanks to the efforts of the monastery brethren in 1612. Two years later, another icon-painting atelier worked on the western façade of the church. The team was headed by icon-painter Nikola, who left his signature at the bottom of the patron image of Theotokos with Child. In 1644/5 part of the mural decoration on the façade was covered with new painting. In the 19th c. an open exonarthex was added to the façade and left undecorated. The belfry dated from the same period. The fires raging during the World Wars destroyed the monastery buildings around the church. 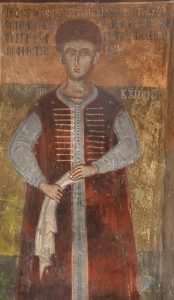 The portrait of Kupen – son of the donor Michael

The naos of the church, built in 1606/7 is a single nave, one apse building with a barrel vault. It is built by rubble and mortar. On the eastern façade there is a protruding five-wall apse with independent covering. The interior was lit by means of a couple of windows on the eastern and the southern walls, the western façade of the naos also had two windows which were later walled up when the narthex was added to the building. The altar space is segmented by an altar apse and two niches in the eastern wall, functioning as prosthesis and diaconicon. An interesting decision is the presence of a small door on the southern wall in the altar. The massive dome of the naos is supported by four pilasters standing along the southern and the northern walls. The pilasters are connected with relatively deep arches forming blind niches (two in the altar and four in the naos).

In 1612 a not very big narthex was added to the naos. The change in the terrain level was compensated with a high step. The door separating the narthex and the naos is preserved. This part of the temple is also covered by a barrel vault and has a window facing south. A patron niche was built on the western façade of the narthex.

In the 19th c. to the west of the narthex were added an exonarthex, wider than the main building, and a belfry.

The program of the naos follows the model of decoration of the small single nave barrel vault churches. In the zenith of the vault in medallions are depicted Christ Angel of the Great Council, Christ Emmanuel, Pantocrator, and Theotokos Oranta. Right beneath them from the south and from the north stand images of prophets.

The frescoes in the altar apse

In the altar apse concha is presented in half-length Theotokos Wider than Heaven, surrounded by the archangels. In the lower zone the images of several saints bishops form a medallion frieze and underneath stands the Adoration of the Sacrifice composition. On the flanks of the apse are depicted the hymnographers St. John Damascene and St. Cosmas of Maiuma holding scrolls.

In the prosthesis niche is represented archdeacon Stephan and in the diaconicon niche – St. Roman the Melodist. In the niche of the northern wall is the Vision of St. Peter of Alexandria. Next to it is the figure of the boy Kupen, the deceased son of one of the main donors, Michail from Bitola.

The highest register in the naos and part of the zone below it are dedicated to the scenes of the Great Feasts, complemented with a couple of compositions of the Passion of Christ. Almost the entire western wall is occupied by a large-scale composition of Dormition of Theotokos. In the next register, in the altar and right in front of the iconostasis are situated scenes of the feasts after the Pentecostarion and from the cycle of the post-Resurrection appearances of Christ. The lowest zone of the naos is divided by four arched niches with full-length figures of saints – healers, prominent representatives of the monastic community and ascetics, warrior saints. Especially interesting in the last group is the image of St. Nicholas the New. The front part of the western pilasters is occupied by the images of Apostles Peter and Paul. Flanking the entrance on the western wall according to tradition, under the donor’s inscription, are presented Archangel Michael, St. Constantine and St. Helena.

In the window niche on the southern wall is depicted the scene of St. Sisoes before the Tomb of Alexander the Great.

Quite expectedly the decoration of 1612 uses the Theotokos theme. In the vault stands the composition In Thee Rejoyce and next to it in a medallion is depicted the Ancient of Days denoted as Sabaoth Invisible. The two upper registers beneath them are occupied by twenty-four scenes corresponding to the stanzas of the Akathist hymn, dedicated to the Theotokos. On the western wall, again linked to the Theotokos theme, are depicted the scenes of the Ladder of Jacob and Jacob’s Wrestling with the Angel, Theotokos Unburnable Bush, the Three Jewish Men in the Fiery Furnace.

The Judgment of Pilat

Under this composition there is a tier of busts of prophets. The lowest zone, reserved for the full-length figures of saints, starts to the south of the door on the eastern wall with the Deeisis composition. Among the prevailing number of images of reverend monks stands out the group of the Holy Seven Saints: Angelarius, Gorazd, Clement, Cyril, Methodius, Naum, and Sava, which is the earliest group representation of the Balkan saints. More images are to be found in the sides of the window on the southern wall. There are depicted St. Zosimas and St. Mary of Egypt and in the depth of the door to the exonarthex – St. Marina and St. Ignatius Theophorus.

In 1618 on the western façade, today’s eastern wall of the exonarthex, in the patron niche was depicted Theotokos Enthroned. The rest of the wall was occupied by a composition of the Last Judgement. In 1644/6, south of the entrance, over some of the older mural paintings, a Royal Deeisis was added with the figures of Apostles Peter and Paul.

Most of the inscriptions are Cyrillic. Together with the inscriptions in Dobarsko and Seslavtsi they show common paleographic and linguistic features which leads to the conclusion that the writers/icon-painters were part of one common team. On aseveral occasions the images are signed in Greek and there the handwriting is different.

Four teams of icon-painters have worked on the decoration of the temple within the first half of the 17th c. The leading scholar studying the frescoes, the Macedonian art history expert V. Popovska-Korobar, believes that the master who made some of the murals in the naos (the full-length figures of St. Demetrius, Christ Pantocrator, etc.) and the painting on the iconostasis, has continued his work six years later in the narthex but in a team with another icon-painter, different from his coworker in the naos. In the narthex he drew the figures of the Theotokos and St. John the Forerunner, St. Nicholas, etc. in the lowest register. It is the same icon-painter that Popovska-Korobar believes has worked in the churches of Dobarsko and the Monastery of Seslavtsi and he, she thinks, is the linking element with the so-called atelier of St. Pimen of Zograph. She ascribes to him the images of the Theotokos in the apse and of some of the bishops in the altar of the Dragalevtsi Monastery and in the church of the Kurilo Monastery – the image of St. Nickolas in the western wall niche, etc. In her last work the author suggests that the artists who made these and other painting decorations could not be identifies with the atelier of Pimen of Zograph and defines them as Kastoria masters.

Another hypothesis regarding the Slimnitsa frescoes is suggested by Donka Bardzhieva-Traikovska, who believes that the personality of Pimen of Zograph could be identified with the chief master from the naos whose work however didn’t continue in the narthex. She presumes that Pimen used to train icon-painters without participating personally in the churches’ decoration (with the exception of the naos of Slimnitsa) and acted as an organizer of icon-painting teams when a certain church had to be decorated.

We find the closest parallels of the Slimnitsa naos frescoes (1606/7) in the frescoes from the Theotokos Church of Archon Apostolaki in Kastoria (1605/6). Their donor was Archon Apostoli Dimitriu Rali who came from a famous family who played an important role in the history of the town throughout the 17th c. Certain similarity is also shown by the more recent frescoes in the churches of Dobarsko (1614) and those in the Monastery of Seslavtsi (1616), but their lower quality of execution suggests that they were painted by a different group of icon-painters than the one in the Simnitsa naos.

In general, the frescoes can be attributed to the atelier that painted the naoses in the monasteries of Piva and Novo Hopovo in Serbia, whose origin could be sought in the lands of Northern or Central Greece.

After we examined the frescoes we came to the conclusion that in the naos and in the narthex have worked different icon-painters and that the quality of the frescoes in the narthex is significantly lower than in the naos. The similarity of the murals from the Slimnitsa narthex with the frescos in the naos of St. George Church in Veliko Tarnovo exists only as far as these two examples of mural decoration fit in the prolific artistic production of the abovementioned atelier. 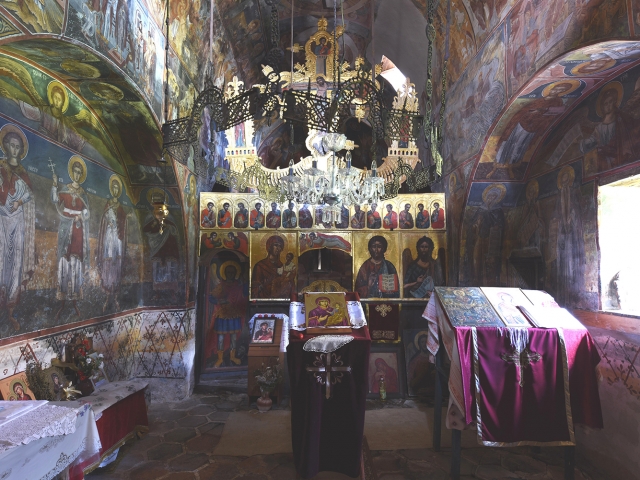 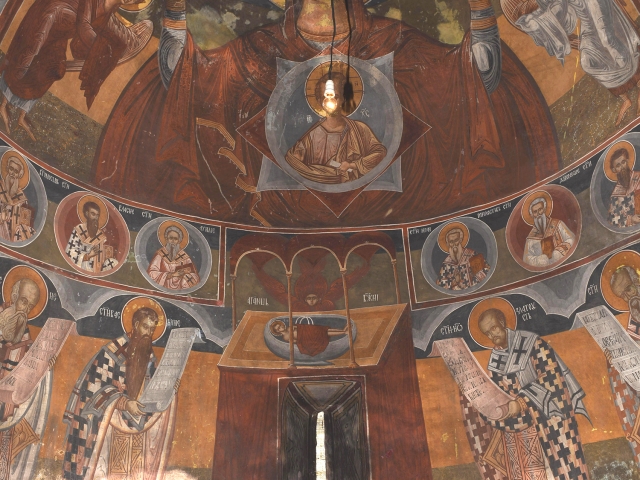 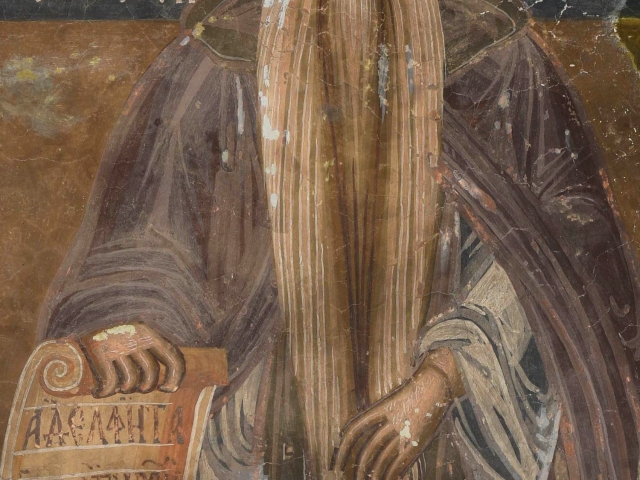 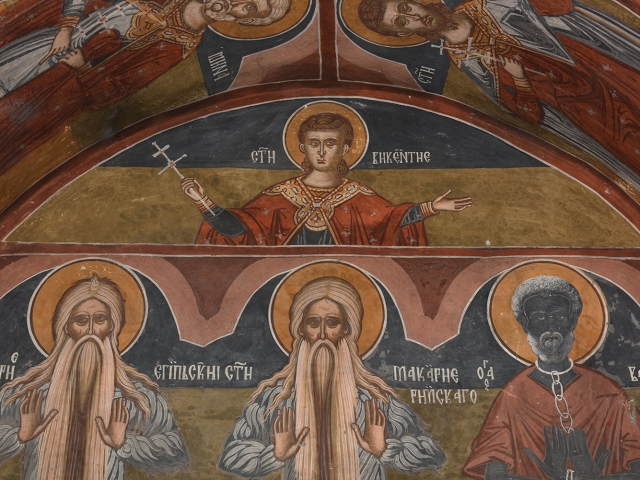 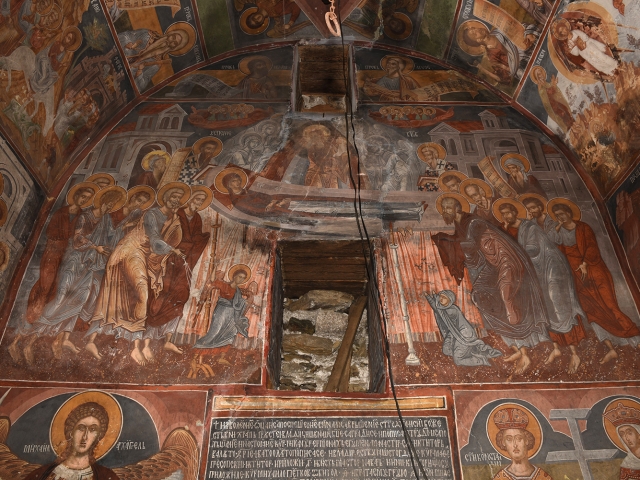 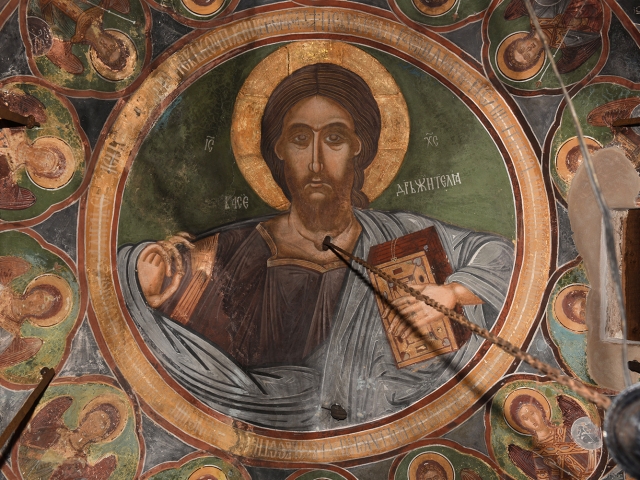 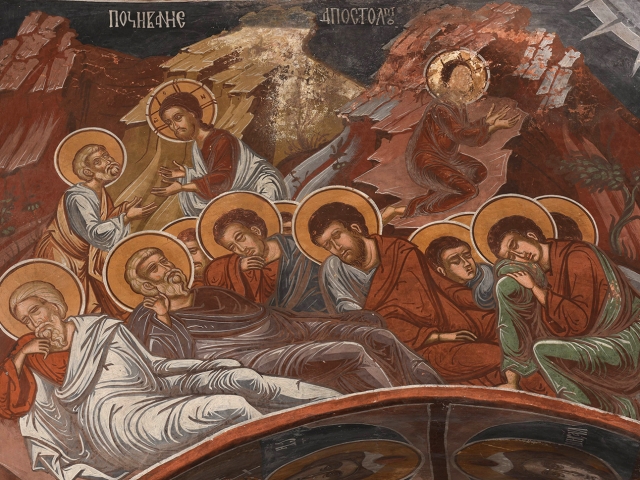 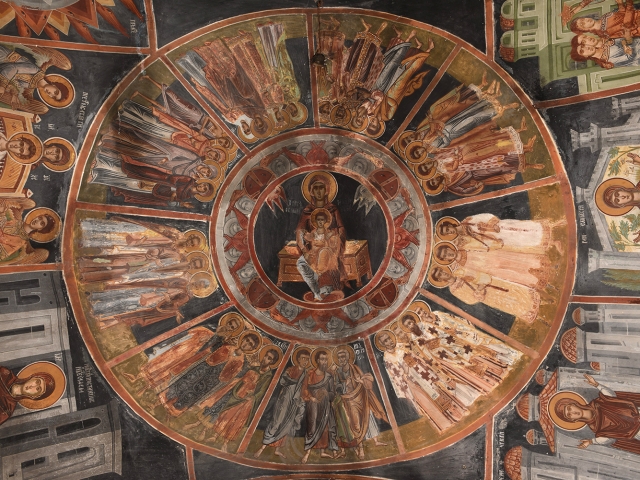 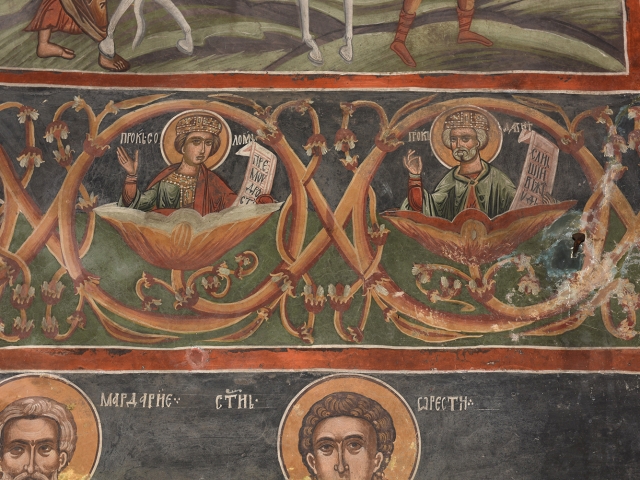 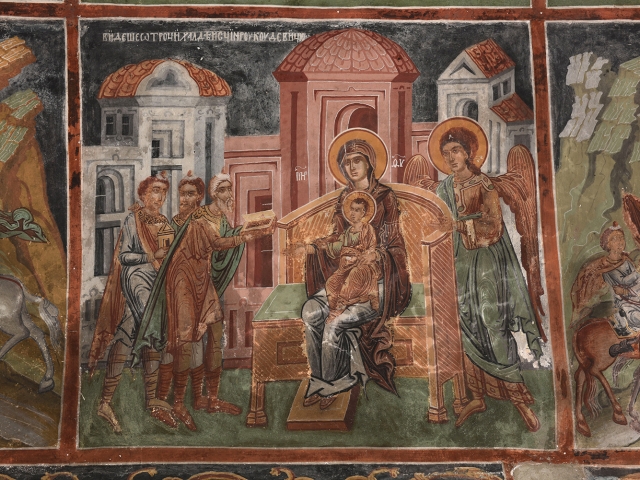 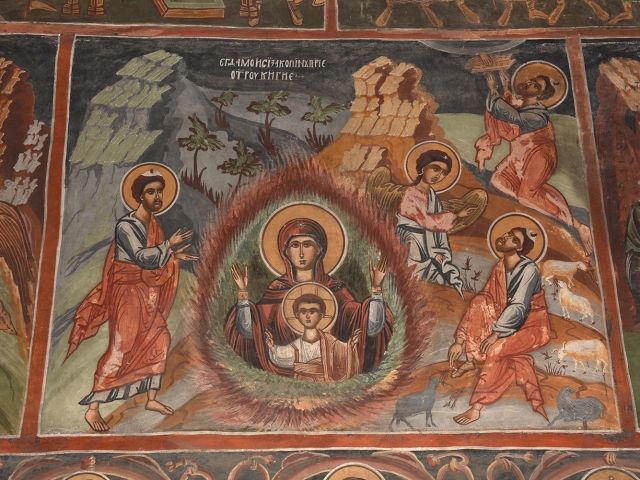 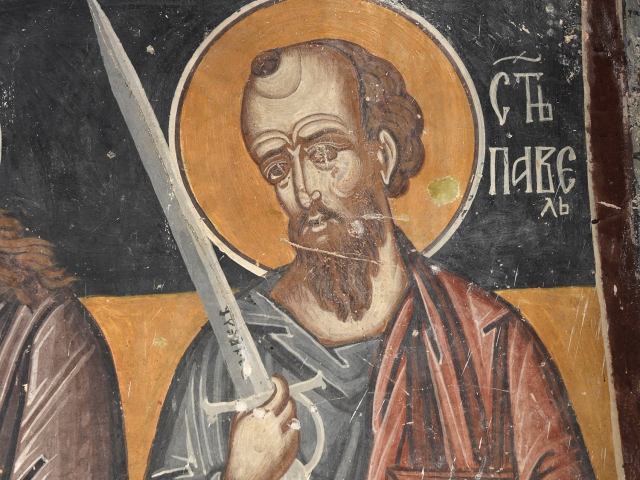 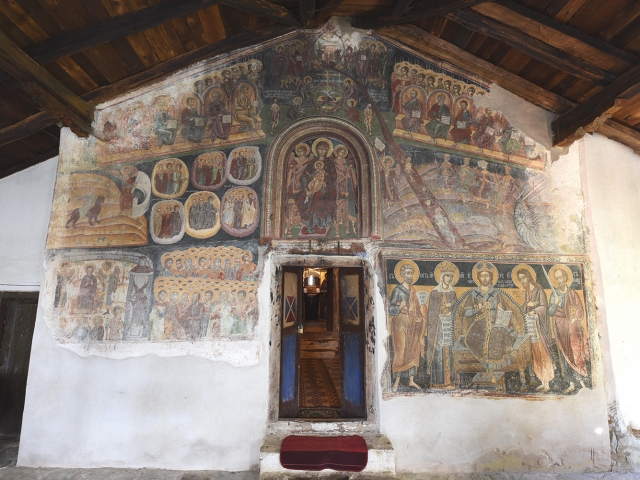 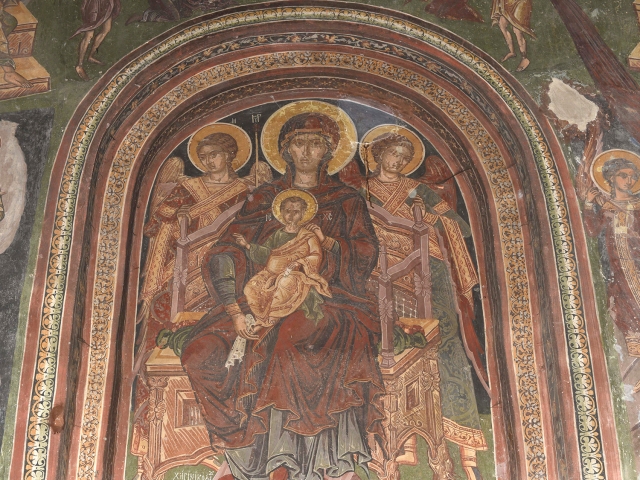 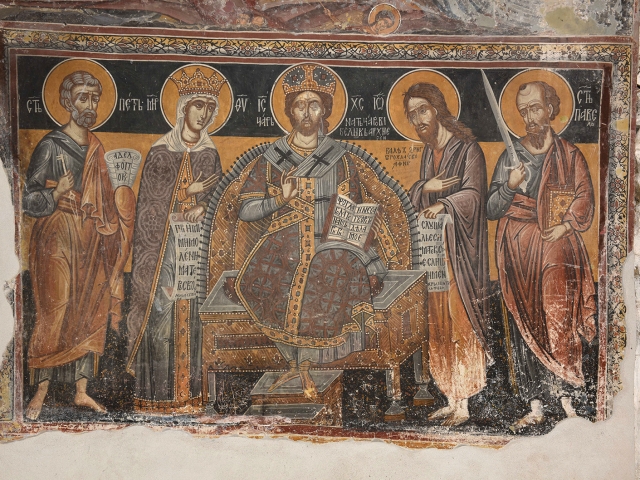