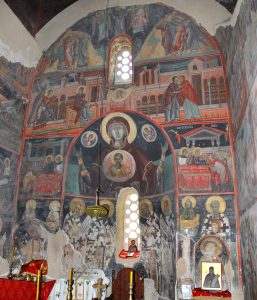 In the 15th and 16th centuries Kratovo is one of the big commercial centers of the Ottoman Empire which contributed to its transformation into an attractive center for a number of men of letters and clerics. The reason for that is the political and economic development of the region, on the one hand, and, on the other, the proximity to Serbia which was still an independent state until the middle of the 15th century. During the entire period Kratovo’s contacts with other important and strategic cities in the empire were also influential. An example for that is Sofia, a city with which Kratovo traders and men of letters maintained close contacts. Local feudal lords who developed the artistic and literary activity in the region by their donations are another important factor. During the epoch close contacts were maintained with Mount Athos monasteries a place storing rich libraries and an attractive spot for aristocrats, icon-painters and men of letters over the entire post-Byzantine period. All of these direct and indirect testimonies support the hypothesis that Kratovo was one of the big economic centers on the Balkans in the second half of 15th and in 16th centuries where favorable conditions were established for the artistic realization of men of letters and artists.

Was Kratovo an artistic center? Which monuments were made by the icon-painters who had received their artistic skills there? These questions are part of an interesting and much discussed topic.

The thesis for the existence and development of Kratovo as an artistic center belongs to Gojko Subotic. In 1989, after the restoration of the murals in the Monastery of St. Prohor of Pčinja, he published a study dedicated to the repainting of the church in 1488-1489. G. Subotic associated those murals with the mural ensembles in the Church of St. Peter and St. Paul in the nunnery of Orlitsa (1491) and the Church of St. Nicholas in the monastery of Gornyak (about 1490). The author finds parallels of that painting also in the images from the Slepče Gospel kept at the Church Museum in Sofia (Church History and Archive Institute inventory No. 340). His thesis is also supported by the data from the ktetor’s inscription in the Church of St. Prohor of Pčinja. According to the ktetor’s inscription the church was painted in 1488-1489 with the donation of Marin of Kratovo, son of Priest Radon. 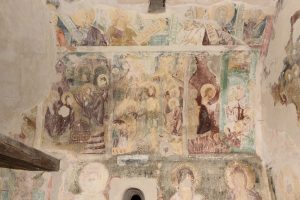 Svetozar Radojčić links one group of monuments from the second half of the 15th century fom the southwestern areas of the Balkans to the personality of Mara Branković who exerted strong influence on a number of political and cultural events after the conquest of the Balkan peninsula by the Ottomans. The study of Radojčić examines the murals in the Church of St. Nicetas in Skopska Crna Gora, the Old Katholikon of the Monastery of the Transfiguration in Meteora (1483), the Church of St. Nicholas of the Nun Eupraxia in Kastoria (1486), the church of St. John the Apostle in the Poganovo Monastery (1499), the Monastery of Treskavec (late 15th century), the murals from the late 15th century in the chapel of St. Apostles in the Church of St. Nicholas Bolnichki in Ohrid.

Later, Radomir Nikolic put forward a new hypothesis according to which another group of monuments having a number of common characteristics is associated with the name of Mara Branković: the Church at the monastery of St. Prohor of Pčinja (1488-1489), the rock Church of St. Nicholas in Gornyak (late 15th century), the murals from the Church of St. George in Ajdаnovac (1492), St. John the Apostle in the Poganovo Monastery (1499), the Monastery of the Assumption in Krepičevac and Lapušnja monastery.

The article of Branka Ivanic “Мара Бранковић и монументално сликарство друге половине 15 века” gives a new glimpse of the painting from the period under examination. The author accepts the thesis of Subotic concerning the so-called studio in Kratovo, and also adds to the work of the same icon-painters a Georgian illustrated manuscript created by Greek and Georgian artists in the monastery of Iviron in 1480s or 1490s. According to Ivanic the monuments of that circle generally follow the 14th-century traditions, on the one hand, and on the other, the approach to the figure building does not match the characteristic peculiarities of the big 15th-century ateliers which developed in Kastoria and Ohrid.

In 2006, Branislav Cvetkovic supported the thesis of G. Subotic regarding the functioning of an artistic studio in Kratovo. He linked the painting from the Monastery of the Transfiguration in Lipovac with the one in the Church at the monastery of St. Prohor of Pčinja, the rock Church of St. Nicholas in Gornyak and the Church of St. Peter and St. Paul in the nunnery of Orlitsa. 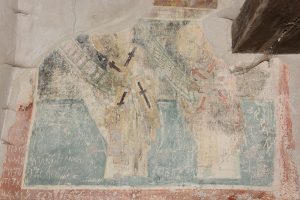 This problem was recently the topic of Milan Mihajlovic’s article “Техника и технология на стенописите от XV век в църквата „Св. ап. Петър и Павел” в метоха Орлица” [Technique and Technology of the 15th-century murals в the Church of St. Peter and St. Paul in the nunnery of Orlitsa] and our joint publication “Към характеристиката на едно балканско ателие от втората половина на XV – началото на XVI век” [On the Characteristics of a Balkan Studio from the Second Half of the 15th – early 16th century]. The two articles examine the technological devices, iconographic and stylistic peculiarities as the analysis shows a number of similarities between the murals in the Church of St. Prohor of Pčinja (1488-1489), Church of St. Peter and St. Paul in the nunnery of Orlitsa (1491), the Church of St. Nicholas in Gornyak (about 1490), the Church of the Assumption at the Mislovshtitsa Monastery (late 15th – early 16th century) and the fragment of a Deеsis icon with saints from Kratovo from the early 16th century.

There are many hypotheses regarding the belonging of the aforesaid monuments and they are point in different directions. The assertion that Mara Branković and her many-sided activity as a patron is related to Kratovo is not certain but such a connection may have existed. As regards the examples stated by S. Radojčić and R. Nikolic one can say that they have been examined quite conditionally and the choice of the authors is influenced by the chronological limits and the location of the monuments. The murals in the dome of the monastery church of the Transfiguration in Lipovac which were linked by B. Cvetkovic to the “Kratovo center” cannot be added to the group of monuments we are interested in as well. The preserved figures differ from those in the church of the monastery of St. Prohor of Pčinja, the Church of St. Nicholas in Gornyak and the Church of St. Peter and St. Paul in the nunnery of Orlitsa in terms of their proportions and other stylistic characteristics. 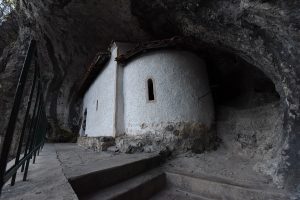 Although there is no evidence of a direct connection of the mural works being examined and the personality of Mara Branković or of the existence of a community of icon-painters in Kratovo the reconstruction of the historical data prompts the scientists to be more and more convinced of such a possibility.

Stylistic features of murals and miniatures are rarely compared in scientific studies because the respective differences exist in the building of the figures and the scale in different types of painting. But it is precisely the hypothesis of a common source that supports the assertion that Kratovo is a principal literary and artistic center. The opinion stated by G. Subotic that the miniatures from the Slepče Gospel are works of the so-called “Kratovo atelier” has been rejected by the specialists. The most recent research of Boryana Hristova, Elissaveta Mousakova and Elena Uzunova has shown that it follows some peculiarities characteristic of the Slepče literary center. In addition one must also take into consideration the existence of a number of  iconographic and stylistic similarities between the examined mural monuments and the Georgian illustrated manuscript from the monastery of Iviron, which is mentioned by B. Ivanic.

But whether Kratovo is the artistic center that encompasses the aforesaid monuments? Unfortunately, there are only two historical references associated with the name of the town: the ktetor of the Monastery of St. Prohor of Pčinja, Marin of Kratovo and the fragment of the icon with a Deesis which originates from Kratovo according to the existing evidence. 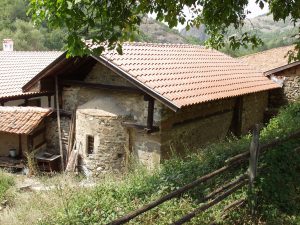 The belonging of certain monuments to a studio that functioned in Kratovo in the second half of the 15h century and the 16th century is hard to demonstrate due to the absence of sufficient historical evidence but we can nevertheless conclude that the icon-painters, who made the murals in the church of the monastery of St. Prohor of Pčinja, the Church of St. Peter and St. Paul in the nunnery of Orlitsa, the Church of St. Nicholas in the monastery of Gornyak, the Church of the Assumption at the Mislovshtitsa Monastery, the illustrated manuscript from Iviron and the icon from Kratovo may have received their knowledge in the same milieu.

One can discern the hands of several icon-painting teams in the said monuments, which is likely the reason that some common iconographic peculiarities are found in some of the compositions but there are also some stylistic differences. A typical feature of this artistic circle is the common approach to the placement and painting of the figures, their gestures and the construction of the background. Despite the similarities a number of differences in the selection of the compositions, the building of some figures, the inscriptions denoting the scenes and the texts of the rolls must also be noted.