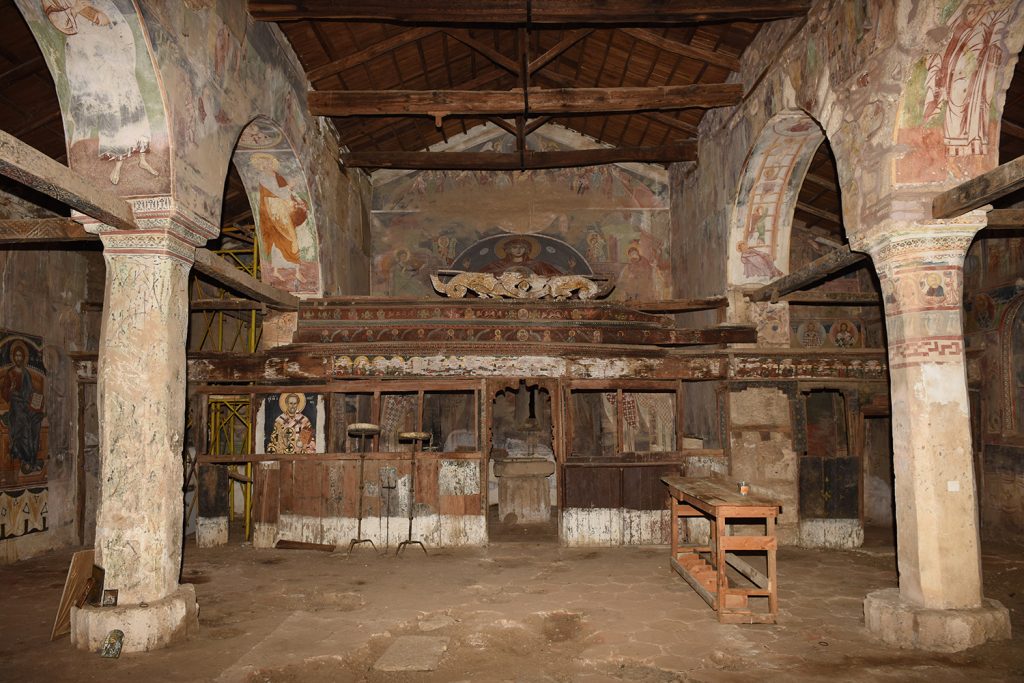 View of the sanctuary and the iconostasis

The village is situated 15 km to the east from the city of Veria, in the graveyard of the Palatitsia village. Its layout is one of a three-nave basilica with one protruding apsis from the east. It is covered by a two-sloped wooden roof. A little later after its erection, a spacious narthex was added from the west which was partially painted in 1591.

According to the ktetor’s inscription on the western wall of the naos, the church was erected and painted by using Dafni’s funds. There is not an unanimous opinion regarding the exact year. A second inscription placed on the southern wall of the prothesis specifies the time when the church was painted: from April to May 1570, and the name of the icon-painter – Nikolaos of Linotopi.

In the altar there are depictions of numerous bishops, deacons and compositions of Eucharistic meaning common for this part of the church. In the central section they are supplemented by the Divine Liturgy, in the prothesis – by several scenes of the Acts and Parables of Jesus while a cycle of St. Nicholas is placed in the deaconicon. 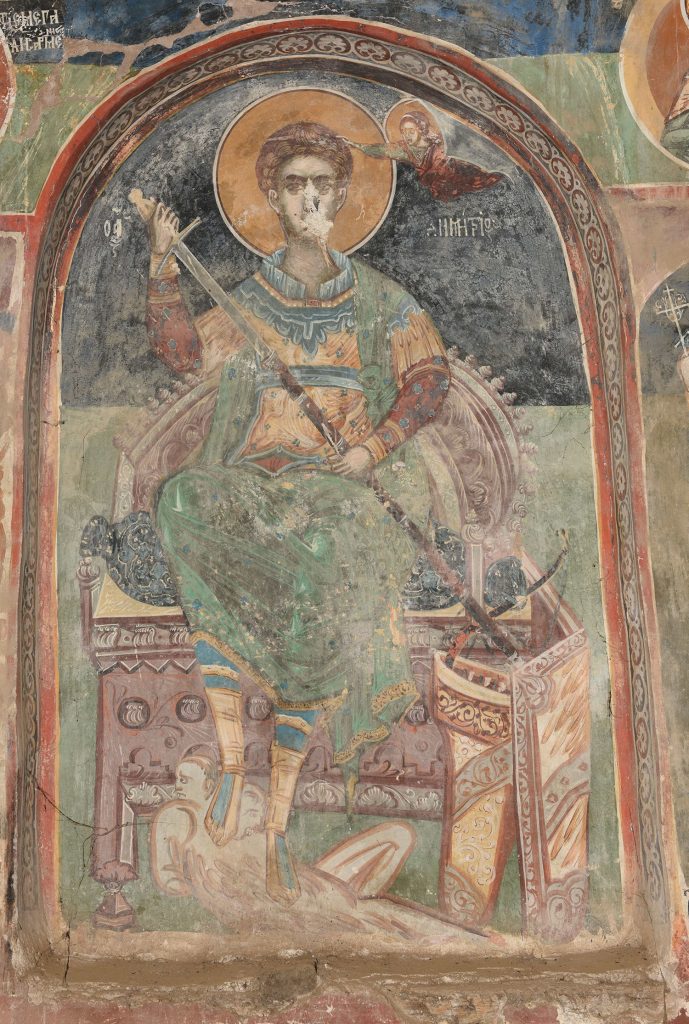 St. Demetrius on a throne: the southern wall of the naos

The cycle of the Great Feasts starts in the central section of the sanctuary and continues into the top area of the entire central nave. In some places it is extended by scenes from other cycles: for instance, some compositions from the life of Saint John the Baptist were added around the Baptism of Jesus, and the Crucifixion was enriched by some episodes related to the death of Christ upon the cross. The same register of the northern section of the nave is filled with scenes of the cycle of the Passion and episodes of the Healings of Jesus. A part of this register in the southern compartment of the nave is destroyed. There are preserved cycles of the Virgin and St. Demetrius.

The middle register is filled with images of saints in medallions. The depictions of martyrs predominate, among them St. George of Kratovo, women-saints, more rarely venerable monks (St. Patapius) and bishops (St. Eleutherius). Full-length saints are presented on the lower register. On the southern wall, in a shallow niche in front of the iconostasis is the depiction of the patron saint of the church – St. Demetrius on a throne, and opposite him, on the northern wall there is a Deesis composition. The remaining depictions are ones of warrior saints, healers, prominent representatives of the monks (including St. Anthony of Veria), hermits as well as Archangel Michael and St. Constantine and St. Helena, on the two sides of the western entrance.

Some parts of the original wooden iconostasis are preserved intact.