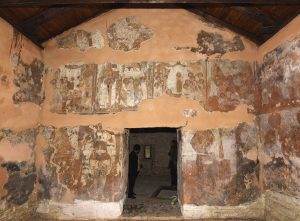 View of the western wall of the nave

A small, one-nave church covered by a two-sloped roof. Later, a narthex was added. We draw information about the construction of the church in 1413 from the 19th-century Greek scientist Ioannis Lambridis who communicated the information from the ktetor’s inscription which is destroyed today. The same source makes it clear that the murals in the church were made by the icon-painter Xenos Digenis from Mouchli in the Peloponnese. The date when they were made is unknown, but it is assumed that they are chronologically close to another mural ensemble made by the same icon-painter – the frescoes in the monastery of Myrtia (1491). About the middle of the 20th century the murals were damaged by fire. Part of the depictions, especially the ones on the southern wall of the nave, are currently destroyed.

In the concha of the altar apsis are depicted the Holy Mother of God, Wider than the Heavens with the Christ Child, the Communion of the Apostles is depicted underneath her and in the lower register there are some officiating Church Fathers. In the altar are placed the scenes common for this space such as the Ascension, the Annunciation, the Vision of St. Peter of Alexandria, the Sacrifice of Abraham as well as the images of two deacons. 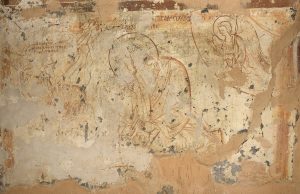 The Sacrifice of Abraham, eastern wall of the altar space

The murals in the nave are divided into two registers. The lower one is filled with full-length figures of saints. The image of St. Demetrius on a horse, separated in a frame stands out on the northern wall, and the depiction of St. George (?), also on a horse, is preserved in fragments on the southern wall as its pendant. St. Nicholas is painted in front of the iconostasis, to the north. In the upper register run some scenes from the cycle of the Great Feasts supplemented by several episodes from the Passion of Christ. On the western wall two feasts of the Theotokos are added: Nativity and the Presentation of the Virgin Mary in the Temple.

On the eastern wall of the narthex, there is a composition of the Last Judgment around the depiction of the Theotokos with the Christ Child on a throne in the patron saint niche.