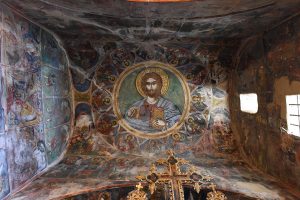 The images in the cross vault of the naos

The church is situated in the center of the village. Its architectural layout is one of a one-nave church covered by two semi-cylindrical vaults as one of them covers the other so that together they form a cross. Some reconstruction works were made in the 18th century which led to the extension of the naos to the west and the addition of an open gallery. The new spaces were painted in 1734 as at the same time part of the original decoration had to be re-painted (almost the entire southern wall in front of the altar). Later the openings of the gallery were walled up.

The icon-painters Michael and his son Constantine of Linotopi who made the frescoes during the first phase of painting, i.e. in the altar, the eastern and the central parts of the naos, left their names in an inscription located above the northern door the naos. In the end of the inscription they also added the date when they finished the murals: 4 November 1619. Probably, an official ktetor’s inscription existed above the western entrance but it was destroyed during the reconstruction works together with the entire western wall of the original naos. 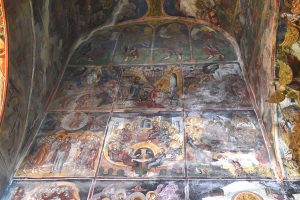 The murals from the northern wall of the naos

The program of the altar repeats almost verbatim the selection and location of the images in the altar of the Church of St. Demetrius in Veltsista (after 1558). The same is also valid for the murals in the naos. There are some more substantial differences in the selection of saints in the registers with medallions and full-length depictions.

Following the pattern of the mural program from the Church of St. Demetrius in Veltsista can be seen in the work of the icon-painter Michael of Linotopi an year earlier when he did the murals in the Church of St. Nicholas in Vitsa (1618).

Both churches, the one in Vitsa and the one in Monodendri, have the same architectural layout as the church in Veltsista. 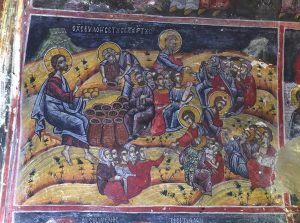